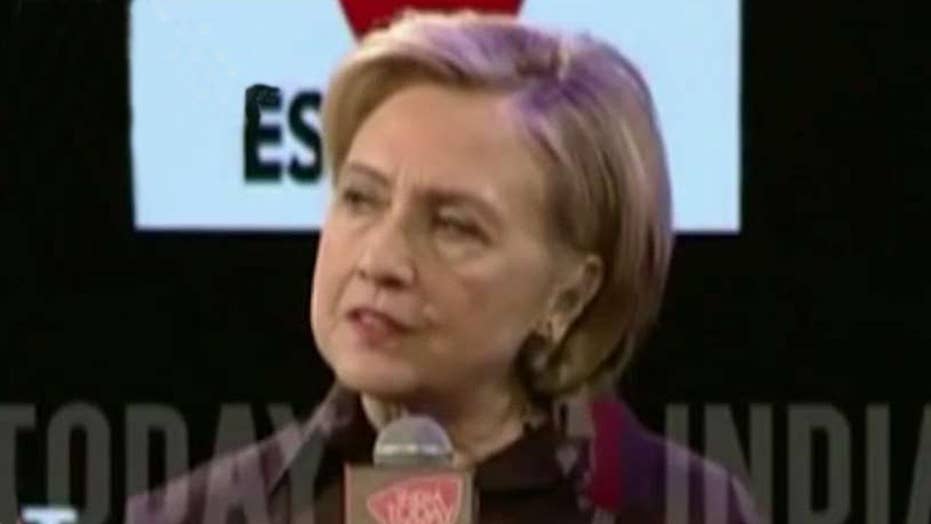 Paints them as anti-black, anti-women.

Great news! Hillary Clinton has finally figured out What Happened! It wasn’t, after all, James Comey or racism or Vladimir Putin or sexism or the hostile media that torpedoed her bid for the White House. Instead, it was…(drumroll please…) millions of Stepford wives, voting the way their husbands told them to.

In her insatiable thirst for redemption Hillary casts an ever-wider net, trying to scoop up those responsible for her defeat. Speaking in India recently, she again revisited her stinging 2016 election loss, this time hauling in white women, who vote the way “your husband, your boss, your son, whoever, believes you should.”

What an offense to the millions of women who didn’t trust Hillary, didn’t like Hillary, and didn’t think she had earned the right to be our first female president.  And what an embarrassment to her party, some of whom have disavowed her comments. Senator Claire McCaskill, for instance, who is battling to be reelected in red state Missouri, criticized Hillary’s remarks; nonetheless, the Republican opponent hoping to dislodge McCaskill wasted no time tying her to Clinton, whom she previously had endorsed.

Republicans hope Hillary will hang around, reminding Trump voters how delighted they are that she isn’t president. More and more Democrats would like her to disappear Stage Left, for good.

The irony is, of course, that Hillary would never have been a candidate for president but for the men in her life. It was husband Bill who pushed her forward from the start and, against all odds, became a beloved leader of the Democratic Party. And she would never have come close to cracking the glass ceiling but for the dogged efforts of President Obama, who saw her as willing to carry on his legacy.

Democrats who put gender ahead of the economy, or jobs, or national security, or who think that their dogmatic positions on abortion or equal pay are the only key to winning elections, are insulting women.

Remember, she was such a terrible candidate that she almost lost the Democratic primary battle to a septuagenarian Socialist who had been in Congress for 24 years and never passed a significant piece of legislation. And that was with the DNC not only rallying behind her but cheating on her behalf as well.

It was Bill who put Hillary on the national stage in 1992, breaking with long-standing convention to give his wife a policy role early in his administration. That she immediately flamed out after trying to craft a health care reform program, offending allies and opponents alike by running roughshod over them, should have raised red flags about her political IQ.

It was Bill who begrudgingly campaigned for her victorious rival Barack Obama in 2008, presumably in exchange for some guarantee that Hillary would win the latter’s backing when her turn came. And it was Bill who lent her his popularity and who pushed her to address disaffected white, working-class voters during the campaign -- advice which she ignored.

The insulting remarks in India were not Hillary’s first broadside against her own gender. During Bill’s first run for president, she explained that she had chosen the unusual path of working while he was governor by saying “I suppose I could have stayed home, baked cookies and had teas.” Though Hillary tried to walk the sarcasm back, women not in the workplace knew they had been dissed.

Hillary is not the only liberal who blames white women for her defeat.  Michelle Obama also railed about how women were, well, wrong to vote for Donald Trump. In a speech in Boston, the former First Lady said, “As far as I'm concerned, any woman who voted against Hillary Clinton voted against their own voice in a way.” Like Hillary, Michelle thinks women were simply following orders: “Well, to me that just says you don’t like your voice. You like the thing we’re told to like.”

Told to like? How about, saw the big picture?

For voters overall, and for women, the economy and terrorism were the top issues in 2016. Hillary flunked on both counts. She promised to continue the economic policies of her boss Barack Obama, who produced the most lackluster recovery in the country’s history. Not only did she propose raising taxes on businesses and the wealthy – though she surely knew such measures would prove harmful to growth – she also came out against what she disparaged as the “gig” economy. This, as Millennials and women, in particular, applaud the flexibility that comes with jobs provided by new start-ups and technological innovation.

On terrorism, Hillary was on more solid ground, since even she had criticized Obama for lacking a robust foreign policy. As she said, “"Great nations need organizing principles, and 'Don’t do stupid stuff' is not an organizing principle." Unfortunately for Hillary, she made those remarks in 2014. By the time the election was in full swing, she had attached herself to Obama’s coattails as firmly as a face is planted on Mt. Rushmore; veering more hawkish on Syria or ISIS, for instance, was simply not an option.

Democrats who put gender ahead of the economy, or jobs, or national security, or who think that their dogmatic positions on abortion or equal pay are the only key to winning elections, are insulting women. Many men and women understand that providing policies that unleash the growth of the economy is essential to the ambitions of our nation. Bolstering our entitlements programs, funding health care for the needy, improving our education system and strengthening our military all require revenues that will only come from an expanding economy.

That growth is what President Trump promised, and what he is delivering. And that is why he won.