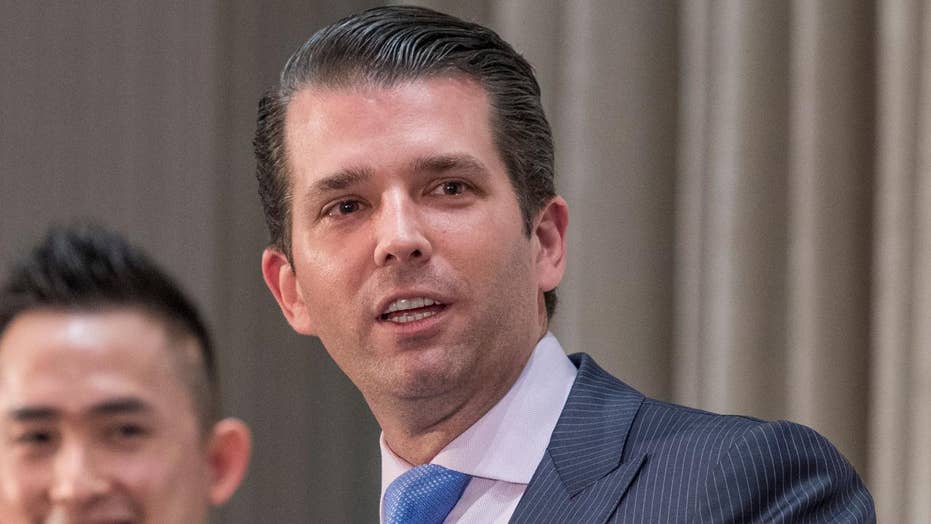 Kevin Corke reports on the White House response to allegations

Just to be clear: if an emissary of Borut Pahor, President of Slovenia, had emailed Hillary campaign apparatchik John Podesta last summer, offering scandalous dirt on Melania Trump, he would have turned down the meeting? Give me a break.

Politics is a dirty game, and the Clinton campaign engaged in numerous underhanded tricks to defeat not only Bernie Sanders, but also rival Donald Trump. Weeks before the election, videos surfaced showing Clinton campaign workers strategizing on how to infiltrate and disrupt Trump rallies. As the New York Times headline put it: “Videos Put Democrats on Defensive About Dirty Tricks.”

What Donald Trump Jr. did in accepting a meeting with someone supposedly linked to the Russian government was dirty, and stupid, but it is not evidence that his father’s campaign “colluded” with Russia to defeat Hillary Clinton. It is evidence, instead, that many involved with the election of Donald Trump were political neophytes, and that the campaign was operating on a shoestring. In a normal campaign, lawyers might have been contacted, red flags would have been issued, and underlings would have taken the meeting. That didn’t happen, in part because there was almost no infrastructure to the Trump campaign.

That said, having a Russia-linked source offer up “dirt” on Hillary Clinton would have been irresistible. Let us remember what was going on at the time. Russia was indeed a big story during the 2016 election, thanks to Peter Schweizer’s book "Clinton Cash." In it, the prize-winning author detailed any number of scandalous situations in which Hillary and Bill Clinton appear to have done favors for political or business allies in exchange for substantial gifts to the Clinton Foundation. Spurred by that best-seller, The Wall Street Journal and others conducted their own investigations into the foundation. The Journal reckoned “…that at least 60 companies that lobbied the State Department during [Clinton’s] tenure donated a total of more than $26 million to the Clinton Foundation.”

Outrage over the Clinton Foundation and about Hillary’s evident “pay to play” proclivities was political fodder for Republicans throughout last year, and rightly so. Money actually changed hands between Russian entities and the Clintons, and favors were done.

Among the most shocking of Schweizer’s charges was that Hillary helped win approval for Russia’s state nuclear agency (in other words, a government entity – directed by President Vladimir Putin) to buy a controlling interest in Uranium One, one of America’s largest uranium mines, in exchange for $2.35 million in donations to the Clinton Foundation. The payments were not made public on the Clinton Foundation website, as was required by an agreement Mrs. Clinton had struck with the Obama administration. Instead, the funds flowed through a Canadian offshoot, the Clinton Giustra Sustainable Growth Initiative, and therefore escaped notice.  (Donations to the Canadian affiliate were included in the White House pact, but ignored by Clinton.)

At roughly the same time, a Russian investment bank staffed with numerous ex-KGB types paid Bill Clinton a $500,000 speaking fee, causing a New Yorker writer to ask, “Why was Bill Clinton taking any money from a bank linked to the Kremlin while his wife was secretary of state?”  Does this resonate? Will Special Counsel Robert Mueller ask the same question? He certainly should.

The uranium deal was important, in that it concerned a large stock of a U.S. strategic asset. Also, the Kremlin had made expanding its access to uranium globally a high priority because it was hard at work building nuclear power plants such as the Bushehr facilities in Iran and similar projects in North Korea and Venezuela. In other words, the Uranium One purchase significantly boosted Russia’s business and diplomatic prospects. As a result, the deal raised national security concerns; numerous Congressmen had petitioned to block the purchase, which nonetheless took place.

Outrage over the Clinton Foundation and about Hillary’s evident “pay to play” proclivities was political fodder for Republicans throughout last year, and rightly so. Money actually changed hands between Russian entities and the Clintons, and favors were done. In that context, Donald Trump Jr. was approached by a Russian source who promised incriminating evidence about Hillary. Who wouldn’t jump at the chance?

There are important challenges facing our country. You wouldn’t know it from following the mainstream media, caught up as they are in faux scandals and the ever-lasting “Russia” story. Democrats and their allies in the press cannot and will not move on from the investigations into Trump’s presumed ties to the Kremlin, even if it hurts the country. To do so would legitimatize the Trump presidency, and focus voters’ attentions on the popular White House agenda – health care reform, lower taxes, infrastructure spending, protected borders, a stronger military and a roll-back of decades of suffocating red tape.

Democrats cannot afford that. They especially cannot afford to have Americans looking for their answers to our challenges – they don’t have any. Which is why Donald Trump, and not Hillary Clinton, is president.