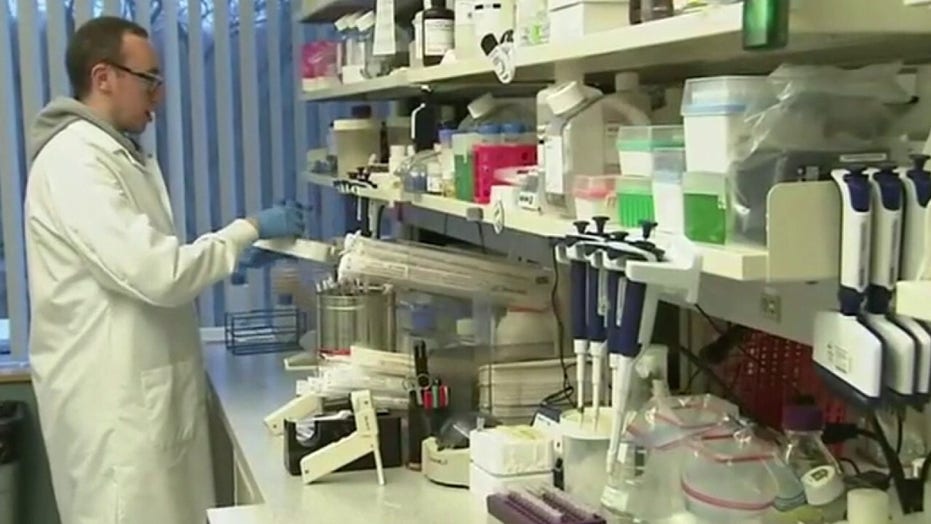 13 patients with coronavirus being treated at Nebraska biocontainment facility

Could the coronavirus be the magic bullet to kill off the Trump presidency? Desperate Democrats certainly hope so; they imagine the spreading disease will knock confidence and our robust economy for a loop, undermining President Trump’s best argument for reelection.

Who can be surprised? The Democratic primary season has launched Sen. Bernie Sanders, I-Vt., the aging socialist from Vermont, to a position where he is likely to lead the party in a chorus of "The Internationale" while leaping off a cliff in November. Toppling the economy could save them from political oblivion.

Nonetheless, even after three years of hateful and harmful “resistance,” this is a new low for Democrats.

Even before a single case of the virus erupted organically in our country (as one now apparently has in California), and even as the administration had acted preemptively and effectively to keep virus carriers out of our country, Senate Minority Leader Chuck Schumer, D-N.Y., House Speaker Nancy Pelosi, D-Calif., former New York City Mayor Mike Bloomberg and others were eager to stoke fear and blame Donald Trump.

That was in response to the White House attempting to reposition already-approved funds in order to prevent the spread of the virus. Why would the Trump administration do that? Because they fully anticipated that Democrats in the House would play politics with any Trump budget request – even one attempting to save lives. And they were right.

Pelosi’s criticisms on this topic are tough to swallow. The House speaker, after all, represents a state where thousands of people live on filthy streets, leading to severe outbreaks of typhoid and bubonic plague, which was known as "Black Death" during the Dark Ages. Those were much deadlier diseases than the new virus emanating from China. Her concerns about the health of the nation are apparently episodic.

Attempting to show leadership, Pelosi visited San Francisco’s Chinatown and made fortune cookies to demonstrate confidence that the area was safe. However, businesses in that part of her city have suffered a sharp drop of activity. She toured in the dark as Pacific Gas & Electric, the bankrupt utility serving the region was experiencing (routine) power outages. Maybe Pelosi should work on that little issue as well.

Schumer railed about the White House’s handling of the virus, saying it showed “towering and dangerous incompetence.” He further accused the administration of having “no plan to deal with the coronavirus … and seemingly no urgency to develop one.” Like so many other Schumer claims, this just isn’t true.

In January, Trump convened a task force that included experts such as Dr. Anthony Fauci, director of the National Institute of Allergy and Infectious Diseases, one of the nation’s leading experts on infectious diseases. They immediately restricted incoming visitors from impacted areas, declared a public health emergency and drew down existing funds to put new measures in place.

The White House is also coordinating a rapid and promising development of vaccines and therapies with the pharmaceutical industry – an industry, by the way, from which Sanders promises to wrest all profits. Someone needs to ask: why would those firms develop new drugs in the future?

Democratic hopeful Bloomberg charged the president with firing our nation’s “pandemic specialist” two years ago and said Trump had defunded the Centers for Disease Control and Prevention.

Neither of those charges is true, but when have anti-Trumpers ever let the truth stand in the way of denouncing the president? When has the liberal media, which routinely calls out Trump for misstatements, ever bothered to fact-check their pals on the left?

As it happens, the “pandemic expert” Rear Adm. Timothy Ziemer, who Trump appointed in 2017 as senior director for Global Health Security and Biodefense at the National Security Council, left as a result of an NSC reorganization undertaken by John Bolton. Today, Ziemer serves as senior deputy assistant administrator for the Bureau for Democracy, Conflict, and Humanitarian Assistance (DCHA) at USAID.

As to defunding the CDC, it is true that the agency’s proposed budget has included certain cuts in fiscal 2019 and 2020, as critics have charged. However, in each year the agency has asked for more – not less – funds with which to combat infectious diseases.

As stated in last year’s budget overview: “The FY 2020 request includes $50.0 million for the Infectious Diseases Rapid Response Reserve Fund that was created in FY 2019, bringing the total amount to $100.0 million.” Another $50 million was added to the funding for “Global Health Security” and $50 million more dedicated to the agency’s “Infectious Diseases Rapid Response Reserve Fund.”

Does that sound like a group ignoring this issue?

Democrats and liberal media types have no idea what level of funding will be needed to combat this new virus. Schumer blasted the president for requesting only $2.5 billion in new funds, saying that the correct number was $3.1 billion. A day later, Schumer ratcheted his request up to $8.5 billion with zero explanation.

Schumer’s attacks on the Trump White House have become ever more vitriolic and abhorrent. What is most reprehensible is that he and other Democrats appear eager to see this go badly. What does that say about the moral character of these people?

Sadly, mistakes will be made, and it may be that some people in the U.S., as elsewhere, will die. But this is a moment for the entire country to come together and work for the public good. Name-calling and blame-shifting are unacceptable.

I am confident that we can beat the virus. I wonder, though, if our political leaders are capable in this era of working for the public good. Let us hope so.