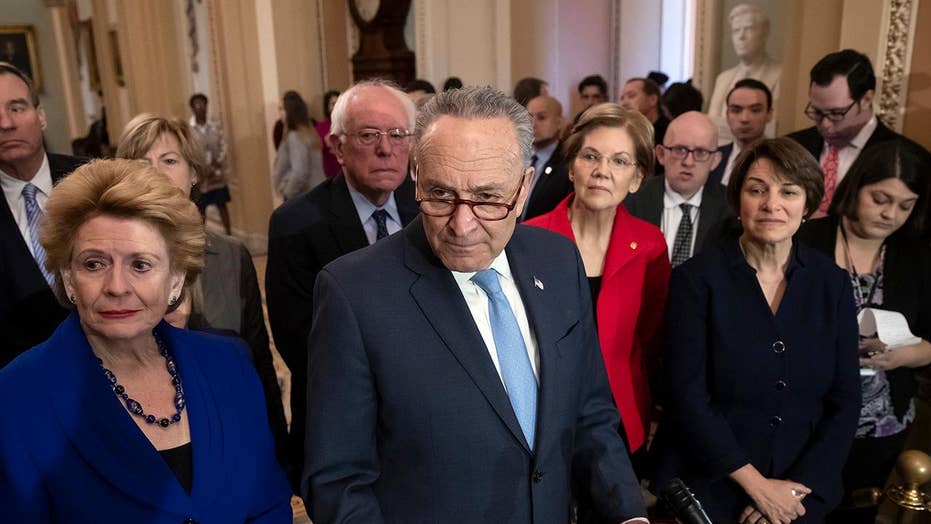 Is party disarray a sign of things to come for Democrats?

With Dems disagreeing over health care, what does this mean for the rest of their agenda? GOP strategist Amy Tarkanian and Democratic strategist Antjuan Seawright debate.

New York Senator Chuck Schumer tweeted last week: “We have tremendous unity in our caucus. That unity has been our strength, and it will continue to be as strong as ever in the 116th Congress.”

Mr. Schumer knows better. Democrats are not unified at all, as the skirmishes over leadership positions in Congress have shown. Word has it that Mr. Schumer was reelected Minority Leader by acclamation,  but that unanimous vote posed a problem for Kyrsten Sinema, newly elected Democrat senator from Arizona, who had promised to oppose him.

Forced to explain why she broke a campaign pledge, Ms. Sinema, who ran as a moderate in her reddish state, said, “Had there been a challenger for minority leader, I would have considered new leadership and a fresh perspective.”

Meanwhile, former House Speaker Nancy Pelosi is in the fight of her life to regain the Speaker’s gavel. Many still expect the unpopular representative from California to succeed, but the emergence in recent days of a possible rival – Ohio Representative Marcia Fudge – could give her opponents a boost. Up until now the dozen-plus Democrats who have openly contested her election have had no one to rally around. Now they do.

Skirmishes over leadership posts are nothing new, for either political party, but Democrats face more than power struggles. They face serious discord over policy, with the progressive left clearly at odds with establishment figures like Schumer and Pelosi, and with party members who represent red states.

In coming months Mr. Schumer and his counterpart in the House will play ringmasters to a slew of newly elected Democrats eager to challenge establishment liberals like himself. These disrupters, like New York Rep. Alexandria Ocasio-Cortez, have already shown a lack of respect for the traditions and hierarchies of Congress. Moreover, they embrace policies anathema to mainstream voters who will likely determine the outcome of the 2020 elections.

Mr. Schumer is going to have his hands full.

Republican leaders in Congress, like House Speaker Paul Ryan and Senate Majority Leader Mitch McConnell, might be forgiven a moment of schadenfreude. They have frequently had trouble corralling their own disparate elements, like the Freedom Caucus in the House. The embarrassing failure to upend ObamaCare came down, ultimately, to fundamental disagreements about the role of government in providing health care.

By contrast, Democrats have, in recent years, mostly sung from the same songbook. That is about to change.

Consider the divide between Senator Jon Tester from Montana and the progressive Ms. Ocasio-Cortez.

On gun control: Ocasio-Cortez backs universal background checks, a ban on assault weapons and high-capacity magazines, and, on her website says she “wants to require Congresspeople to take no money from the gun lobby or private equity companies that invest in the firearms industry.” Questionable syntax aside, Ms. Cortez essentially advocates abolishing the rights upheld by the Supreme Court in Citizens United v. FEC.

In this past cycle, there was no unifying theme for the Democrats other than disapproval of President Trump. That wasn’t strong enough to take the Senate this year, and it won’t be enough to win the White House in 2020.

Jon Tester has a different position on guns: he loves them. Campaigning in Montana, Tester touted his votes in support of the Second Amendment, and his opposition to banning high caliber weapons. He furthered his gun-toting credentials by bragging during his reelection run that he had shot hundreds of cows and hogs on his farm, and also gophers. Videos of the senator plugging docile farm animals have been circulating online.

On climate change: Ms. Ocasio-Cortez made headlines when, on her freshman orientation tour, she joined a sit-in in former House Speaker Nancy Pelosi’s office demanding action to prevent climate change. More recently the New York progressive advocated for a sweeping Green New Deal, under which 100 percent of U.S. power generation would come from renewable sources, in ten years. The “deal” also requires total “decarbonization” of the manufacturing, agricultural and other industries as well as of transportation and other infrastructure.

Jon Tester, hailing from the state with the nation’s largest coal reserves, as well as substantial oil and natural gas production, supports an “energy economy powered by Montana commonsense,” as he states on his website. In 2016 he introduced legislation to expand carbon capture tax credits, which provides tax credits to coal power producers and companies that capture carbon dioxide from their units. At the time he noted, "Coal plays a pivotal role in Montana's energy future. While some folks around the country are turning their backs on coal, I am pushing to expand the Carbon Capture Tax Credit to provide coal country with more financial certainty and encourage American innovation and investments in clean coal technology."

On health care: The New York freshman advocates Medicare for All, and “people-centered” health care, as opposed to health care centered on, for instance, forest creatures.  She says on her website that her proposal will drive down costs “by allowing all people in the US to buy into a universal healthcare system.” In interviews, she has repeatedly deflected questions about who will pick up the estimated $33 trillion tab for such an adventure.

A year ago, when Bernie Sanders introduced his “Medicare for All” bill, Jon Tester opposed it. He said at the time, “I support fixing what we got because I think that’s more likely to happen.” Tester voted for and supports ObamaCare, even though he admits that “there were plenty of mistakes” made with the bill, and even though premiums have increased in his state by 133 percent between 2013 and 2017.

Tester and Ocasio-Cortez may represent the outer fringes of Democrat opinion, but there are plenty who fall nearby, on both ends. Tensions will mount as party leaders try to reward the voters who gave them the majority in the House by writing and passing legislation; there will be winners and losers.

In that process, party leaders will hope to mold a coherent platform for 2020; it won’t be easy. Not easy, but necessary. In this past cycle, there was no unifying theme other than disapproval of President Trump. That wasn’t strong enough to take the Senate this year, and it won’t be enough to win the White House in 2020.