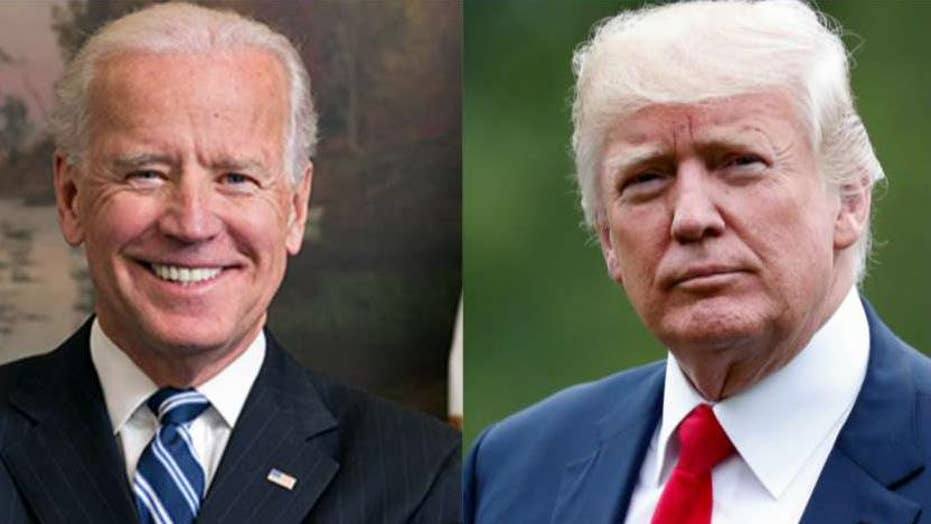 Trump trails Biden in polls ahead of campaign kickoff; Peter Doocy has the details.

Former Vice President Joe Biden currently leads the Democratic herd running for president, because voters see him as the candidate most likely to beat Donald Trump.

Are they kidding? After watching the energy, the excitement and the sheer numbers of people who turned out to cheer President Trump’s kick-off rally in Orlando, can anyone seriously imagine Biden winning a face-off between the two?

So far in this race, Biden has failed to draw any sizeable crowds, even at his launch event in Philadelphia, where a disappointing few thousand turned up. It isn’t a Democrat issue; Sen. Kamala Harris, D-Calif., Sen. Bernie Sanders, I-Vt., and Sen. Elizabeth Warren, D-Mass., can pull in the fans. Just not Uncle Joe. 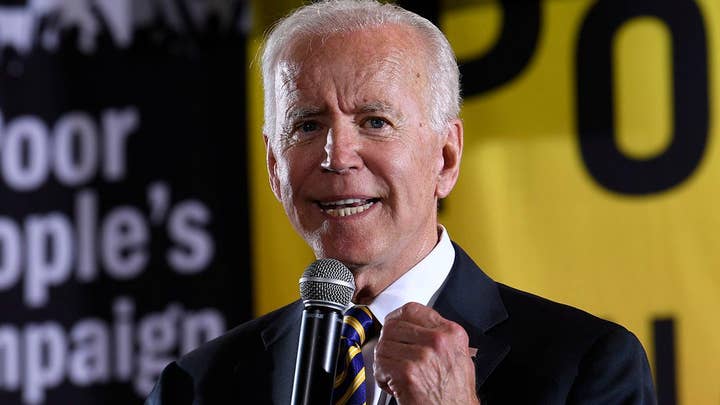 Let’s face it: Biden, by comparison to Trump, looks tired and timid. At his first campaign rally, he frequently stumbled over words and got tongue-tied; he seemed old. That’s not nice to say, but it’s true.

This reality is about to take Biden down. Next week Biden will have to mix it up with his rivals, in the first planned debates of the primary season. So far, he has managed to avoid such encounters but in Miami, he will share the crowded stage with nine other contestants, each desperate for a chance to shine.

Unhappily for the former vice president, in the first Democratic debate, he will go up against Sanders, Harris, Sen. Kirsten Gillibrand, D-N.Y., and perhaps most important, Pete Buttigieg, among others. The comparisons will not favor Biden. Buttigieg is young, articulate and insufferably “woke;" he will look like the future. Sanders, for all his nuttiness, oozes passion and energy. Harris and Gillibrand are stark reminders: Biden won’t break any glass ceilings.

If the moderators press the candidates to back up their progressive promises or to top one another’s commitment to free college, open borders, full-term abortion, "Medicare-for-all," or drastic climate agendas, Biden will falter. He cannot possibly emerge the most committed on any of those platforms, because he is not. He has only in the past several months been dragged into the progressive mainstream, visibly uncomfortable.

For the millions of Democrats who identify as “moderate” that’s to his credit, but not for those who typically turn out to vote in the primaries. In Iowa, the first primary state, exit polls show 68 percent of voters to be “liberal;" New Hampshire, another early primary state, looks roughly the same. Voters in those states won’t be looking for moderation; they’ll be looking for someone who despises the established order, who wants to reinvent our country and throw out the values and system that made it great.

When Biden talks of working across the aisle, or says impeachment is a “giant distraction," they will impugn his integrity. Already Biden is under fire for fondly recounting how he once worked with now deceased Senators James Eastland and Herman Talmadge – both unrepentant segregationists and apparently, according to Joe, excellent collaborators. Folks, the intolerant mob won’t stand much of that.

In addition, Biden’s vulnerabilities will be on full display next week. Harris can go after Uncle Joe on his past support for Bill Clinton’s 1994 crime bill, Sanders can chide him for cozying up to Wall Street, Gillibrand can criticize his touchy-feely excesses with women and Buttigieg can question his support for the Iraq war.

In short, Biden’s decades of public service will haunt him on that debate stage.

Biden is likable and his eight years of serving under President Barack Obama earned him a huge lead as he entered the race. He jumped in on April 25; by the first week of May, he had won over 41 percent of Democrats. That advantage has now shrunk to 32 percent as Elizabeth Warren, in particular, has gained traction.

Biden owed his early lead in large part to the perception that the former Veep had the best shot of beating Trump.  The most recent poll has Biden ahead of Trump by ten points nationally, 49 percent to 39 percent.

Does anyone actually believe those polls? Apparently, big money donors do. Wall Street is showering campaign contributions on Biden, desperately hoping that he turns out to be the nominee. This week alone Biden raked in a record-setting $500,000 at a fund-raiser hosted by short-seller Jim Chanos, at which attendees forked over $2,800 apiece; other such big buck events have Biden hinting of an overall haul approaching $20 million. 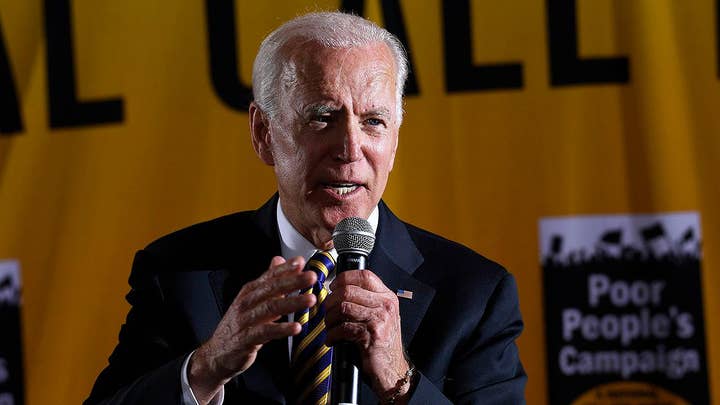 But that money raising is a no-no among progressives. Warren has pointedly called him out on it, tweeting recently: “I don’t spend time at fancy fundraisers. Instead, I spend my time meeting voters and thanking grassroots donors who chip in what they can.” Bernie’s team piled on, with his campaign manager tweeting that Biden is “raising huge sums of money at large fundraising events all across the country. And these are not grassroots fundraising events."

Already, such comments have Biden playing defense, saying in response to a question on the matter: “My lord, this idea of Biden’s the big donor guy, come on. I’ve eschewed any relationship with any PACs.”

No one wants to be playing defense at this point in the race.

Voters will wonder, why is Wall Street eager to fund Biden’s race? The answer is that establishment Democrats see the former Veep as far less threatening than his progressive rivals. They fear the higher taxes and amped up regulations that Warren and others promise. They know the Green New Deal could undermine our economy, and understand that Biden will, at the end of the day, take a middle road.

Will Democratic primary voters agree? Or will they demand the uncompromising progressive stance that appears the source of energy in the party? Will they select Biden as the most likely to beat Trump or abandon him when they see he is incapable of beating anyone?

Next week’s debate will provide some clues, and could shake up the race. Almost certainly, the odds will lengthen for Biden.