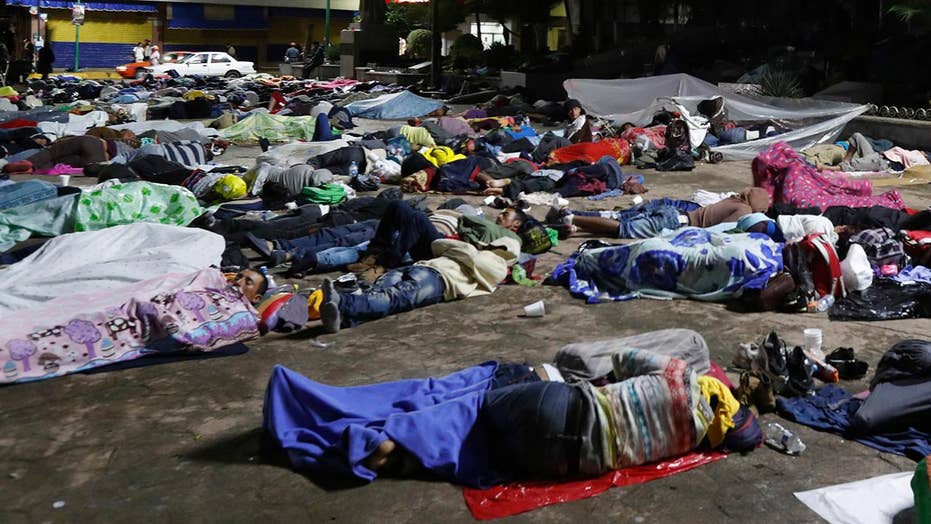 President Trump threatens to cut off funding for Guatemala, Honduras and El Salvador as migrant caravan marches toward U.S.; reaction and analysis from the 'Special Report' All-Stars.

Ever since President Trump came down a golden escalator in 2015 to announce his candidacy, the national conversation surrounding illegal immigration has never been the same. But what is often missed in his blunt talk and the hysteria it creates is that President Trump understands Americans’ desire for law and order. He also understands their need to feel safe.

The recent caravan of thousands of migrants from Central America who are seeking asylum in the United States underscores that point. While the media focuses solely on the humanitarian aspect of it, images and video of migrants lawlessly tearing down the gates into Mexico are a stark visual reminder of the need for increased border security. With only two weeks until Election Day, President Trump should hammer this point home.

By labeling himself the “law and order” candidate, Trump made immigration a winning issue for his 2016 campaign. Once again, Republicans are on the offense on the issue of immigration by focusing on sanctuary cities and liberals’ calls to abolish ICE. A recent memo from the liberal think tank the Center for American Progress warns Democrat candidates in competitive races that Republicans’ “sanctuary attacks pack a punch.” They warn Democrats to pivot to other issues.

Even when President Trump was getting hit the hardest from the media over his zero tolerance policy for families illegally crossing the border, Americans wanted law and order. In the midst of the debate, Harvard-Harris polling showed that 70 percent of Americans wanted stricter enforcement of our immigration laws and 61 percent believed our current border security is inadequate. A staggering 84 percent of Americans opposed sanctuary cities and 69 percent opposed abolishing ICE.

President Trump has also changed the dynamics of the immigration debate by giving a face to those who have been negatively impacted by it. During his State of the Union address, he told the stories of two teenage girls - Kayla Cuevas and Nisa Mickens - who were brutally murdered by MS-13. He also highlighted how their murderers took advantage of loopholes in our laws to enter the country as unaccompanied minors.

The migrant caravan represents everything that is wrong with our nation’s immigration system.

As the caravan approaches the United States, President Trump should once again talk about the ways our laws are being exploited. Since he ended his zero tolerance policy, there has been an 80 percent increase in families illegally crossing the border. In the month of September alone, U.S. Border Patrol agents arrested 16,658 family members - the highest one-month total on record. There will continue to be caravans of people heading to the United States because our immigration system is broken.

The initial threshold for claiming asylum is so easy that 80 percent will pass their first interview with a U.S. Citizenship and Immigration Services Asylum Officer, and will get released to appear in court. However, only 20 percent will be granted asylum in immigration court. That means that 80 percent of the claims are either frivolous or the individual never showed up to court. The individuals who are denied asylum are ordered to return to their home country but many will ignore the order and become immigration fugitives instead.

President Trump should also use the caravan to call on Congress to make changes to our immigration laws. In particular, raising the bar for what qualifies as asylum, closing loopholes in a 2008 anti-human trafficking law, and making changes to the Flores decree. While Mexican unaccompanied minors can be quickly sent back to their home countries, Central American minors cannot because of a loophole in the Trafficking Victims Protection Reauthorization Act. The Flores decree limits the amount of time children can be detained with their parents to 20 days or less, which is not enough time to adjudicate these cases.

With just two weeks until Election Day, the migrant caravan represents what is wrong with our nation’s immigration system. President Trump and Republicans should welcome this political gift with open arms and use it to score electoral wins by focusing on immigration.