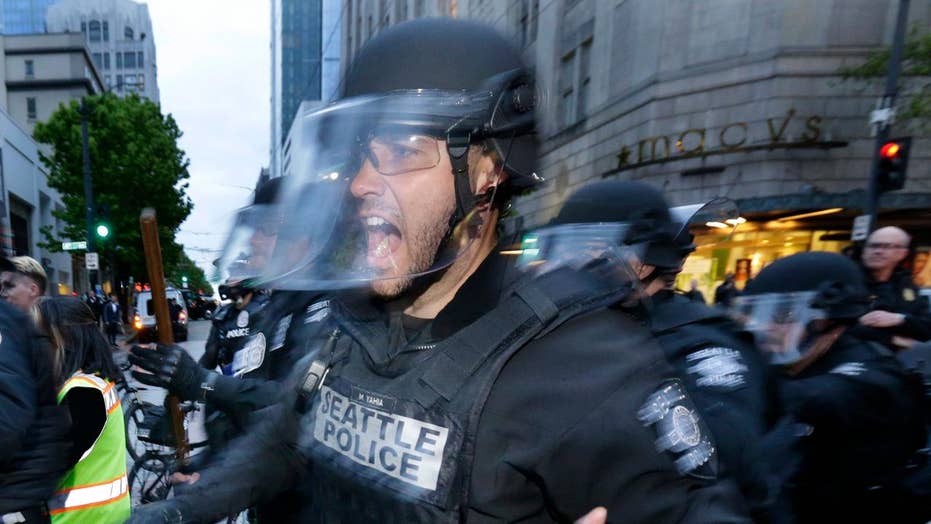 Why has the left gotten so violent?

Tea Party protests from the right were largely peaceful a few years ago. But unrest from the left, from Berkeley to May Day protests in Oregon, has been marked violence. Tucker takes on immigrant activist Jose Antonio Vargas #Tucker

Liberal commentator Noam Chomsky once wrote, “people with power understand exactly one thing: violence.” His alt-left supporters must have been paying attention. As a result, the liberal cold war against the right has escalated from demonization to intimidation, harassment and violence -- with Trump administration officials and members of Congress as prime targets.

You can thank media outlets for escalating the tensions and urging left-wing shock troops to declare war on the right. HuffPost went so far as to encourage harassment of Trump officials and pundits, calling for them to, “be hounded by protestors [sic] everywhere, especially in public.” HuffPost is led by a supposedly respected former New York Times editor Lydia Polgreen.

The left’s insanity has gained momentum from incidents during the campaign and turned into an avalanche of crazy -- less than four months into President Donald Trump’s first term. In that time, we’ve had three riots in Berkeley, Calif., and an inaugural riot so bad that 200 people have been charged with felonies. One of those has already been convicted. So-called “antifa” attacks on Trump events are now common and conservative speakers like Ann Coulter have to cancel events out of a fear of violence. A Portland, Ore., parade was shut down for similar threats against the right. The ironically-named Students for Justice in Palestine just shut down a pro-Israel event at The University of California, Irvine, shouting “f*** you” at attendees.

One Tennessee woman was so upset over media hype about the health care vote that she reportedly, “tried to run Rep. David Kustoff (R-Tenn.) off the road,” according to The Washington Post. (Apparently, no outlet was willing to tell her how bills become law in D.C. as a compromise between House and Senate.)

Rather than just report the attack, left-wing websites rationalized it. Buzzfeed was one of the worst, even helping fundraise for the reported attacker. The story ran under the stalker-friendly headline, “Friends Say Woman Pursued Congressman Because She Thought He Was Ignoring Her.” The story presented the accused as simply someone who “wanted to discuss” the congressman’s vote. The fundraising page Buzzfeed linked to no longer appears on YouCaring.

Jezebel also blamed the victim, explaining that the incident happened, “four days after helping to pass a bill that will leave millions of Americans stranded without access to health insurance.” The site is part of Hillary Clinton funder and Univision CEO Haim Saban’s “news” operation that was included in the Gawker purchase. Slate also tried to rationalize the attack. It led its story by saying, “Feelings are running high over the Obamacare repeal and replace vote.” That’s a rationalization for violence any time anyone is unhappy about politics and that’s every single day.

It’s hard to track all the incidents. There are just too many. Republican Rep. Tom Garrett received a series of threats, according to Politico. One read: "This is how we're going to kill your wife." An out-of-control constituent stuffed a wad of cash into another congressman’s collar at a townhall meeting. Nebraska Republican Jeff Fortenberry had an offensive sign placed on his lawn reading: “Traitors put party above country. Do the right thing for once, s**thead.”

This outrage cycle was as predictable as the seasons. Liberals have spent more than a year trying to make Trump look like a “lunatic” combination of Hitler, Stalin and Pol Pot. They, and journalists, have so incensed the left’s supporters that now they, too, have lost their minds.

The left’s dementia has evolved from the talentless song, F*** Donald Trump, and fantasies about “blowing up the White House,” or shooting that “motherf***er.” That was relatively tame by comparison to where we are today.

In just the last few days, Democrat Rep. John Lewis used a commencement speech to urge Massachusetts College of Liberal Arts graduates to “get in the way, get in trouble.” Listicle site Buzzfeed’s staffers joked on internal social media that,“Maybe someone will assassinate him,” meaning Trump. But an old reliable went even farther. GQ’s shock monkey Keith Olbermann even urged foreign intelligence agencies to target Trump because somehow America has become victim of a “coup.”

If you tell readers and viewers often enough that Trump is another Hitler and he’s pulled off a coup, you are encouraging the unhinged to violence. It’s long past time for journalists to pretend once more that they are neutral and stop trying to boost careers and lefty causes by taking down the Trump presidency.

But there’s not a chance in hell they will change -- except to get worse.