The Virginia governor’s race is neck and neck with just a few days before Election Day. Naturally, that means the media are defending the Democratic candidate like a rabid pitbull fighting for a bone.

Former Democratic Virginia Gov. Terry McAuliffe has made more disastrous gaffes than a Joe Biden presser, though the news media rarely latch onto them.

Then the media let loose the hounds. They attacked Youngkin, covered up the rapes and ignored parents who opposed teaching racism in school. You know, what they like to call journalism. 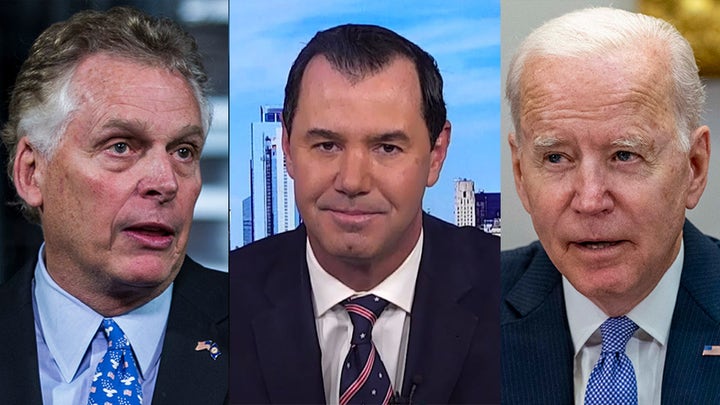 MSNBC depicted Youngkin as either an "insurrectionist" or one of the "right-wing, racist, authoritarian wannabes." Or maybe an anti-Semite. If MSNBC could find a way to blame Youngkin for the Civil War, Pearl Harbor or the Black Death, they’d do it.

Well, they have a few days left.

Here are just some of the head-slapping highlights from the mainstream media’s McAuliffe-Youngkin campaign coverage.

1. The election got caught in an already contentious schools fight. One Loudoun County teacher resigned during a school board meeting. She told the board she refused to be part of the "machine that tells me to push highly politicized agendas to our most vulnerable constituents – children."

Then McAuliffe made the situation much worse, admitting, "I don’t think parents should be telling schools what they should teach." Parents felt otherwise.

Cue the media defenders from CNN’s "Inside Politics." CNN analyst Margaret Talev of Axios put on her McAuliffe PR hat, claiming "it sounds to me like what McAuliffe is trying to say is I'm not going to let irresponsible parents who are against science terrorize school administrators into making your kids unsafe." 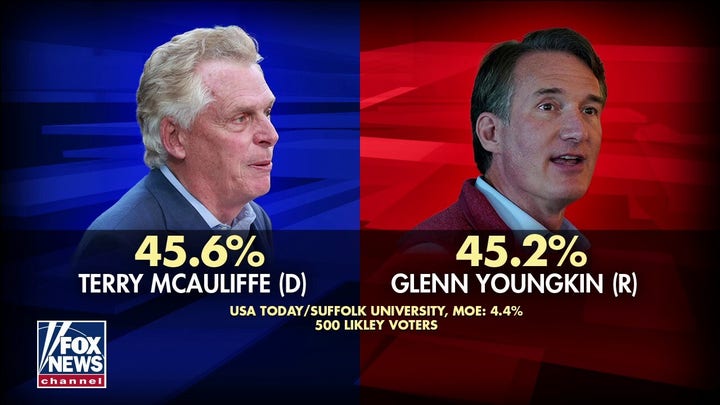 Host John King characterized the statement as "stepping in it" and rationalizing, "Anything you say can and will be edited and used against you and well maybe it's a little out of context."

2. Even the ultra-liberal Washington Post had to admit McAuliffe lies a ton about coronavirus numbers. "Terry McAuliffe keeps inflating coronavirus numbers," it wrote. On Oct. 7 he pretended 1,142 children were in ICU beds. "For the week ended Oct. 2, the number of children in hospitals, not necessarily in intensive care, was just 35," the paper corrected.

He lied about the virus so many times that the Post fact-check gave him four Pinocchios — the maximum.

3. MSNBC "Morning Joe" namesake Joe Scarborough brought on McAuliffe for a softball interview and then whined to him that Youngkin wouldn’t come on the anti-Republican show. It was a bit like a slaughterhouse sending party invites to a bull.

Joe then accused Youngkin of "anti-Semitism" simply for criticizing leftist billionaire mega-donor George Soros. Soros threw at least $50 million into the 2020 race, according to the Washington Free Beacon. Apparently, you can’t criticize him though he funds almost every major far left agenda item.

DAVID AVELLA: VIRGINIA IS THE STARTING LINE TO DEFEATING DEMOCRATS IN 2022

This was typical for Scarborough, who hilariously claimed "I’m a small government conservative." In reality. He turncoated the GOP so long ago he got a nasty letter from Abraham Lincoln.

4. No list is complete without MSNBC’s reigning vitriolic host Joy Reid. She brought on the wannabe repeat governor to mock the citizens of the very state he hopes to govern.

Reid certainly did her part, abusing parents who are worried about the leftist politics in the classrooms. She accused them of "white grievance politics."

It’s worth noting that the left that used to complain about race in stories now uses the word "white" as a term of derision. She accused them of wanting to create an "Andrew Jackson is the greatest hero of all time curriculum in schools."

McAuliffe eagerly joined in, sticking to Reid’s fiction that there is no critical race theory in schools. He claimed parents were involved in a "a made up, racist dog whistle."

5. Desperate for allies, McAuliffe washed away the blackface scandal of Virginia’s current Democrat Gov. Ralph Northam. That incident was so stupid, CNN actually wrote about it. "McAuliffe dismissed Northam yearbook photo as youthful mistake at 2019 event months after calling it racist 'at any age.'"

The Washington Post blacked it out. Their site has only one mention of blackface in the past month and that was about Shakespeare. The Post already let Northam wriggle out of the scandal once. Now it’s giving the same courtesy to his would-be successor.

This is the same outlet that destroyed the career of Sen. George Allen for using the word "macaca," an insult so obscure that about 12 Americans knew what it meant — likely not including Allen.

Even the Associated Press admits the why for all of this press spin. Democrats and their media allies are terrified Youngkin might win. "A McAuliffe loss on Tuesday would reverberate across the national political landscape, likely triggering all-out panic among Democrats," it explained.

This is all about propping up Democrats. It’s only a short trip from Richmond to 1600 Pennsylvania Avenue and journalists are terrified Republicans are already on the way.