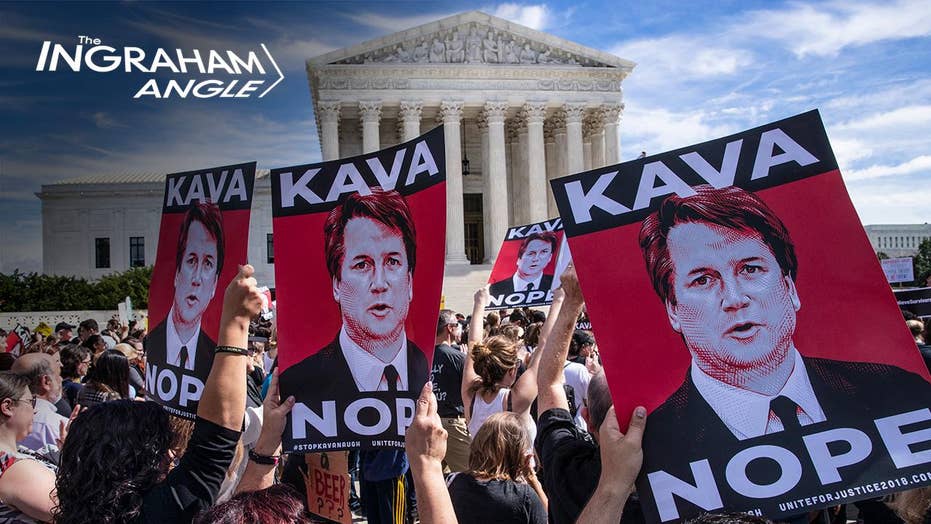 On Tuesday, Laura Ingraham anticipates the FBI’s report on Supreme Court nominee Brett Kavanaugh which could be delivered as soon as tomorrow. Then later, Laura reacts to the extreme academic resistance against Kavanaugh. Plus: Laura discusses the hostile activism of the left.

The left is moving in lockstep in its sleazy effort to obliterate not only the Supreme Court confirmation of Brett Kavanaugh, but the man himself.

We've seen Soros-funded activists confronting senators in elevators to stall Kavanaugh's confirmation along with choreographed impromptu press conferences and rallies. We've seen Hollywood stars staging their tedious walkouts to urge the Senate to vote against Kavanaugh. And now academia has engaged, so watch out.

"Look at this chorus of entitled white men justifying a serial rapist arrogated entitlement. All of them deserve miserable deaths while feminist laugh as they take their last gasps. Bonus, we castrate their corpses and feed them to swine? Yes."

So, no longer content to indoctrinate our children, academic liberals like Fair are now advocating violence against conservatives. When she was exposed by Campus Reform, the professor accused them of bullying her. Now, she's a damsel in distress.

I thought they could take care of themselves.

In a blog post, she insisted, "My choice of words is intended to make you uncomfortable because I and tens of millions of women in this country aren't comfortable with the ongoing war on our bodies, our lives and our fundamental freedoms."

Help me out here. Men should have their genitals mutilated, then fed to animals to give her control over her body? She’s going ot have to tell me how that works.

What's really shocking is that Georgetown is standing by this left-wing nutbag. Are these the Jesuit Catholic values the university is so proud of?

They claim her comments were private and not the views of Georgetown. But this is a woman who on social media has called Trump supporters “MAGA-gets,” and Trumpan-zees.

Can you imagine if a conservative academic, if there are any, referred to a Democrat politician’s supporters as “simians” or anyone for that matter as a “monkey”? Someone owes Roseanne an apology! This professor is a true lefty hater. Here’s what she said about Trump and the Iran agreement:

“Trump, and I won't use the preface, president, what Trump has done, largely under the influence of Israel, has been [doing] everything it can to sabotage this Iran agreement.”

I'm sure Trump is losing sleep over the fact that she is not calling him "President" Trump.

Just as a comparison, at Catholic University, also in Washington, D.C., Dean Will Rainford had the nerve to question Christine Ford's credibility on Twitter.

"Swetnick is 55-years-old, Kavanaugh is 52-years-old, since when do senior girls hang out with freshman boys?" he wrote. "If it happened when Kavanaugh was a senior, Swetnick was an adult drinking with, and by her admission, having sex with underage boys. In another universe he would be the victim and she the perp.

Well, for that completely kind of fact-based opinion, Dean Rainford was suspended by Catholic U for the semester and forced to write an apology. He didn't even threaten anybody's life!

By the way, a suspension wasn't good enough. On Monday, angry protesters stormed the university demanding that the dean resign.

Liberals have infested every corner of universities, from the classroom to the administration building. And emboldened, they operate according to their own resistance rulebook.

At least 20 Yale University professors shut down classes last week so that law students could protest Kavanaugh's hearing both in D.C. and on campus. Kavanaugh, by the way, is a graduate of Yale Law School.

At Harvard University on Monday, Associate Dean Catherine Claypool announced that Kavanaugh will no longer be teaching a course that he's taught in the past at the school. Claypool claims that Kavanaugh "can no longer commit to his course on the Supreme Court."

In other words, the mob got their way.

Given the shaky state of the accusations against Kavanaugh and the daily erosion of the credibility of the accusers, why are law schools, of all places, rushing to judgment against their own alumnus without any substantiating evidence or witnesses?

If they really wanted to teach their law students an important lesson, it might be this: Put your political prejudice aside. Exercise a bit of restraint. And withhold judgment until all the evidence and the facts are in.

Oh, and justice should still be blind, not political.

Adapted from Laura Ingraham's monologue on "The Ingraham Angle," Oct.2, 2018