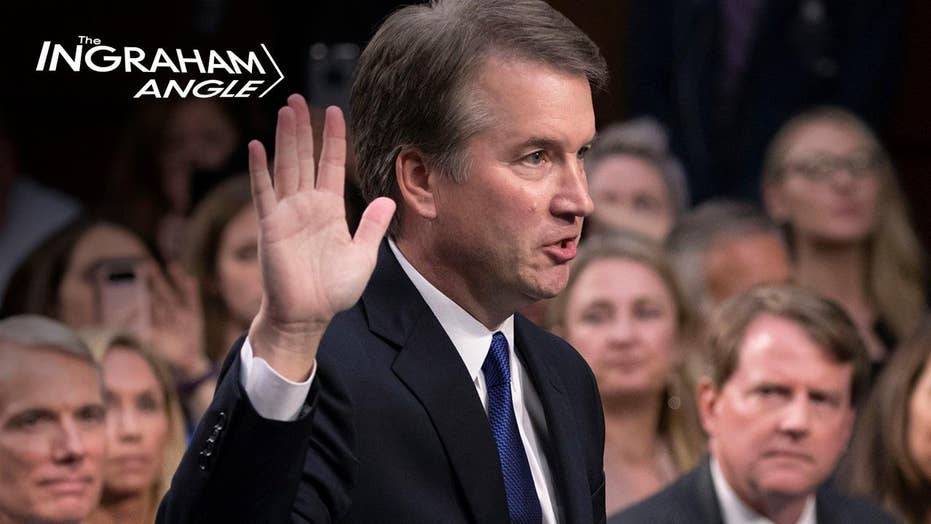 On Monday, Laura Ingraham reacts to the accuser of Supreme Court nominee Brett Kavanaugh coming forward. Then, Laura exposes the Democrats’ hypocrisy on the accusations of Kavanaugh. Plus, coverage on President Trump declassifying Russia investigation documents.

By now, most of you are familiar with the eleventh hour charges against Supreme Court nominee Brett Kavanaugh. Christine Blasey Ford, a Palo Alto research psychologist is claiming that when she was 15 and Kavanaugh was 17, he made unwanted advances to her at a boozy house party. She claims that he tried to force himself upon her.

Kavanaugh released a statement today emphatically denying the charges for a second time, saying "This is a completely false allegation. I have never done anything like what the accuser describes -- to her or to anyone." But the 10 Democrats on the judiciary committee were unanimous in their calls to delay Kavanaugh's scheduled Thursday vote. And some weak-kneed Republicans, no shock there, like Flake and Corker, joined those calls.

But there are holes in Ms. Ford's version of events. The 2012 notes from her psychotherapist mentioned four men involved in the assault on Ford.

Now, the accuser says it was only two men. Nowhere does Kavanaugh's name appear in those notes. And both Kavanaugh and the only other witness deny that the event ever occurred.

Ford claims that she decided to come forward at this moment out of "civic responsibility." But the timing, suffice it to say, is curious. Senator Dianne Feinstein had a letter from Ford detailing these allegations back in July. But she chose not to share it with the FBI or to raise it in 32 hours of public hearings, and of course, one hour of a private meeting with Kavanaugh. So why?

Well, this all has the whiff of a political smear masquerading as a sexual assault allegation, one that 36 years later, let's face it, cannot either be proven or disproven. It is impossible to prove a negative and questioning Ms. Ford and Brett Kavanaugh on this matter, it is unlikely to reveal anything new.

But, still, this afternoon, judiciary committee chairman Chuck Grassley announced that he's calling a hearing a week from today, giving both Kavanaugh and Ms. Ford an opportunity to be heard.

But think about this for a moment. To furnish Democrats with another big top for their divisive circus may actually be a mistake for Republicans.

Democrats have been salivating for another Clarence Thomas-Anita Hill like spectacle to use as leverage against Republicans in the fall and maybe get some more female voters while they're at it. Here is minority leader Chuck Schumer:

"I think the allegations of Professor Ford are extremely credible. She took a lie detector test.

She talked to [about] this to her therapist because they were having family counseling in part because of what happened to her five years ago and told all the details.

And third, to come out and say something like this puts you and your family through incredible scrutiny, people throw brick bats at you and everything else. She didn't do it on a whim. I don't think she did it for political reasons so she has a great deal of credibility.

No one knows anything about this yet apparently. She hasn't testified, but Chuck Schumer is supremely confident.

But the very idea that Schumer or anyone else who is going to be able to get to the bottom of a 36-year-old allegation is ludicrous. And Chuck, as you know, lie detectors aren't admissible in court for a reason.

Lindsey Graham made a point, by the way earlier today. He said, "It is a little odd that she even decided to take a lie detector test, but she wanted to remain anonymous."

Well, the fact is, there is no way to ensure that Brett Kavanaugh will receive due process here because allegations such as this, they should have been examined in any of the six FBI background checks that Kavanaugh underwent.

But instead, this was dropped less than a week before his committee vote.

And as such, a lot of reasonable people can conclude that this is all part of a political hit job, a well orchestrated, Alinsky-ite maneuver timed to cause maximum damage to Kavanaugh, to President Trump and the midterms for the Republicans. -- Put maximum political pressure on the Republicans especially when you have people like Corker and Flake. They are not running for re-election, what are they supposed to do?

Anita Hill this weekend dropped a statement designed to insulate the accuser from any criticism, frankly, any meaningful questioning. And box in any male Republican questioning Ford in an open forum.

She wrote the following, "Given the seriousness of these allegations, the government needs to find a fair and neutral way for complaints to be investigated.  I've seen firsthand what happens when such a process is weaponized against an accuser and no one should have to endure that again."

Christine Ford's attorney, Debra Katz, echoed Anita Hill's thoughts and claims that her client is willing to appear before the Judiciary Committee.

DEBRA KATZ, ATTORNEY FOR CHRISTINE BLASEY FORD:  She's willing to cooperate. What she is not willing to do is to be part of this blood-letting that happens in Washington. We only need to look at the Anita Hill hearings to know what that's going to look like and that is not a fair way to get at the truth.

Think about this, fair? What is a fair way?

So, anyone has the freedom, a male or a female, has freedom to drop damaging allegations just days before a confirmation vote, when someone has been in public service for years and years and years, undergoing six background checks. And then outside the normal procedures, they can drop a letter anonymously, have it leak out a few weeks later and they don't get any criticism?

And Republicans who buckle to this type of smear and the type of frankly intimidation game, they don't deserve to be in the Senate for another minute. Any senator who would allow this to happen to a nominee of Kavanaugh's experience and integrity, should look at his or her own.

I've had the great privilege of knowing Kavanaugh for 25 years. I've known him socially and in professional circles. And I've known a lot of people in this town -- in both parties. But few -- I can probably count them on two hands -- with his character, his intellect and his professionalism.

I don't say this because he is someone I support for the court, I say this because I know him. And if this can happen to him, I tremble for this country and this process and for any man or woman, who find themselves up for a big job, who didn't spend his or her teenage years in a convent or a monastery.