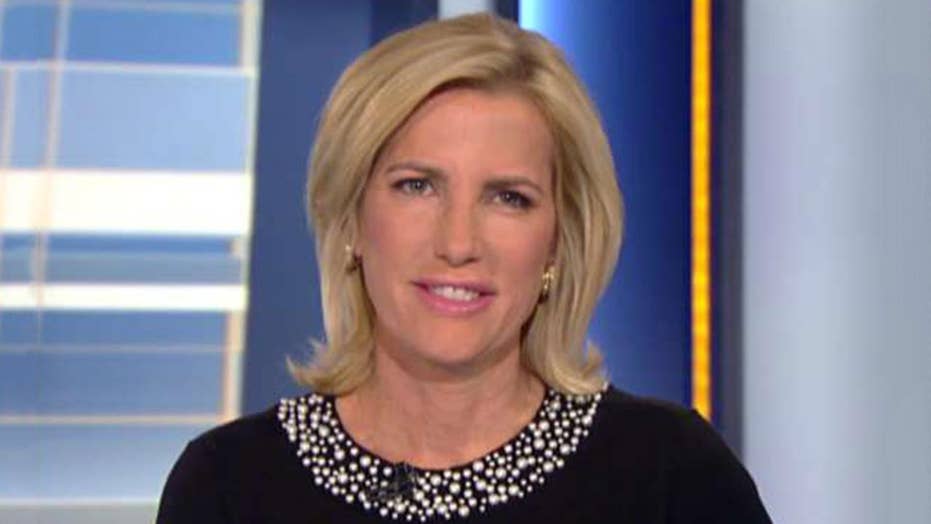 Laura investigates comments made by Sen. Mazie Hirono and other top Democrats.

Now, despite the big gains in the House and the midterms, Democrats still may not get it. They have a new line. They've been testing it out. All right, ready for this? They are now the smartest people in the room who have all the answers, even if you are too stupid to understand it. Here’s how Hawaii Senator Mazie Hirono explains it:

“One of the things that we Democrats have a really hard time [with] is connecting to people's hearts instead of here. We are really good at shoving out all the information that touches people here but not here. We Democrats know so much -- that is true. We have the kind of tell everybody how smart we are, and so we have a tendency to be very left brain.”

Now, unless you think this is some isolated idea, all right --  “that we are just so smart that we have trouble connecting with you” -- It's actually something that is shared fairly widely and by two of the latest forebearers, by the way, of the Democratic Party.

Here’s Hillary Clinton: “Do you really think Donald Trump has the temperament to be commander-in-chief? Imagine him in the Oval Office facing a real crisis.

And here’s Barack Obama: “He just says, I'm going to negotiate a better deal. What magic wand do you have? And usually, the answer is, he doesn't have an answer.

This office has a way of waking you up. His positions or predispositions that don't match up with reality, he will find shaken up pretty quick.”

OK. The obvious implication being that Donald Trump and those Americans who voted for him are just a bunch of dumb (inaudible).

Now let's face it when Trump won in 2016 -- you can see Obama there, still shell-shocked back in November of 2016 -- well, he embarrassed. -- Trump embarrassed a lot of the so-called experts.

The consultants, the pollsters, the strategists, all the big thinkers, and the establishment class. So feeling suddenly diminished, they lashed out at Trump, belittling his intelligence.

Here’s just a sample of the kinds of things that have been said on other news channels:

“The problem here is that the president doesn't read. We know that.”

“Isn't it remarkable how little confidence Donald Trump's own lawyers have in him? That they think he is too stupid to sit across the table with Robert Mueller?”

Mika Brzezinski, MSNBC host:  "...almost caveman-like. It really is. He is like Fred Flintstone running the country."

“It's man without curiosity. It's a man who doesn't read, and it's a man with an attention span of a rabid Tsetse fly”

OK, that is going back to Mark Shields. Well, they said similar things by the way about Reagan, until he died, of course, and then they all pretended that they never said any of the mean stuff they said about himfor his two terms in office.

Liberals claim to be for the little guy. They are the champions of the average person. But they are really elitist snobs at heart. Maureen Dowd, a New York Times columnist, used to write these pieces mocking the cultural and culinary tastes of Bush 41 and Barbara. You know, he ate pork rinds and the two of them watched things like "America's Funniest Home Videos" on TV. on Sunday nights.

The subtext was always, look at the Bushes, Ivy League blue bloods but still unsophisticated, and frankly, not all that smart. But here's a news flash for everybody. No one who becomes president is dumb. Especially not Trump, who managed to beat not one, but two political dynasties to win the White House. Remember all the dire predictions made by all those political and business savants about a Trump presidency?

Here’s some of what we heard from pundits:

“If the unlikely event happens and Trump wins, you will see a market crash of historic proportions.”  …

“In the event Donald wins, I have no doubt in my mind, the market tanks.” …

“Donald Trump is moving us toward World War III.”

“The lack of a diplomatic and serious engagement strategy, in my view, has us sliding toward war by next summer.”

We can just play this all night long. We sort of have a show because that is really entertaining. Democrats and their allies imply that they have a monopoly on intelligence and brainpower. But if that's true, why have they screwed things up so badly when they have the chance to fix them?

While Trump identified the threat, for instance, posed by China and has challenged them, who can forget Bill Clinton pushing for China's acceptance on the world stage with his misguided WTO push? Remember this statement?

Disagreement is a good deal for America. Our products will gain better access to China's market. If China gains no new market access to the United States, we will gain tough new safeguards against surges of imports and maintain the strongest possible rules against dumping products that have hurt Americans in the past.

Oh, my gosh. Rhodes scholar, Yale undergrad, Yale Law School, and like many others, he didn't see the obvious coming.

China has manipulated and distorted world markets, engaged in the blatant ransacking of our intellectual properties, and dumped heavily subsidize products into the United States, leading to the loss of millions of U.S. jobs.

The CEO of Minnesota's Cambria, it makes quartz countertops, told us earlier this week how China targets U.S. manufacturers for the sole purpose of destroying them, and then, dominating the market:

“They are subsidized by their government. The People's Republic of China is not a friendly participant in a free enterprise economy in America. They subsidize their companies, they run their banks, they are state-owned and they are going after American manufacturing.”

But no worries because Democrats have all the answers. Now, remember President Obama assuring us, by the way, that his cabinet would be staffed with the best and the brightest?

Here’s this memorable statement from Kathleen Sebelius, the former Secretary of Health and Human Services as the rollout of ObamaCare was faltering:

Nobody says the site is working the way we want it to. Certainly, the president acknowledges like yesterday, no one could be more frustrated  than I am, and the president, that this isn't smooth.”

Who can forget the Obama administration's foreign policy flops? Again, these are the smart people, remember.

Mazie Hirono said we are too smart for our own good. Remember when he designated the Muslim Brotherhood as moderate Islamist in Egypt and he called Iran's president Rouhani a moderate reformer?

“We are encouraged that President Rouhani received from the Iranian people a mandate to pursue a more moderate course. Iran's genuine commitment to go down to a different course will be good for the region in the world.”

It's been awesome so far. And how about all the geopolitical geniuses that Hillary's State Department, allowing our ambassador to travel to Benghazi when we knew about repeated security threats and an unstable situation on the ground? He and three others ended up dead.

Trump removed the rose-colored glasses and what he did is he confronted the rogue powers in the region as they exist.

Trump's foreign policy is more pragmatic and prudent. He doesn't believe in nation-building, nor does he believe passivity is the answer in the face of real threats. But the Democrats, they feel like, come on, they have the wind at their backs now. Forget all the stuff that happened, all their predictions that came out -- no, they didn't come out to be true at all.

But they feel like they have a head of steam, and maybe you can kind of understand it. They picked up 40 seats in the House. But right now, what I'm seeing, is that there is very little evidence that they have learned much about America.

Why Americans voted in the first place for Donald Trump, and why they still support so many of his policies, especially on trade and immigration.

And for all the Democrats star power, they couldn't win the big races in Florida, Texas, or Georgia. Why not?

I'll tell you why, in part, because they have not come to terms with the fact that their decades of errors paved the way for Donald Trump.

But I'll tell you this, at least Senator Claire McCaskill, of course, she lost her re-election bid, she seemed to have learned something, telling NPR, "I don't think my vote against Kavanaugh hurt me as much as the spectacle that occurred. There were mistakes made by my party in terms of how that was handled." Well, I'll say.

The bright lights of the Democratic Party, though, they thought that the American people would rally behind them. And they set about to destroy the life of a man who actually is brilliant and one of the finest judges in America.

Well, instead, most fair-minded people, maybe they didn't go to Yale Law School. They saw the campaign of the Democrats, the campaign of personal destruction, for what it was. Insidious.

I don't know what the next two years are going to bring. But before you sweat the warnings of the expert class, remember just how much they screwed up over the past 30 years or so.

Adapted from Laura Ingraham's monologue on "The Ingraham Angle," on  December 5, 2018.