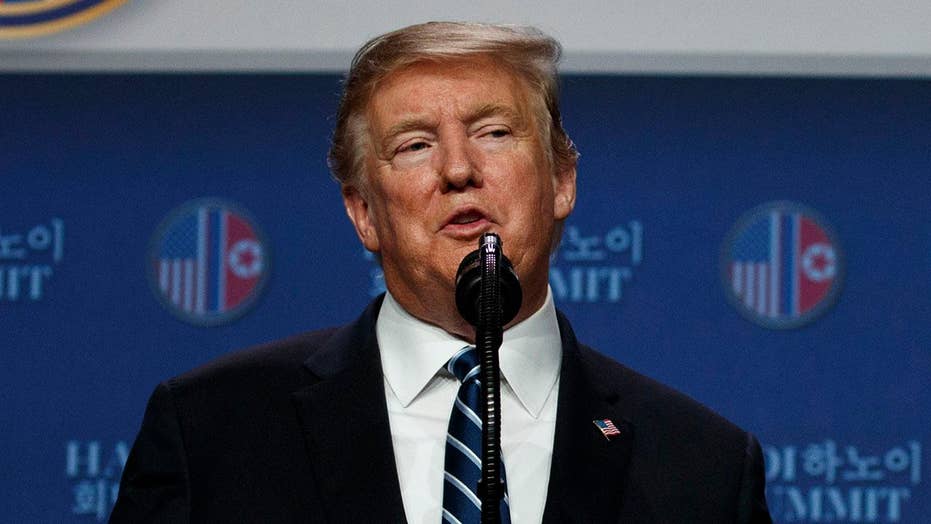 Expert: President Trump did the right thing by walking away from the negotiating table with North Korea

Harry Kazianis, director of Korea studies at the Center for National Interest, predicts a third summit with Kim Jong Un.

Although there was no agreement reached between President Trump and North Korean dictator Kim Jong Un at their summit in Vietnam on denuclearization by the North, we shouldn’t write off the possibility of an agreement in the future.

One reason for this is that Kim may not even need a nuclear deterrent any more. He’s got a stunning weapon that’s not even on the negotiating table: cyber, and an army of 6,000 hackers supported by China.

North Korea set up its first cyberunit in 1998. Back then, they weren’t that good; U.S. military officials scoffed that North Korea was the only country without a laptop.

TRUMP WASN'T PREPARED TO LIFT US SANCTIONS ON NORTH KOREA LEADING TO SUMMIT'S ABRUPT END: 'SOMETIMES YOU HAVE TO WALK'

But that started to change in 2009 when North Korea launched 77 denial-of-service attacks on South Korean and U.S. government sites. Kim Jong Un came to power in 2011 and upgraded cyber programs, just like he did with missile tests and nuclear blasts.

Now, North Korea’s hackers specialize in malware and electronic currency theft. Their military units are also configured for attacks on power plants and other networked infrastructure.

That was just a preview. In 2016, North Korea stole $81 million from Bangladesh Bank. It was the largest cybertheft ever, according to the FBI. And they kept going. By 2018, the FBI found North Korea’s attempted heists totaled close to $1 billion. (Note: The FBI caught the hacker using the same 23-character password in multiple break-ins with just one number switched.)

In 2017, the WannaCry 2.0 ransomware attacks paralyzed hospitals in Britain and hit the Central District Court system in California. The first wave held crucial network files hostage until managers sent money to restore access. Over 100 countries were affected. The third and most evil version of WannaCry was a worm that spread itself and simply encrypted files, with no recourse. The FBI indicted a North Korean hacker for all the attacks.

To be clear, this is state-sponsored cyberterrorism. The North Korean hacking squad numbers at least 6,000 people in six different divisions focused on state infrastructure, banks and defense technology, according to a Voice of America report.

Last fall the FBI rolled it all up in a 179-page indictment. The scale and scope of North Korea’s cybercrimes “is staggering and offensive to all who respect the rule of law and the cyber norms accepted by responsible nations,” said John Demers, assistant attorney general for national security.

You could dismiss all that hacking and highway robbery. But hear from Sue Gordon, principal deputy director of national intelligence: “North Korea poses a significant threat not just because of its emergent nuclear capability and missile arsenal, but its stunning capability in cyber,” she said at a recent symposium.

The progress in cyber may have to be dealt with another day. For now, it strengthens the case for denuclearization. De-nuking is a fantastic business opportunity for North Korea.

Make no mistake, North Korea remains a nasty problem. It’s terrible how far Kim Jong Un developed cyber after he took over in 2011. And China has helped significantly.

With cyber in his back pocket, perhaps Kim Jong Un will be ready at some future point to take big steps toward denuclearization.