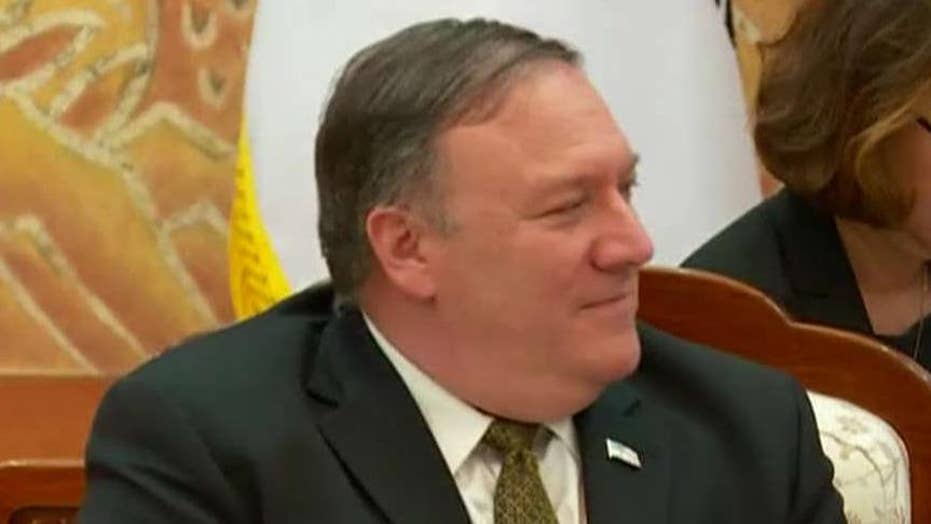 Pompeo's visit comes amid increasing tensions between the U.S. and Iran.

Secretary of State Mike Pompeo cancelled a scheduled visit with German Chancellor Angela Merkel on Tuesday to make an unplanned stopover in Baghdad, where he delivered a dramatic message to the Iraqi government about the need to protect Americans on Iraqi soil.

It’s rare for the U.S. government to cite recent intelligence information, but in this case the intelligence appears to have been so specific and the threats so imminent that our senior most national security officials felt confident in tipping their hand to the Iranians.

Because they knew that the Iranians already suspected the worst.

On April 19, a respected Iranian internet news agency reported that Iran’s Supreme Leader had just fired the intelligence chief of the Islamic Revolutionary Guards Corps (IRGC) after “classified documents and information leaked to Israel and the U.S. regarding Iran’s nuclear program and secret missile bases.”

The fired intelligence chief, Brig. Gen. Ali Nasiri, was said to have taken refuge in a U.S. embassy or consulate in a nearby Persian Gulf state, where he turned over sensitive documents and intelligence information to the Americans.

Nasiri is arguably the highest-ranking IRGC official ever to have defected to the West or Israel. As intelligence chief, he had access to the darkest secrets of Iran’s nuclear weapons development program. He knows where the long-rumored secret uranium enrichment facilities were located, because his men were in charge of guarding them.

He may also know the whereabouts of former FBI Agent Bob Levinson, who was kidnapped by the IRGC while visiting Kish island on March 9, 2007 and is long-rumored to be held in a secret IRGC prison in Iran or possibly Afghanistan.

Just days after Nasiri’s defection became public, Iranian foreign minister Mohammad Javad-Zarif traveled to the United States and announced that he had been instructed by the regime to negotiate a “prisoner swap” with the United States, exchanging the four known Americans held in Iran for Iranians jailed in the United States for violating U.S. export control laws.

Nasiri also knows about covert IRGC networks in Iraq, and about Quds Force operational plans to target U.S. persons and facilities in Iraq and the Persian Gulf more generally.

However, the United States has a checkered track record of exploiting intelligence from Iranian defectors.

In early 2007, an activist affiliated with my organization, the Foundation for Democracy in Iran, played a role in helping Brig. Gen. Alireza Asgari defect from Turkey to the United States.

Asgari had helped set up Iran’s military and intelligence networks in Lebanon during the 1980s and retired as a deputy defense minister, where he had access to many of Iran’s nuclear secrets.

By all accounts, Asgari was the source of dramatic new information about Iran’s nuclear program that the CIA claimed compelled it to make last-minute alterations on a December 2007 National Intelligence Estimate (NIE) on Iran.

The NIE asserted that based on the defector’s information, the CIA now believed that Iran had shut down key parts of its nuclear weapons program in 2003. But that is not what Asgari actually told the CIA.

Asgari’s information, which was immediately classified by the CIA, was kept so close hold that even staffers on the House Permanent Select Intelligence Committee at the time were not allowed access to it.

That lack of access prompted them to write a counter-report, pointing to many failures in the NIE assessment that Iran had shuttered its nuclear weapons program.

But we know what Asgari actually told the CIA from two sources: first, from the Iranian activist who helped him to defect in 2007, who I remained in close contact with; second from another Iranian defector, Hamid Reza Zakeri, who was told by a handler in the French intelligence service that Asgari’s information was so sensitive it had been personally briefed to then-President Nicolas Sarkozy, prompting him to call for enhanced United Nations sanctions on Iran.

National Security Adviser John Bolton has a long history of dealing with intelligence reports that have been falsified or skewed by politically-motivated analysts.

His confirmation as U.S. ambassador to the United Nations was derailed in 2006 because of his skepticism of State Department intelligence analysts who downplayed other U.S. intelligence relating to Cuba’s biological weapons development.

Thankfully, with Bolton at the White House and Pompeo at the State Department, the Trump administration has been able to capitalize on in-time intelligence threat reporting from this latest defector from Iran.

Their approach undoubtedly has saved U.S. lives in Iraq and perhaps elsewhere in the region.