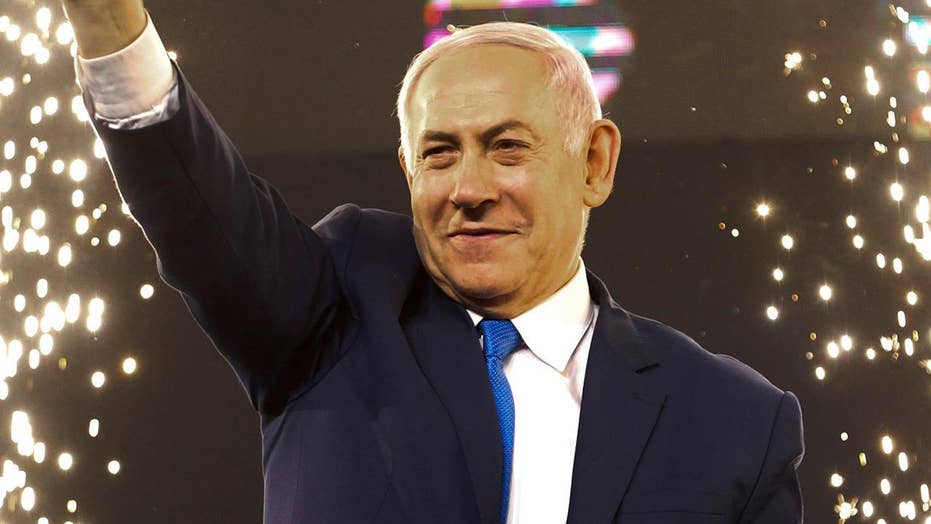 Netanyahu is headed toward his 5th term in office with nearly all the votes counted; Trey Yingst reports.

Israeli media report that Netanyahu’s Likud Party will be able to put together a coalition government with conservative and Orthodox Jewish parties that will hold 65 seats in the Knesset, the 120-member Israeli parliament.

With almost all votes counted it appears that Likud and the Blue and White Alliance (named for the colors of the Israeli flag) will each control 35 seats in the Knesset. But four right-wing and religious parties pledged support for Likud, while another party was expected to join a coalition with Likud as well, cementing Netanyahu’s majority.

A LOOK AT THE WINNERS AND LOSERS IN ISRAEL'S ELECTION

President Trump, who didn’t officially endorse Netanyahu but whose strong support of Israel boosted Netanyahu’s popularity, told reporters at the White House Wednesday: "Everybody said you can't have peace in the Middle East with Israel and the Palestinians. I think we have a chance. I think we have now a better chance with Bibi having won."

Trump’s actions strengthening Netanyahu’s position included: moving the U.S. embassy in Israel from Tel Aviv to Jerusalem; withdrawing from the Iran nuclear deal; recognizing Israel’s annexation of the Golan Heights that were captured from Syria in 1967; and branding Iran’s Revolutionary Guard Corps a “foreign terrorist organization.”

The Trump-Netanyahu relationship was far better than Netanyahu’s relationship with President Obama, who frequently criticized Israeli actions under Netanyahu and sought to strengthen U.S. ties with Palestinians.

Netanyahu welcomed “a night of great victory” once election results confirmed his Likud party had gained seats in the Knesset. He promised to form a new government “swiftly” with his conservative coalition partners.

The past 25 years in Israel have been the Netanyahu years. You can tell how much Israel has changed by looking at those opposing the prime minister in the election.

In earlier years, Netanyahu was challenged on the left by a “pro-peace” Labor Party. Indeed, President Clinton weighed in heavily in support of the Labor Party to defeat Netanyahu twice after the Oslo Peace Accords were reached with the Palestine Liberation Organization.

But since the second intifada (Arabic for “uprising”) erupted in 2000 and Palestinians turned to suicide bombings, rocket attacks and other actions to strike Israeli civilians, the mood in Israel has shifted dramatically to the right.

The Israeli government under then-Prime Minister Ariel Sharon started to build a wall to keep out the terrorists from the West Bank. Sharon was widely criticized for it at the time, including by the administration of President George W. Bush, because the wall cut through some Palestinian neighborhoods.

The Trump-Netanyahu relationship was far better than Netanyahu’s relationship with President Obama, who frequently criticized Israeli actions under Netanyahu and sought to strengthen U.S. ties with Palestinians.

Israelis called it the “Oslo Fence,” noting that it only became necessary after the Oslo Peace accords brought armed terrorists to their doorsteps. Israelis have also built walls along the northern border with Lebanon and the southwest border with Gaza.

Few Israelis still retain any illusions about the possibilities of a negotiated peace agreement with the Palestinians. With Palestinian Authority President Mahmoud Abbas – the most “moderate” of Palestinian leaders – vowing to never recognize the state of Israel, there simply is no partner for peace.

And so in Tuesday’s election, Netanyahu’s main opponents were three former Israeli Defense Forces chiefs of staff, who criticized him for being too soft on the Palestinians – not too hardline. They wanted him to launch a full-scale invasion of Gaza last November when Hamas and Iranian-backed militias stepped up rocket attacks into Israel.

Netanyahu argued, to the surprise of many, that he had received “secret intelligence” that convinced him to respond more cautiously, causing then-Defense Minister Avigdor Lieberman to resign in protest.

I believe that intelligence focused on Iran’s troop and missile infrastructure buildup inside Syria, and Iran’s repeated vows to open a “land bridge” from Iran through Iraq into Syria that would allow Iran to send massive numbers of ground troops and equipment right up to the Israeli border unhindered.

The Islamic State of Iran has long boasted that it will “eradicate” the state of Israel and “annihilate Tel Aviv” if Israel attacks; nothing new, for sure. But Iran has patiently built up new capabilities to make those threats much more convincing.

Iran today can open a three-front war against the Jewish state using proxy forces in Gaza, Lebanon and Syria. This is a proven capability, not an idle threat. So far, Netanyahu has kept all three at bay.

In December 2017, for example, a senior Iranian-backed militia leader from Iraq posed for selfies on the Golan Heights peering down into the Galilee in northern Israel after he drove in a small convoy across the newly opened “land bridge” from Iraq.

The Iranians today command an estimated 80,000 militiamen in Syria from Lebanon, Iraq, Pakistan and Afghanistan. Iranian Revolutionary Guards Corps commanders have said that the “land bridge” will allow them to flow in another 100,000 troops to Israel’s borders, clearly the prelude to war.

And this is why Israel, under Netanyahu’s cautious leadership, has been relentlessly striking at Iranian military and intelligence bases in Syria over the past two years, pushing the Iranians as much as 80 kilometers from Israel’s northern border.

Netanyahu has shown himself to be a consummate diplomat, regularly flying to Moscow to meet with President Vladimir Putin to win Russian acquiescence to the Israeli air strikes.

Netanyahu’s calm behavior contrasts starkly with the hot-headed remarks of opposition candidate Ganz, the most gaffe-prone of the three former Israeli military chiefs. Ganz has called for annihilating not the Iranian threat but the Palestinian one, boasting in campaign ads of having sent parts of Gaza “back to the stone age” when he was chief of staff during the 2014 war.

Many Israelis may be fed up with Netanyahu the politician. They may be tired of the corruption allegations swirling around him – allegations he denies.

But Israelis increasingly appreciate Netanyahu’s steady hand on the tiller, and his ability to avoid war without appeasing Israel’s enemies. That alone is worth awarding him another term.