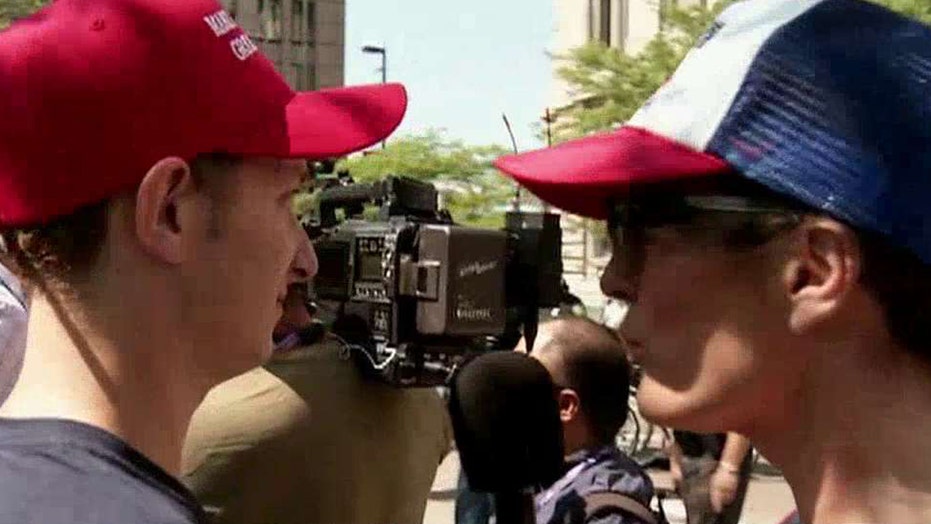 Kennedy catches up with protesters in Cleveland

Protests and vocal democracy are alive and well at the RNC. I headed into the scrum in Cleveland’s Public Square as several political factions squared off to call each other racist. There were the Bible Believers, the Revolutionary Communist Party, Black Lives Matter activists and a pod of random anarchists who appeared to have floated in from Santa Barbara.

I immediately stumbled upon a middle-aged white man with a plump head who was surrounded by Indiana State Troopers.

Who was this portly lightning rod? Was it Sheriff Joe, who was confronted by Code Pink protestresses the day before and was similarly shuttled into a gassed-up getaway car? Nope. It was Alex Jones, the mercurial Truther, who had worked the crowd into a lather. One of the protesters told me Jones had been punched in the face, and he wished he’d been the one who punched him.

There were people screaming about racist cops, such as Hasheem, a Black Lives Matterer who seemed passionate yet disheveled for one reason or another. I tried to talk to a few more BLMers, but despite their public cries and banner waving they shied away from my camera and mic.

On this day, the anarchists had their shirts or pulled over their faces, and they also mostly refused to talk on camera. And they all smelled. Bad. Like hobo-in-a-port-o-potty bad. Don’t they have moms? And laundry mats? And working olfactory bulbs?

As the Bible Believers (or Believing Biblers, I didn’t get their card), salvation banners and bullhorn in hand, made their way to the makeshift stage, the Black Lives-ers started calling them racist and suggested the eager Christians do very untoward (and unrepeatable) things to themselves. The Bible folk shouted back and asked if black lives in the womb matter, to which the other half of the crowd yelled more uncomfortable suggestions for things one might do only in the safe confines of a trusting marriage, and certainly not to oneself in a public square.

The anarchists have been a ubiquitous protest presence since the WTO riots in Seattle in 1999, which I witnessed as a talk radio host in the Emerald City. They clump together in black-clad bands; they usually have black bandanas and poor dental hygiene (swollen gums, cracked teeth, putrid breath – why is that??); and they love drama and group rabble-rousery. On this day, the anarchists had their shirts or pulled over their faces, and they also mostly refused to talk on camera. And they all smelled. Bad. Like hobo-in-a-port-o-potty bad. Don’t they have moms? And laundry mats? And working olfactory bulbs?

These gallivanting attention whores claim to hate media amplification, but if they so hate the limelight, why are they jiggery-pokering all over heck and back to get all eyeballs trained on them? Why not become nocturnal exterminators or lonely mountaintop astronomers?

Because they have no drive, discernible talent or even a common political aim, other than not bathing and standing around pretending to be important to eye-rolling cops who would probably choose to do anything over slapping zip-tie cuffs on lazy, unwashed hysterics whose collective smell singes unsuspecting nostril hairs.

The Westboro Baptists finally showed up. No one likes them. Not Black Lives Matter-ers, stinky anarchists, outdated communists, Bible Believers, cops, Christians, rationalists, military sympathizers … No one. I think they hate themselves! They stood on stage and chanted “God Hates Fags,” which in this day and age — with all the instability, terrorism, strained race relations, so-so economy and political absurdity — is the dumbest, most asinine thing you can possibly chant in a life-and-death climate that’s ripping apart with every passing tragedy. No wonder everyone hates them. They put the “bore” in Westboro!

All in all, everyone was looking for something that never quite materialized. I celebrate political protest, it is necessary and protected for a reason, but make it good people! I didn’t see any arrests, there were no shots fired, no mob clashes … just a bunch of falsely modest idiots who all need to take a breath and a shower.

"Kennedy" is the host of the primetime program "Kennedy," which airs Monday through Thursday at 8PM/ET on the Fox Business Network. Follow her on Twitter @KennedyNation.