Round one of questions for Supreme Court nominee Brett Kavanaugh at his Senate confirmation hearing; Shannon Bream, chief legal correspondent and anchor of 'Fox News @ Night,' reports from Capitol Hill.

In 1954, Sen. Joseph McCarthy, R-Wis., was embroiled in a dispute with the Army. During a televised Senate hearing McCarthy falsely accused an Army lawyer involved in the case of having ties to a communist organization.

In a pivotal rejoinder, lawyer Joseph Welch, representing the Army, told McCarthy: "Until this moment, senator, I think I never really gauged your cruelty or your recklessness. … Let us not assassinate this lad further, senator. You have done enough. Have you no sense of decency?"

Welch died in 1960, but if he were around today he could level the same question at Senate Democrats who have spent two days relentlessly attacking Judge Brett Kavanaugh at his confirmation hearing for the positon of associate justice on the Supreme Court.

Kavanaugh is a brilliant jurist and a man of the highest integrity – but Democrats on the Senate Judiciary Committee and protesters who kept interrupting Kavanaugh’s confirmation hearing for a second day Wednesday are engaging in nonstop character assassination of this highly qualified member of the U.S. Circuit Court of Appeals for the District of Columbia.

Democrats know they lack the votes to stop the full Senate from confirming Kavanaugh, who was nominated by President Trump to join the nation’s highest court. Those on the Judiciary Committee had their minds made up to vote against Kavanaugh before his four-day confirmation hearing even began Tuesday.

Instead of making serious inquiries to decide how to cast their votes on Kavanaugh’s nomination, Democratic committee members are using the judge’s confirmation hearing to grandstand before a national TV audience. They want to satisfy their most radical supporters by throwing non-stop insults at Kavanaugh, as if he an accused criminal in a show trial where the verdict was determined in advance. 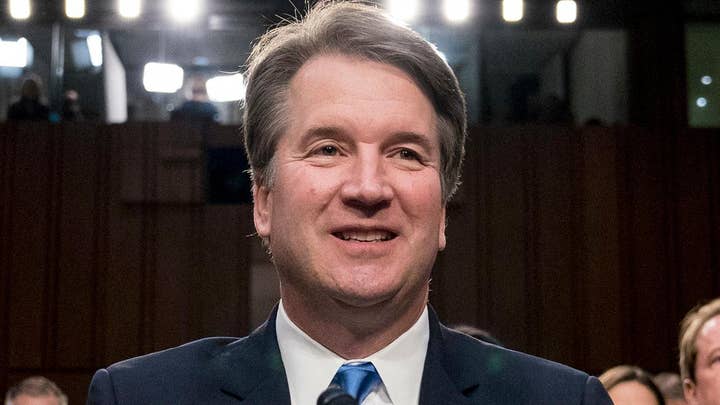 Democratic Sens. Cory Booker of New Jersey and Kamala Harris of California apparently have another reason to attack Kavanaugh. They sent out political fundraising appeals almost immediately after their attacks on the judge at the hearing. Both senators are considering running for president in 2020.

The left’s hysteria was also reflected in the repulsive attacks on social media against Zina Bash, a former White House staffer and Kavanaugh clerk who was sitting behind Kavanaugh at the hearing. Bash, whose grandparents were Holocaust survivors, was falsely and maliciously accused of being a Nazi and making a “white power” symbol simply because of the way she had her arms crossed and the position of her fingers.

But despite two days of pummeling by partisan Democrats, Kavanaugh showed Wednesday he was not going to be their punching bag. He more than held his own in responding to hostile questions and long-winded attacks from Democratic senators.

At the hearing Wednesday, members of the Judiciary Committee finally got down to discussions about the law, even as screaming protestors once again disrupted the proceedings all day. One after another, they were pulled out of the hearing room by Capitol Police.

Senate Majority Leader Mitch McConnell. R-Ky., chastised the Democratic senators on the committee, saying that their behavior confirmed two things: that “their minds are already made up” and that “they’ll try anything to stop” the nomination. He castigated them for treating Kavanaugh “rudely” and for “insulting the patriotism of this devoted public servant and highly esteemed judge.”

Joseph Welch couldn’t have said it any better.

The second day of Kavanaugh’s confirmation hearing covered numerous issues. These included the claim made by some senators that Kavanaugh had misled the Judiciary Committee in 2006 when he said he had no involvement in the legal memos prepared by Justice Department lawyers about the enhanced interrogation methods and detention policies used with captured terrorists.

In answer to a question by Sen. Patrick Leahy, D-Vt., about this, Kavanaugh insisted that he had answered truthfully and that he “was not read into that program.” His previous answer was “100 percent accurate” and was “still accurate today.” Thus, Kavanaugh knocked out one of the false talking points being used against him.

Leahy then tried unsuccessfully to connect Kavanaugh to a 2003 incident when some Republican Judiciary Committee staffers accessed the computer files of Democratic staffers. At the time, such access was possible because the two parties shared a single computer system that lacked a security firewall.

But once again, Kavanaugh denied any knowledge or participation in this, saying that he “never knew” about the problem and that if he had “suspected something untoward,” he would have immediately notified White House Counsel Alberto Gonzales.

Leahy demonstrated how obsessed Democrats are with President Trump when he asked whether Kavanaugh thought President Trump has “an absolute right to pardon himself” or to “pardon somebody in exchange for a promise from that person that they wouldn’t testify against him.” Kavanaugh said he had not analyzed this issue and could not answer such a hypothetical question. That was a perfectly appropriate answer.

In an exchange with Sen. Orrin Hatch, R-Utah, Kavanaugh laid to rest Democratic claims that he would be a surrogate for Trump on the Supreme Court. Hatch asked Kavanaugh if he would “allow the president’s personal views on a case or personal interests to impact” his decisions. Kavanaugh answered that he is “an independent judge” who for 12 years has “been deciding cases based on the law and the precedent.”

In fact, Kavanaugh pointed out that he had written the 2012 opinion that overturned the terrorism conviction of Salim Ahmed Hamdan, a former driver and bodyguard for Al Qaeda terrorist leader Osama bin Laden. This was despite the fact that Kavanaugh had worked in the George W. Bush White House and this was “a signature prosecution” of the administration.

Sen. Diane Feinstein, D-Calif., not surprisingly focused on the issue that is the driving force of liberals today: abortion and the Roe v. Wade decision that legalized abortion nationwide in 1973.

Feinstein asked Kavanaugh whether he agrees that “a woman’s right to control her reproductive life impacts her ability to participate fully in the economic and social life of the nation.”

Kavanaugh gave the same answer as previous nominees, that the Roe decision is “entitled to respect under principles of stare decisis” – meaning that the issues is settled law.

Feinstein also tried to address another controversial area by asking Kavanaugh whether a president “has to respond to a subpoena from a court of law.” That was a clear reference to the possibility that President Trump could be subpoenaed to testify in the Russia probe being conducted by Special Counsel Robert Mueller.

Kavanaugh refused to answer that hypothetical question, although he did say that he thought the Supreme Court’s decision in U.S. v. Nixon was one of the “four greatest moments in Supreme Court history.” In that decision, a unanimous Supreme Court ordered President Richard Nixon to respond to a subpoena by turning over White House tapes and other documents in the Watergate scandal.

There were numerous other questions about a wide variety of legal issues, from the Chevron doctrine (a rule applying to the interpretation of regulations) to religious liberty and the separation of powers.

Kavanaugh provided informative answers that made it clear he is an experienced jurist with detailed knowledge of the law and numerous important court decisions.

Here’s the bottom line: Judge Brett Kavanaugh has the potential to be a great Supreme Court justice. He will judge cases based on evidence and the law, not preconceived political positions. But because he was nominated by President Trump – a Republican president many Senate Democrats despise – they would be opposed to anyone Trump nominated.

If I had the chance to speak directly to Democrats on the Senate Judiciary Committee I would slightly paraphrase Joseph Welch and say to them: Let us not assassinate this judge further, senators. You have done enough. Have you no sense of decency?