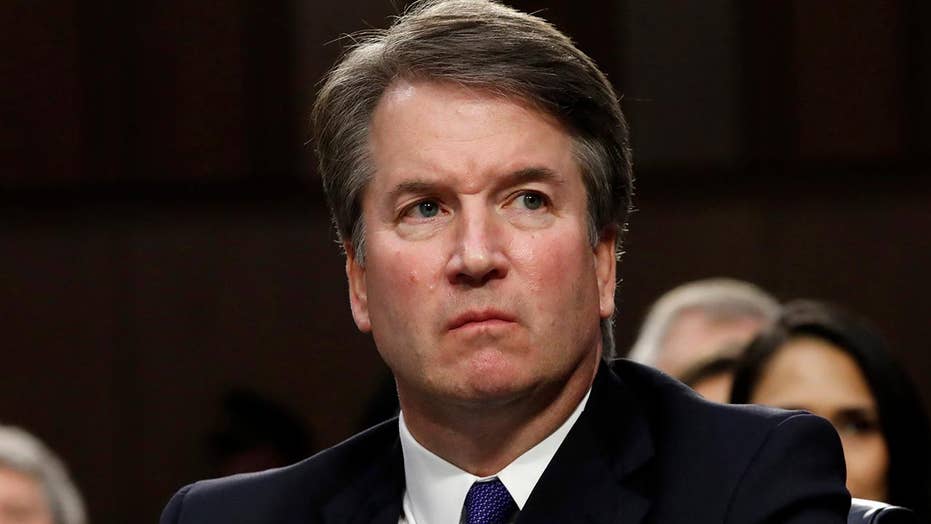 Judge Brett Kavanaugh’s confirmation hearing before the Senate Judiciary Committee on his nomination to the Supreme Court entered its second day Wednesday, after the unhinged left was on full display on the opening day Tuesday.

Partisan rancor reigned as outbursts, interruptions, protests, and juvenile political stunts broke out when opponents of the nomination attempted to highjack the day’s proceedings.

Each Trump-hating Democrat on the committee took his or her turn flaunting the left’s radical anti-freedom agenda, as the American people got a glimpse of what life would look like if Democrats were entrusted with control of government.

By contrast, Kavanaugh delivered an opening statement that emphasized he would judge cases fairly and without political influence.

“The Supreme Court must never be viewed as a partisan institution,” Kavanaugh added.

Halloween might not be until next month, but rest assured if Tuesday was any indicator, every scare tactic in the book will be employed this week by the frightening liberals.

Unsurprisingly, committee Democrats began their rigged obstruction charade by asking for delays and requesting more documents to review. As everyone knows, these tactics are illegitimate stunts, because the Democrats have already tipped their hands.

The Democrats on the committee are all going to vote against Kavanaugh’s confirmation, and in large part have already publicly stated as much. If there was a chance at changing minds and getting to “yes,” that might be a reason to look at more records from Kavanaugh’s esteemed career – but that’s a pipe dream.

The crazed left-wing base and the entrenched D.C. special interests driving this insanity won’t permit such open-mindedness. Judiciary Committee Chairman Chuck Grassley, R-Iowa, did a great job showing fairness but not giving in to the left’s overt acts of obstruction.

Reasonable American voters are keeping score. They will not forget this disgraceful sideshow any time soon, but career Democratic Party politicians and the purveyors of their far left ideology are too far gone to care what anyone thinks.

The truth is that President Trump made another outstanding pick for the Supreme Court. Kavanaugh is a supremely qualified jurist who will faithfully interpret the law and defend the Constitution.

Kavanaugh’s years of government service are open to the public and available for inspection by anyone who wishes to learn about his stellar record. Democrats have tried and failed to smear this fine man, but that won’t stop Sens. Cory Booker of New Jersey and Kamala Harris of California from further politicizing these hearings as an audition for the 2020 Democratic presidential nomination contest.

The Democratic machine’s playbook is as well-known as it is stale. Everyone knows what’s going to play out and it’s sad that the American people are going to have to stomach it yet again.

Committee Democrats are going to take turns attacking Kavanaugh for his principled decisions – and in the process highlight their failed agenda for the American people. So if there is an upside to this pathetic display by the liberals, their dangerous agenda will bubble up to the surface for all to take in.

This week Kavanaugh will be ridiculed for supporting the right to robust political speech that is enshrined in the First Amendment. Then his integrity will be questioned for standing tall for the right to keep and bear arms that is protected by the Second Amendment to the Constitution.

Following that, an assault on Kavanaugh will commence in order to grandstand the left’s unflinching addiction to abortion on demand. Soon after, committee Democrats will yell and scream about unchecked executive power and the rule of law, while advocating for President Obama’s unconstitutional DACA program for immigrants brought to America as children and lawless sanctuary cities.

But rest assured, the centerpiece of the Democratic agenda will not be forgotten. Judge Kavanaugh will be peppered with hypotheticals and relentlessly questioned about his views on presidential power and impeachment.

The Democrats will gladly take these hearings into the mud pit and the biased mainstream media will undoubtedly praise them for it.

But I know that Kavanaugh will answer each question honestly and with the wisdom, fortitude, and integrity of someone well-suited to be on the Supreme Court.  Kavanaugh deserves robust bipartisan support but the liberal machine is powerful and Senate Democrats are too weak to stand up to it.