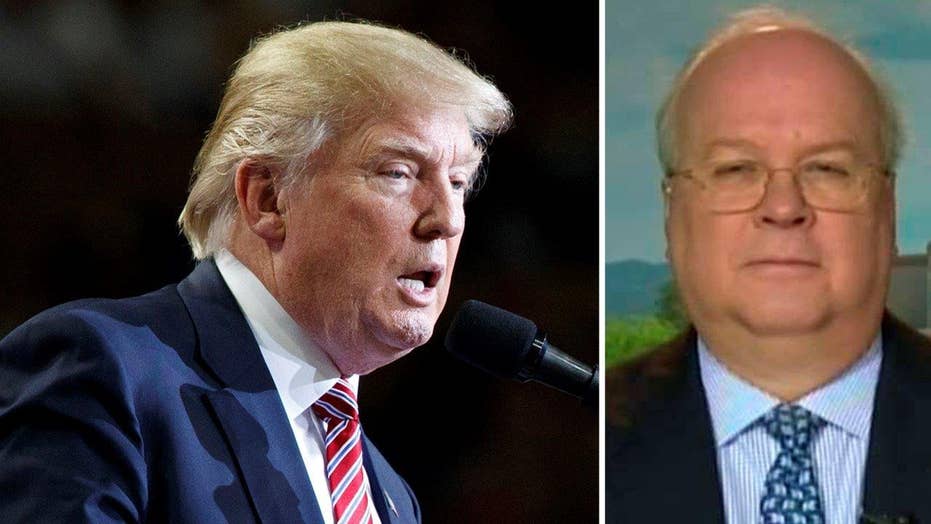 Karl Rove: Trump needs to stop preaching to the choir

Both Candidates Offered Muddled Messages: Trump began Monday with an economic speech in Detroit, delivered from a teleprompter.  Generally well received, he offered an outline of his jobs agenda and showed uncharacteristic poise when interrupted by protesters.

But the rest of the week was dominated by less useful issues, the result of his impromptu comments.  Tuesday, Trump forecast Clinton’s election would shift the balance on the Supreme Court saying, “If she gets to pick her judges, nothing you can do, folks.”  He paused, and then continued, “Although the Second Amendment people, maybe there is, I don’t know.”  His campaign dealt with the firestorm by explaining he was talking about gun rights supporters turning out to vote in record numbers to defeat Clinton.  But at best, his language was imprecise and at worst, reprehensible.

Then Wednesday, he told a Florida rally, “Look at the way they covered that story yesterday. Was that disgusting? The media is incredibly dishonest...almost as crooked as crooked Hillary Clinton.”  What swing voter is going to be won by that argument?  Surprise!  The press doesn’t favor the Republican presidential candidate.

At a Fort Lauderdale rally that same day, Trump accused President Obama and Clinton of “co-founding the Islamic State.”  By Friday, he backed down, saying he was being sarcastic. But sarcasm rarely travels well in campaigns. Trump would have been on strong ground had he said the Obama-Clinton decision to withdraw U.S. troops from Iraq created a vacuum that ISIS had violently filled with the establishment of a radical Islamic caliphate that threatened U.S. interests and U.S. allies, including Israel.

Clinton had a marginally better week, though she sustained less damage because Trump failed to direct sustained fire at her and she adroitly explained away one mistake. That was allowing the father of the terrorist who killed 49 in a gay nightclub in Orlando in June to be seated behind Clinton at a Florida rally. The campaign immediately acknowledged he should not have been there and condemned his son’s violent act.

Clinton tried mimicking Trump by delivering her economic vision Thursday, also in Detroit, after previewing it the day before in Iowa. Both were pedestrian, unexciting, and very much status quo with its centerpiece an emphasis on infrastructure that is easy to mock as Obama Stimulus 2.0.  She also called for a public-private federal infrastructure bank, seeded with taxpayer dollars. This can be depicted as more crony capitalism, ala Solyndra.  Alas, none of this was fodder for The Donald’s appearances.  It might have been a much different week had he spent it explaining his approach and grabbing every opportunity for contrast she provided.

Both Candidates Displayed Weakness: Trump’s over-the-top impromptu remarks and the absence of a sustained attack on his issue of the week -- the economy -- have unsettled swing voters who want to support him, further diminished Republican support and aided Clinton’s rise in the polls.

Most problematic, Trump refuses to acknowledge he needs to change, dismissing radio host Hugh Hewitt’s suggestion Thursday that he temper his language in charging Obama founded ISIS. The media, Trump said, “wouldn’t talk about your language and they do talk about my language.” Trump, however, is wrong. The media would still report the charge, only more people would accept it if it weren’t so outrageous. Still, Trump tweeted Sunday that he would not change course: “I am who I am.”

Clinton has critical weaknesses, too. Tuesday’s release of emails from the Clinton Foundation to State Department staffers in a civil lawsuit show Foundation officials pushed for the appointment of a Wall Street banker and Foundation donor and pressed for the State Department to intercede on behalf of a convicted money launderer to set up a meeting with a Lebanese government official. This left the appearance of quid-pro-quo for donors after Clinton had promised in her confirmation hearings to keep her distance from the Clinton Foundation.

Trump’s Poll Decline Continued: The release of a raft of national and state polls last week showed Clinton’s favorables improving and Trump’s unfavorables rising. The result is she has risen modestly since before the national conventions while he has declined, giving her a healthy national lead of 6.8 percent in the RealClearPolitics poll. He is underwater in most battleground states (albeit narrowly in some instances).  He trails in North Carolina, which would leave him below Mitt Romney’s Electoral College total of 206 if the election were held today. Trump also is barely ahead in Georgia and Arizona, which Romney carried handily.

Has Trump bottomed out or near to it? It depends on whether he has a good week and another the week following or not. He’s getting close to a real danger zone: no candidate behind by this amount on Labor Day has gone on to win.

Does Trump Want Voters To Think He Expects to Lose? That’s the impression left by Trump’s talk last week about the “disgusting and corrupt media” and saying “the only way we can lose…Pennsylvania is if cheating goes on.”  Of course the media is not on Trump’s side.  And declaring he can only lose the election if it is rigged is so incendiary a charge that the press will make it the day’s headline. But who’s persuaded to change from undecided or leaning Clinton to Trump because of it? It comes across less as an argument to vote for Trump than an excuse for losing the race.