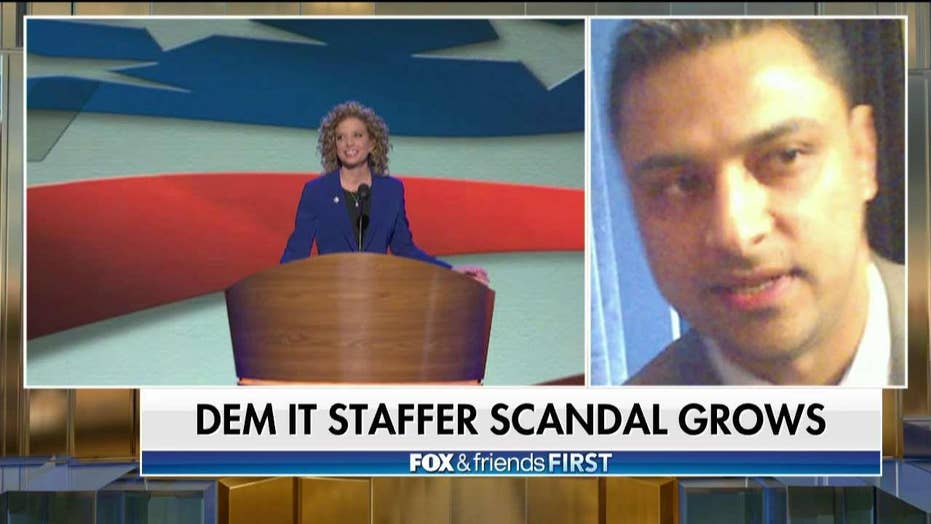 In an incredible sweetheart plea deal, Imran Awan – a former IT aide to Rep. Debbie Wasserman Schultz, D-Fla., and other congressional Democrats – pleaded guilty Tuesday to one count of making a false statement on a home equity loan.

I sat flabbergasted in the courtroom in Washington as the plea agreement was entered.

I spent the last year interviewing hundreds of people and chasing leads for my upcoming book –titled “Spies in Congress” – about the alleged spy ring believed led by Awan that may have operated in the offices of more than 40 Democratic members of Congress.

If not for my extensive research on this case, I might have assumed the government just couldn’t find enough evidence to make a solid case against Awan on more serious charges than bank fraud.

When I asked Justice Department prosecutor J.P. Cooney why the government made this odd plea deal he just smiled and waved me away as he told me to ask the Justice Department Office of Public Affairs. The office declined to answer my questions.

Shockingly, the U.S. Attorney’s Office for the District of Columbia issued a news release about Awan’s plea agreement that made no mention of his IT work for Democrats in Congress, no mention of Wasserman Schultz, and made his case sound like a minor local criminal matter of little interest to anyone. It was headlined: “Virginia Man Pleads Guilty to Making False Statement on Application for Home Equity Loan.”

Ho-hum, right? Actually, nothing could be further from the truth.

Awan is due to be sentenced Aug. 21 and could get off with no jail sentence, according the plea agreement. Prosecutors said they would not recommend jail time – in effect, giving Awan a get-out-of-jail-free card.

Just like that, the Department of Justice is making an important case go away as if nothing much happened.

Awan’s wife, Hina Alvi, is having all charges against her dismissed as part of the agreement.

Awan, as a part of this plea agreement, also “will not be charged” for any other nonviolent crimes he may have committed in Washington prior to the agreement, according to this deal.

The plea deal agreement even exonerates Awan by saying in part that “the Government agrees that the public allegations that your client (Imran Awan) stole U.S. House of Representatives (‘House’) equipment and engaged in unauthorized or illegal conduct involving House computer systems do not form the basis of any conduct relevant to the determination of the sentence in this case.”

But there is so much more to this case. Even on the simple theft of government equipment there is a lot there for prosecutors. One of Awan’s former tenants, a retired U.S. Marine, even found and turned over to authorities several computers and smart phones with government markings on them that he found in Awan’s rental property.

There is also internal U.S. House of Representatives’ paperwork detailing some of what went on in the offices Awan and his associates who did contract IT work for congressional Democrats.

Internal House Inspector General findings have also determined that Awan copied the emails of up to 44 Democratic House members and other personal data and backed them up to a server that reportedly went missing and to a Dropbox account.

Awan, his wife and other relatives and friends were also all paid exorbitant salaries for working as IT contractors for members of Congress for years – even though many of them didn’t have any expertise in IT and even though they didn’t undergo background checks.

It is also likely that a few of Awan’s associates didn’t even show up to earn all the money they were paid. Still, no charges have been filed against Awan or his brothers relating to alleged thefts, possible espionage and for providing false information (an image of the Democratic House Caucus computer server) to Capitol Police.

It is actually very hard to sum-up all that this group of IT aides (who are almost all from Pakistan) did and the crimes they might have committed.

Writing a book on the topic was like piecing together an international spy thriller filled with anonymous sources, encrypted conversations, off-the-record meetings, foreign documents and hard facts from various court filings and from internal investigations in the House.

What is clear to me, after interviewing so many people, is there is a lot of evidence here for investigators, but also a lot of political reasons why they might want this case to go away.

Awan was even Wasserman Schultz’s IT aide when she headed the Democratic National Committee (DNC), which incidentally was when the DNC was hacked and the information given to Wikileaks.

I have no evidence that Awan was in any way responsible for the leak. Still, it is incredible how much of all this interconnects circumstantially.

Real court scenes (when Awan pleaded guilty and waved his right to a trial by jury), possible depositions of House staffers and members of Congress, and the investigations that would take place if the Justice Department pursued additional charges would have necessarily dug into a lot of things the Washington establishment would rather not deal with publicly. It also would have forced investigators to follow the trail to Pakistan.

Still, I didn’t think these investigating agencies would be brazen enough to agree to this kind of a sweetheart deal for Imran Awan and Hina Alvi.

Now Awan will not face prosecution where the more serious allegations against him can be judged.