Judge Jeanine: Do what you were elected to do, stand up for your country and your constituents

This week newly elected Congresswoman Rashida Tlaib, just hours after the honor of being sworn in to the United States Congress had this to say:

“When your son looks at you and says, "Mama, look you won.  Bullies don't win," and I said, "Baby, they don't.  Because we are going to go in there and we're going to impeach the [expletive deleted]."

Rashida, so our country allows your family to come here, start a new life in America with all its advantages, protections and privileges -- unlike anything they experienced in Palestine -- and your first act after being allowed the privilege of running for the U.S. Congress and then winning a seat in that hallowed chamber, the People's House is to curse out the president of the United States?  Promising his impeachment with absolutely no facts to support the charge, violating the very Constitution you just swore to uphold.

And by the way, show me where in the Constitution, Rashida, it says you can impeach a president because you hate him?  The greatest nation on Earth, through its largesse opens its doors and lays out the welcome mat for your mother and father, whom I'm sure thanked God when they got here, and you get to the national stage and call the commander-in-Chief a "mother-effer" in a public forum?  Demanding impeachment?  Who are you?

Well, for one, we know you're a Democrat and a socialist and as Winston Churchill said, "Socialism is a philosophy of failure.  The creed of ignorance and the gospel of envy," and although Palestinians from your homeland may be waving flags for you, you're an American in the U.S. Congress representing Americans, madam, not Palestinians.

Your dance should be one with and under the American flag and you have promised to vote against all U.S. military aid to America's sole partner in the Middle East, Israel because they discriminate against Palestinians.

Discriminate? You don't like Israel. OK, I have an idea.  When the Palestinians and the PLO support the United States like Israel does, then we won't need to send them money and in case you didn't know, Hamas is a designated terrorist organization that was birthed in Palestine.

Are you really against racism? Or just Israel?  Like your friend Linda Sarsour, do you just want Israel eliminated from the river to the sea? A primer -- do what you were elected to do, stand up for your country and your constituents -- Americans -- I repeat, Americans want a strong economy so they can get a job, put food on the table, pay their rent or mortgage.

They want safety and security for their families. They want the law to be applied equally, applied the same with no one above it and no one below it.

Your constituents want legislators who will work and not waste time or taxpayer dollars and instead, work toward those goals instead of engaging in personal vendettas against the president.

But the hypocrisy is not just yours, it's your party's new M.O.

They talked a good game -- civility, working together, working for the American people,not focusing on hate -- and no surprise, their first order of business on their inaugural day as the majority party in the House was about hating President Trump. 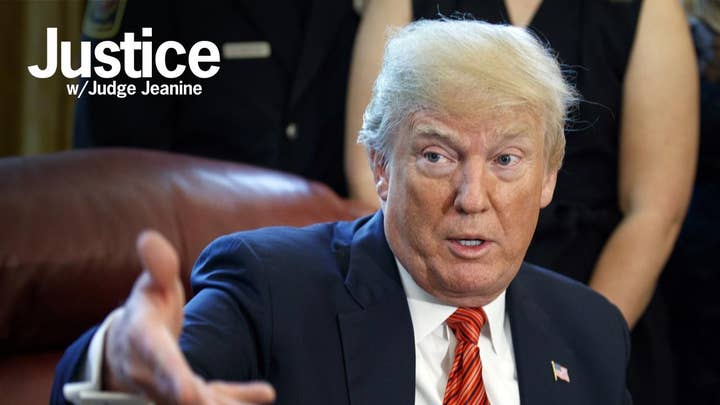 Democratic Congressman Brad Sherman of California wasted no time introducing Articles of Impeachment against President Trump.  Right when we've got the best jobs report this country has seen in nearly a decade.  Does that make sense to you, Rashida?  And your fellow Democrats Steve Cohen of Tennessee has already introduced a constitutional amendment to get rid of the Electoral College; yet another blatant attempt to violate and upend the Constitution.

Congressman Hank Johnson compared Trump to Hitler this week. You call him an "mf'er" because you don't like the way he talks, but you don't have the guts to follow through with your claim.  When you're confronted by the press, you whimper away and run from the American media.

Did Nancy Pelosi rein you in, Rashida?  The president is improving the economy, making us safer and yes, building a wall and you want to impeach him?

Is this what we can look forward to for the next two years? The old impeach 45? You want Donald Trump out of office?  Be careful what you wish for.  He's not the only one who could be voted out in 2020.

Author's note: And that' my open.  If you like my "Opening Statements," you'll love my new book, "New York Times" number one bestseller, "Liars, Leakers and Liberals: The Case against the Anti-Trump Conspiracy."