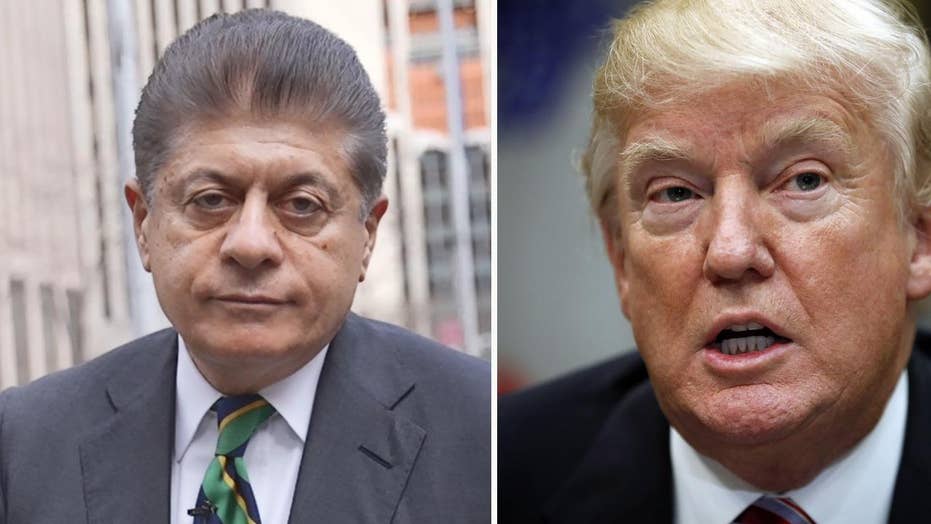 Napolitano: Trump's budget adds up to $1 million a minute

Judge Napolitano's Chambers: Judge Andrew Napolitano explains how Trump's new spending bill will increase the deficit and what that means for our children's children.

Imagine you open the faucet of your kitchen sink expecting water and instead out comes cash. Now imagine that it comes out at the rate of $1 million a minute. You call your plumber, who thinks you’re crazy. To get you off the phone, he opines that it is your sink and therefore must be your money. So you spend it wildly. Then you realize that the money wasn’t yours and you owe it back.

Now imagine that this happens every minute of every day for the next three years. At the end of the three years, you owe back more than $6 trillion. So you borrow $6 trillion to pay back the $6 trillion you owe.

Is this unending spigot of cash reality or fantasy?

I am not speaking of Amazon or Google or Exxon Mobil or Apple. They deliver products that appeal to consumers and investors. They deal in copious amounts of money because they sell what hundreds of millions of people want to purchase and they do it so efficiently that hundreds of thousands want to invest in them. If they fail to persuade consumers to purchase their products and investors to purchase their financial instruments, they will go out of business.

My analogy about all that cash in your kitchen sink that just keeps coming is not about voluntary commercial transactions, which you are free to accept or reject. It is about the government's spending what it doesn’t have, the consequences of which you are not free to reject.

Government produces no products that consumers are willing to pay for voluntarily, and it doesn’t sell shares of stock in its assets. It doesn’t generate wealth; it seizes it. And when it can no longer politically get away with seizing, it borrows. It borrows a great deal of money -- money that it rolls over, by borrowing trillions to pay back trillions to prior lenders, and thus its debt never goes away.

Last week, after eight years of publicly complaining that then-President Barack Obama was borrowing more than $1 trillion a year to fund the government -- borrowing that the Republicans silently consented to -- congressional Republicans, now in control of Congress and with a friend in the Oval Office, voted to spend and hence borrow between $5 trillion and $6 trillion more than tax revenue will produce in the next three years; that’s a few trillion more than they complained about in the Obama years.

Obviously, no business or household or bank can survive very long by borrowing from Peter to pay Paul. Yet the federal government, no matter which party controls Congress or the presidency, engages in staggering borrowing -- borrowing that will cripple future generations by forcing them to pay for goods and services that were consumed before they were born.

The government has often borrowed to meet critical emergency needs, typically during wartime. Indeed, the country was born in debt when Alexander Hamilton, the father of big government, offered the idea that the new federal government created by the Constitution could purchase the fidelity of the states by assuming their Revolutionary War debts.

But those debts were paid back using inflation, gold and tax dollars, and the country enjoyed sporadic periods of nearly debt-free government. Then three unhappy events coincided about 100 years ago: Woodrow Wilson -- the father of modern-day big government -- was elected president, and he brought us into the useless battle over national borders among old European royalty called the Great War, and he financed American participation in that first world war using the new printing presses owned by the new Federal Reserve System.

The $30 billion President Wilson borrowed from the Federal Reserve and others has been rolled over and over and has never been repaid. The federal government still owes the $30 billion principal, and for that it has paid more than $15 billion in interest. Who in his right mind would pay 50 percent interest on a 100-year-old debt? Only the government.

Wilson’s $30 billion debt 100 years ago has ballooned to $20.6 trillion today. At the end of President Donald Trump’s present term -- because of the Republican budget signed into law last week -- the government’s debt will be about $27 trillion.

That $1 trillion is 40 percent of the revenue collected by the federal government; that’s 40 cents on every dollar in tax revenue going to interest on old debts -- interest payments that are legally unavoidable by taxpayers and voters.

Borrowing money at $1 million a minute is digging a hole out of which we will never peacefully climb. President Obama’s and President Trump’s own military and intelligence chiefs have argued that the national debt -- not the Russians or the Islamic State group or the North Koreans -- is the greatest threat to freedom and security that we face today.

Why are Congress and President Trump not listening?