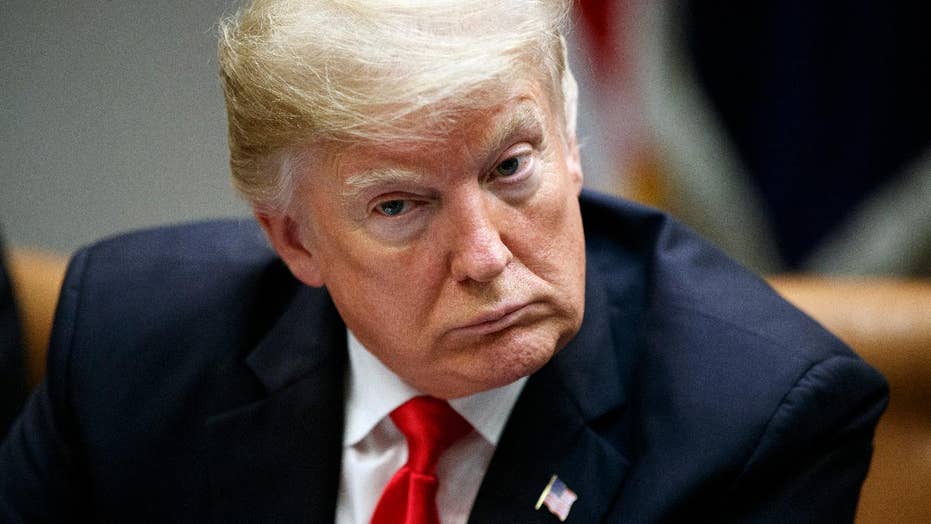 Judge Napolitano's Chambers: Fox News Senior Judicial Analyst Judge Andrew Napolitano explains why two the criminal investigations against President Donald Trump are closing in and how the president's agenda could be placed in jeopardy.

It seems that every time we look at the legal maneuverings that reflect upon President Donald Trump, the allegations of unlawful behavior by him add up. We know that two teams of federal prosecutors are examining his pre-presidential and his in-office behavior.

Special counsel Robert Mueller is investigating whether Trump and his campaign reached an agreement with any foreign nationals -- particularly Russians -- to receive anything of value and whether he obstructed justice by trying to shut down an FBI investigation of his first national security adviser, retired Lt. Gen. Michael Flynn. And federal prosecutors in Manhattan are looking at bank fraud and campaign financing fraud.

The receipt by a campaign for federal office of anything of value from a foreign national is a criminal act, as is an agreement to receive the thing of value from a foreign national, whether or not it arrives. As is the case with nearly all federal crimes, one can be prosecuted for committing the crime itself or, when others are involved, for conspiring to commit the crime or for attempting to commit it.

The career federal prosecutors in New York have told a federal judge that they have evidence that Trump conspired with Michael Cohen, his former lawyer, and David Pecker, his former friend who owns the National Enquirer, to violate campaign finance laws. They have also told the judge that Trump orchestrated Cohen's crimes and paid Cohen to commit them. The prosecutors know that he who pays for crimes can be as criminally liable as he who accepts the payment and commits the crimes.

What were the crimes? They consisted in hiding illegal campaign receipts and expenses from federal regulators and deceiving them. The receipts were corporate donations -- prohibited under federal law. The expenses were payments made to two women who claim to have been paramours of Trump's -- claims he has repeatedly denied -- in return for their silence in the fall of 2016, all done to benefit Trump's presidential campaign.

Had these receipts and payments been innocent mistakes or clerical errors, they could have been addressed with fines and returning the money -- about $350,000 -- to the donors. They became criminal because the donations were part of an elaborate scheme of cooked books and phony invoices to deceive federal regulators, and they resulted in the Trump campaign's filing false reports to the feds. All of this was done, according to federal prosecutors, knowingly and intentionally pursuant to a conspiracy among Trump, Cohen and Pecker.

What became of the conspirators? Cohen infamously pleaded guilty to this and other crimes and was sentenced to three years in a federal prison. When Trump learned that his former lawyer had been debriefed by the FBI for 70 hours, Trump called him a "rat." Pecker received a form of immunity from prosecution in return for his testimony to federal prosecutors and to a federal grand jury about Trump and Cohen.

It is highly unusual for federal prosecutors to characterize a person who is not a defendant in their case as the orchestrator and paymaster of the crimes they are prosecuting, unless they intend to charge that person. Such a person -- here, the president -- is often referred to as an "unindicted co-conspirator."

All three opinions counsel that if a statute of limitations -- the period of time after the crime has been committed and during which a prosecution must be commenced or waived -- is about to expire, the president may need to be indicted in secret, so as to preserve the government's ability to prosecute him for his crimes after he leaves office yet also preserve the president's ability to conduct the duties of his office unimpeded by the burdens of a criminal prosecution.

The statute of limitations in this case is five years. The conspiracy took place in 2016. The math for Trump is daunting.

Why should you care about this? The president is the chief federal law enforcement officer in the land. He has sworn an oath to enforce all laws faithfully. If he is a lawbreaker himself, he violates his oath, making it difficult for the legal, judicial and law enforcement communities to take his enforcement decisions seriously.

This week, Flynn was due to be sentenced for lying to the FBI. (His sentencing was postponed.) Though it may appear at first to have been a little white lie and though the FBI no doubt knew it was a lie at the time Flynn articulated it, it turns out that Flynn was also a paid foreign agent for Turkey -- a spy, if you will, for an ally we currently have a strained relationship with -- while working in the Trump campaign. Had U.S. District Judge Emmet Sullivan not skeptically approached the sentencing of Flynn, we might not know any of this. Did Donald Trump know any of this when he hired Michael Flynn?

The rule of law in America is what keeps us free from tyranny. The rule of law -- which the president has sworn his solemn oath to support -- means that no one is above the law's requirements or below its protections. It also means that those who make law enforcement decisions have a public commitment to obeying the law.