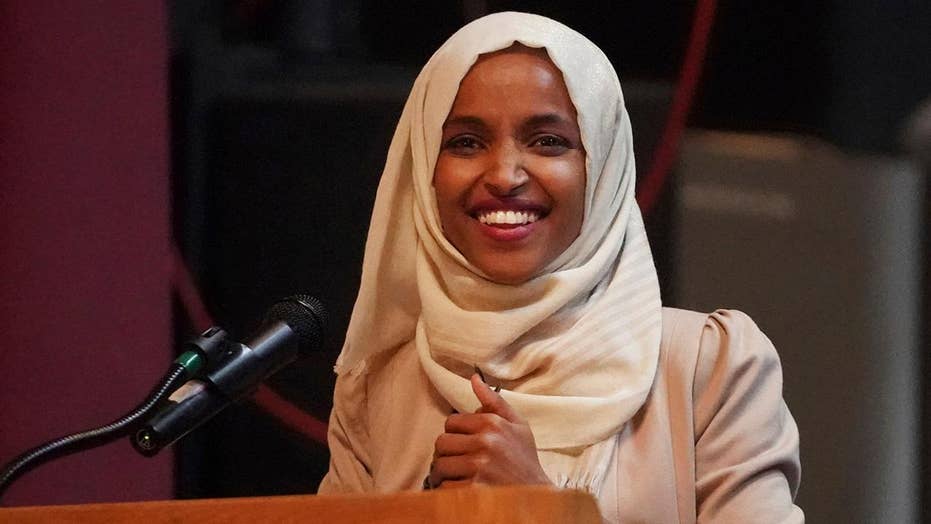 Rep. Omar says racism has always been a part of President Trump

Democrat Rep. Ilhan Omar addresses her ongoing feud with the president at the Muslim Collective for Equitable Democracy event; Mark Meredith reports from the conference.

“Now hatred is by far the Longest pleasure;

“Men love in haste, but they detest at leisure.”

When I was an undergraduate at Princeton University during the height of the Vietnam War, surrounded by fellow students who condemned it and even some who later left our country to avoid fighting in it, the mantra used by supporters of the war was, "America, love it or leave it." In my misguided "Bomb Hanoi" youth, I uttered this phrase, which I now detest.

The phrase itself – with its command of the government's way or the highway – admits no dissenting opinions, suggests that all is well and proper here, and insinuates that moral norms and cultural values cannot be improved. The phrase itself is un-American.

That era also produced such hate-filled catchphrases as: "Hey, hey, LBJ; how many kids did you kill today?" Those post-JFK and pre-Watergate times were harsh and bitter, as the nation was deeply divided over a war we now all know was useless and based on deception and fraud.

We know from the publication of the Pentagon Papers that the incidents President Lyndon B. Johnson claimed justified the war never occurred, and the president and some of his generals regularly lied to the American public about the war.

The lies and deceptions – combined with the military draft and the deaths of 58,000 Americans – produced much hatred. The hatred was for people, rather than ideas. It was generational and ideological.

Youth hated age. Long hair hated short hair. Conservatives hated liberals. Many people hated LBJ personally. When President Gerald R. Ford declared the war had ended – though in a colossal defeat – the end produced a great national relief because the national hatred of people was over.

Now, that hatred is back.

The problem is that presidential hatred produces division among people and destroys peaceful dialogue.

I have known President Trump personally since 1986. The private Trump I have known is funny, charming and embracing. That is not the public Trump of today. When he loudly called for four members of Congress – women of color who oppose nearly all his initiatives and who have questioned his fitness for office – to go back to the places from which they came, he unleashed a torrent of hatred.

The "Go back" trope was used by white racists toward African-Americans for 100 years, from Reconstruction to the civil rights era, suggesting repulsively that they should go "back" to Africa; never mind their American births. It was uttered by the establishment at my grandfathers and many others who came here from southern Europe as children in the early days of the last century.

"Go back" is a rejection of the nation as a melting pot; a condemnation of one of America's founding values – E Pluribus Unum (Out of many, one). It implicates a racial or nativist superiority: We were here before you; this is our land, not yours; get out. Nativist hatred is an implication of moral or even legal superiority that has no constitutional justification in American government.

So, when the president defies these moral and constitutional norms and tells women of color to "Go back," he raises a terrifying specter.

The specter is hatred not for ideas he despises but for the people who embrace those ideas. The specter is also a dog whistle to groups around the country that hatred is back in fashion and is acceptable to articulate publicly.

Don't get me wrong. Even though hate speech – speech that expresses hatred for people, as opposed to hatred for ideas – stings and hurts, it is constitutionally protected. The remedy for hate speech is not to silence the hater but to shame him. And the most effective way to do that is with more speech.

But when the hate speech comes from a shameless president, we have a problem.

The problem is that presidential hatred produces division among people and destroys peaceful dialogue. When thousands of people at a Trump rally in North Carolina recently chanted, "Send her back" referring to a congresswoman born in Somalia – and Trump tweeted that the four congresswomen (including three born in the U.S.)  should "Go back" to where they came from – the inescapable image was of a president trying to divide rather than unite.

At first, Trump seemed to welcome the chants. Then, two days later, he distanced himself from those who chanted. Then, three days after that, he praised the chanters.

When a Louisiana police officer tweeted that one of the congresswomen Trump targeted deserved a round – he was referring to a bullet – he and a supportive colleague were fired. And in New York City, hatred for cops has led to group assaults on them, along racial lines.

Hatred is so volatile and destructive that, once unleashed, it takes on a life of its own. It is cover for our deepest and darkest instincts. And it is a cousin to violence, as those Louisiana and Manhattan cops know.

It also captivates our attention. Could that be the president's wish – that we think about hatred of his targets rather than the testimony of former Special Counsel Robert Mueller, who spent two years investigating the president and testified before two House committees Wednesday?

This business of the hatred of people is so dangerous because to some, as Lord Byron wrote, hatred is perversely pleasing. It gives them shelter in a mob, it lets them hurl venom with anonymity, and it regenerates itself. It must be rejected loudly in all its forms – especially when it comes from the president.