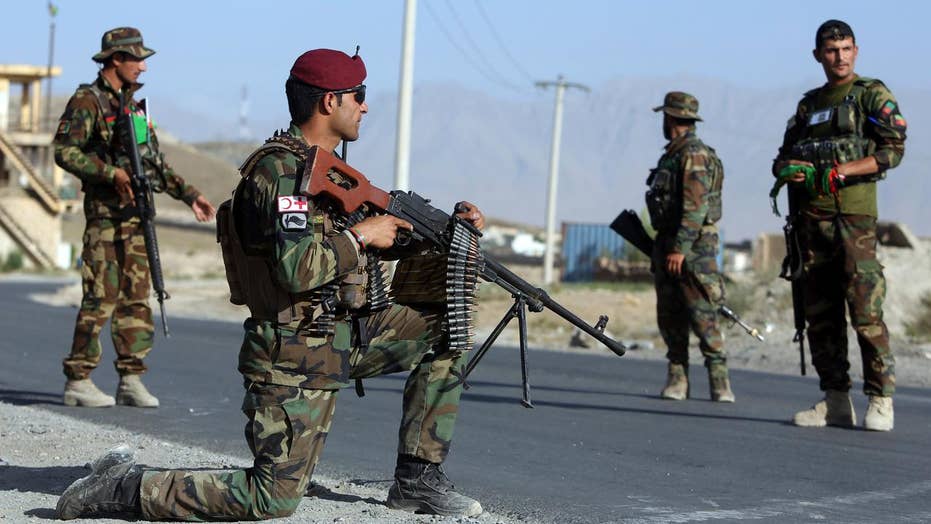 The fundamental problem with past, present Afghanistan plans

On the heels of his worst week in office, during which his crude comments about race were widely perceived as defending racism and hatred -- comments that sent some of his natural domestic allies fleeing -- President Donald Trump could not bring himself to articulate a mea culpa.

Instead, he purported to defend as "some very fine people" the monsters who shouted "Jews will not replace us" and "blood and soil" (a virulent Nazi slogan calling for lands where only Aryans may live) as they clashed with those who rejected their messages in Charlottesville, Virginia.

FILE - In this Aug. 21, 2017 file photo, President Donald Trump gestures during a Presidential Address to the Nation about a strategy he believes will best position the U.S. to eventually declare victory in Afghanistan, Fort Myer in Arlington Va. Behind the detail-scarce rhetoric of the new Afghanistan strategy, elements of President Donald Trump's broader approach to foreign conflicts emerge: secret military plans, no "nation-building" and a reliance on regional players to squeeze wayward nations and extremist groups. (AP Photo/Carolyn Kaster, File) (AP)

Police failure and general government indifference about the freedom of speech permitted one of the racists to kill one of those who had come to reject the hate.

After the deceased was identified, one of the neo-Nazis there said she deserved to die because she was "fat." It is difficult for me to accept that I am writing about neo-Nazis calling for racial purity and rejoicing in the death of an innocent -- in America in 2017. But here we are. They are among us, and these subjects must be addressed.

At first, the president made a rambling statement about bad people on "both sides"; then he read a nicely worded attack on racists; and then he held a disastrous impromptu news conference in which he was so morally ambivalent that he seemed to reject his duty as president.

Rejecting, as well, the pleas of those around him to renounce his own failure to renounce his moral ambivalence -- which won him a public accolade from the most notorious Ku Klux Klan fanatic in the country -- Trump decided to change the subject.

Like former President Bill Clinton after his disastrous public appearance before a federal grand jury that was investigating him, Trump decided to fight a war. But the war he announced we will "fight to win" earlier this week is the longest, most misguided, costliest and least understood war in our history, and we are fighting for people who hate us.

If these phrases and ideas sound familiar, they should. They are not my words -- though I agree with them -- but those of candidate Trump. He articulated them forcefully to the American electorate during last year's presidential election campaign. He actually began attacking the war in Afghanistan long before he announced his presidential candidacy.

If he has been consistent on any public issue, it has been his opposition to this useless, lawless, costly war -- until he needed to change the subject.

Why war? Because nothing strengthens the presidency and its occupant or commands the attention of the public or weakens domestic political opposition as effectively as war.

No rational person will argue publicly that our troops should die or lose or lack the resources to fight even an unjust war, and often even political opponents will jump on a wartime president's patriotic bandwagon. We will witness that scene again soon.

With the last anti-war holdout in his inner circle -- Steve Bannon -- gone, Trump embraced the present and former generals with whom he has surrounded himself and surrendered to their arguments.

I wish he had been faithful to his promise to the electorate to bring the troops home. Instead, he will send an unannounced number of service members and accompanying equipment to Afghanistan -- not to rebuild the bridges and roads the U.S. destroyed there but to fight, to kill and to "win."

The British tried to tame this unruly barren wasteland, which has never had a modern-day central government, back in the 19th century, and the Russians tried to do the same in the 20th century. They both lost a generation of soldiers and a fortune.

On Sept. 11, 2001, the United States was attacked by 19 religious fanatics, most of whom were from Saudi Arabia. These monsters were funded by Saudi wealth.

But President George W. Bush needed some country to attack in the aftermath, so he convinced Congress that since we couldn't attack the dead people who attacked us or our "friends" -- the Saudis -- who financed them, we should attack their ideological comrades residing in a safe haven called Afghanistan. Instead of attacking the 9/11 attackers' sources, we attacked their friends.

During the Republican presidential primary debates, Trump himself savaged former Florida Gov. Jeb Bush so aggressively over his efforts to defend his brother's decision to invade Afghanistan that the younger Bush quit the race; and Republicans voted for Trump in droves.

We have already spent more than 1 trillion borrowed dollars there, sent more than 100,000 troops there, killed countless innocents there, destroyed towns, cities and ancient artifacts there, lost billions in cash and equipment there; and whomever we have been fighting there for 16 years still controls more than 40 percent of the country.

What are we doing there? How will we know if we have won there? When will we come home for good from there?

The answers to these questions are deadly but easy -- when the subject has been changed here.