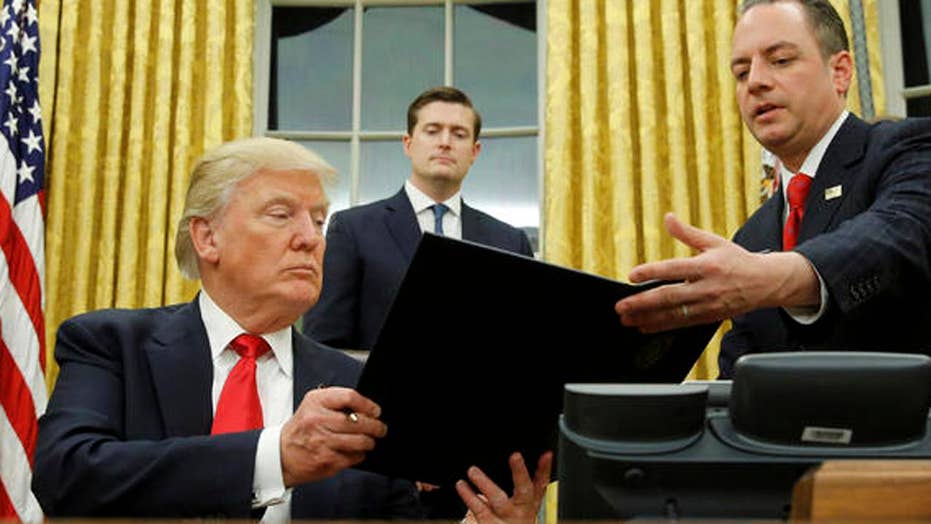 The Trump cabinet is the first in thirty years — President Reagan through President Obama — without a single Latino.

"This is a disaster and setback for the country," Arturo Vargas, the executive director of the National Association of Latino Elected And Appointed Officials (NALEO) told the Associated Press last week. "The next time a president convenes his Cabinet there will be no Latino perspective."

This is not about being politically correct.

The absence of Latinos at the White House comes as President Trump is already at odds with the nation’s largest minority group, and especially with people from Mexico.

Last week, he signed an executive order calling for the construction of a border wall with Mexico. That led the president of Mexico to cancel a trip to the White House.

Also last week, Trump ordered a crackdown on so-called “sanctuary cities” where local agencies do not question people about their immigration status and police do not report all criminals lacking immigration papers to federal immigration authorities.

Most of the undocumented immigrants in the “sanctuary cities” targeted by the president are Latinos.

At a meeting with congressional leaders and in a later ABC News interview, Trump falsely claimed that millions of illegal immigrants, the majority of whom are Latinos, voted in the election, thus causing him to lose the popular vote.

Trump’s anger at Latinos comes after a campaign where he stirred white resentment towards America’s southern neighbor with his call to “build the wall.” He often asked fans at rallies to name the country that was going to pay for it. The loud response? “Mexico.”

He also slandered federal judge Gonazlo Curiel — an American born in Indiana to Mexican parents — as a “Mexican” who could not be impartial in the Trump University fraud case because of his ethnic background.

That attack was so vulgar that even Speaker Paul Ryan (R-Wis.) labeled it the “textbook definition of a racist comment.”

In his first week in the White House, Trump poured fuel on his antagonistic relationship with Latinos.

Many Hispanic GOP stalwarts — including some who served Republican presidents — have distanced themselves from Trump over his anti-Mexican attitude.

President George W. Bush’s Commerce Secretary, Carlos Gutierrez, even endorsed Hillary Clinton. Gutierrez told NPR last year that Trump’s comments about Curiel “shattered the whole idea that we don't judge people on the basis of where they come from or where their parents came from” and said Trump was guilty of “bigotry” and “bullying.”

Linda Chavez, the highest-ranking woman in Ronald Reagan’s administration and a Bush Cabinet nominee, declared herself “anti-Trump” and called him a “disaster” and a “vile human being” because of his anti-immigrant comments.

Meanwhile, in the 115th Congress there is an all-time record high number of Hispanic senators and congressman — 38 in total — including the first Latina elected to the Senate, Catherine Cortez Masto, a Nevada Democrat.

However, none of these leaders hold positions in the upper echelons of the party’s leadership.

Xavier Becerra of California, the former chairman of the House Democratic Caucus, was the top ranking Latino in Congress last year. He stepped down to become California’s Attorney General. Of the top four leadership posts in both chambers for both parties, none is held by Hispanics.

The only Latino in any congressional leadership post is Rep. Linda Sanchez (D-Calif.), who was recently named as the Vice Chairwoman of the House Democratic Caucus.

State and local representation for Latinos is not much better.

There are only three Hispanic governors in the United States, all of whom are Republican, while most Latinos are Democrats.

As I wrote in this column in August, there was vocal disappointment in the Latino political establishment that Hillary Clinton did not choose a Hispanic as her running mate. She tapped Sen. Tim Kaine (D-Va.), a white man who speaks fluent Spanish, and passed over popular Latino Democrats like Becerra, former Labor Secretary Tom Perez and former Housing and Urban Development Secretary Julian Castro.

And in the current race to lead the Democratic National Committee, there is no urgent rallying around Perez, the lone Latino in the race.

It is actually harder to explain the absence of Latinos among Democratic leaders than it is to explain the dearth in the Trump camp. According to exit polls, Democrat Hillary Clinton won 66 percent of the Latino vote last November.

At the moment, however, it is the absence of Latino voices in the White House that is painful and striking.