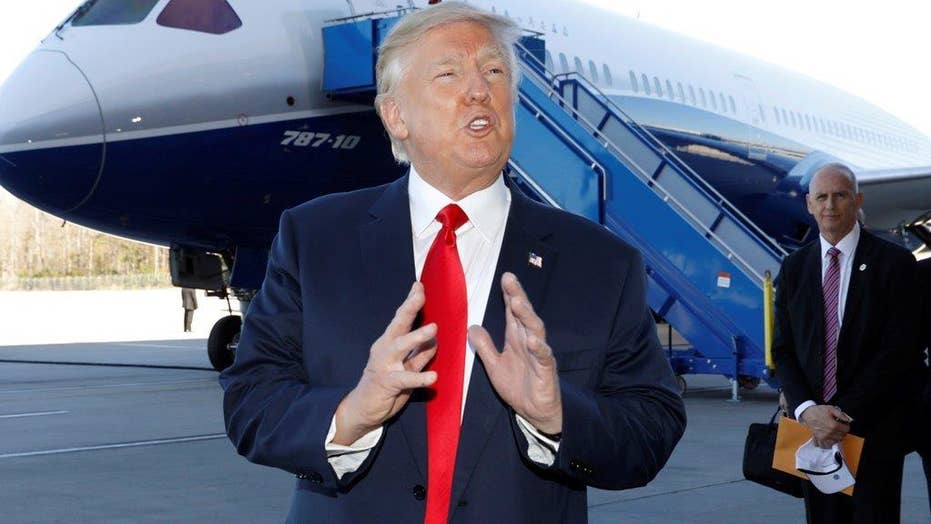 Will GOP work with Trump to implement agenda?

Reaction on 'Hannity' to remarks by House Speaker Ryan

At what point do Republicans in Congress start looking out for their political future and go after President Trump’s ties to Russia?

Even before the president’s national security adviser Michael Flynn was forced out, Gallup had President Trump with the worst ratings of his presidency so far — 55 percent disapproval to 40 percent approval.

At that point, the top Republican in the Senate, Majority Leader Mitch McConnell (Ky.), began talking like a man concerned about keeping his majority.

He complained to the conservative Weekly Standard that the president’s approval numbers would be “10 to 15 points higher if he allowed himself to stay on message.”

“What [Trump’s] saying makes everything harder,” McConnell said — and that was before Trump’s epic Thursday press conference in which the president claimed stories about Russian involvement in the election amounted to “fake news.”

Flynn was forced to resign, apparently for misleading Vice President Mike Pence about a phone call he held with the Russian ambassador during which U.S. sanctions were discussed. That was followed by a New York Times report of regular contact between Trump campaign officials and Russian intelligence agents in the year leading up to last November’s election.

McConnell’s tone took on a sharp edge as he began separating himself from Trump.

If a White House scandal begins to damage the GOP brand, the political dynamic will shift. The 2018 midterm elections defined by Trump scandals will threaten Republican control of the Senate — not the Trump White House.

If Republicans in Congress look to be covering up a national scandal, they open the door to a “change election” that pushes them out of power.

The Senate Intelligence Committee has already pledged to investigate the Russian controversy. But that is not enough for Sen. Claire McCaskill, D-Mo., who argues that the GOP majority on that panel could lead to a cover-up.

“Republicans need to look in the mirror and do a gut check,” she told The New York Times. She wants an open, public investigation in the form of a select committee.

Top Senate Republicans are resisting a select committee so far.

But the counter-threat for Republicans is the prospect of a catastrophic 2018 election.

Sen. Charles Schumer, D-N.Y., the Senate Minority Leader, is not ramping up the calls for a select committee. He only asked that McConnell and Sen. Richard Burr, R-N.C., the head of the Intelligence Committee, promise to “making their findings as public as possible,” including open testimony from Trump campaign and transition officials.

Burr pledged there would be no political limits on the probe, promising his committee will “go anywhere the intelligence leads.”

Already, Senate Republicans are open to writing a law requiring Congress to sign off on any changes in the current sanctions against Russia imposed by the Obama administration.

It is a different story in the House, where fear of blowback from Trump supporters has the leadership playing defense for the president.

The House Intelligence Committee is chaired by Rep. Devin Nunes, a California Republican who served with Gen. Flynn on Trump’s presidential transition team at a time when some of the illicit communication between Trump’s team and Russia apparently was going on.

Does this mean that Nunes is investigating himself, along with his House colleagues who also served on the transition team?

In addition, House Oversight and Government Reform Chairman Jason Chaffetz, R-Utah, said last week his committee would not be investigating the Flynn scandal.

"I think that situation has taken care of itself,” Chaffetz said. “I know that the Intel committee is looking into the hacking issue.”

Chaffetz had no problem asserting his committee’s broad jurisdiction over matters of national security when they were looking into Benghazi.

Chaffetz did call for an investigation by the Department of Justice on the Russian issue —  but not into Flynn, only into who leaked the transcripts to reporters.

That is consistent with Trump’s complaint that the real story is media bias against him, as well as leaks from the intelligence agencies intended to do political damage.

Senate Republicans have fully accepted that there needs to be some form of investigation.

“I don’t think we need to go through setting up a special committee,” McConnell said. “But we are going to look at Russian involvement in the U.S. elections. It’s a significant issue.”

Just as Ryan mishandled Trump’s candidacy during the campaign, he is mishandling Trump’s presidency. Ryan did chide Trump over the Muslim ban and his slander of Judge Gonzalo Curiel’s integrity on the basis of his ethnicity. But Ryan still backed him on the basis of party unity.

McConnell, on the other hand, kept his mouth shut and never took the bait when asked to respond to a Trump tweet or rude remark, instead focusing on preserving his Senate majority.

As last week showed, McConnell is a much shrewder political operator than his party colleagues in the House.

He is putting daylight between Trump and the fate of the Senate GOP majority.