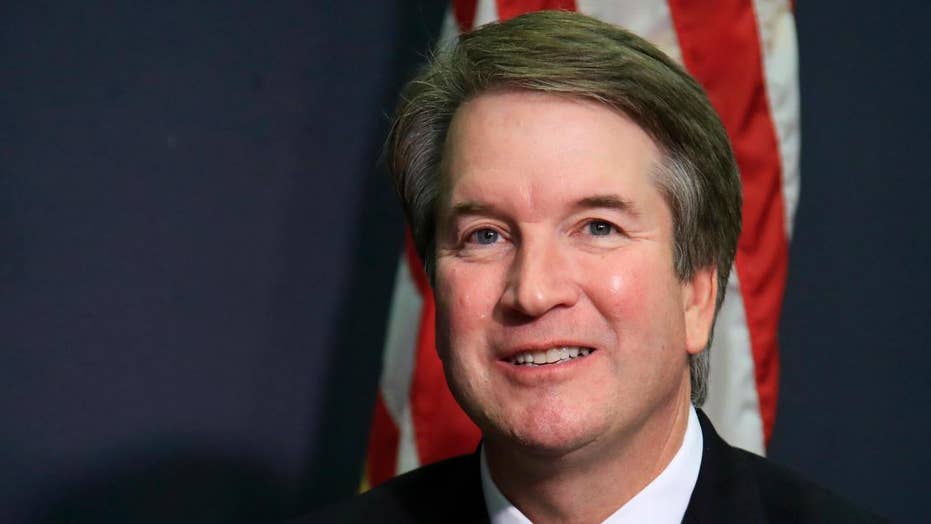 After sitting through almost seven hours of opening statements from senators and repeated outbursts from protesters at his confirmation hearing Tuesday, Judge Brett Kavanaugh showed why he would be an outstanding Supreme Court Justice when he delivered a brief opening statement.

Democrats desperate to keep this extraordinarily qualified judge off the nation’s highest court never let up in their daylong demonization of the judge, who currently serves on the U.S. Circuit Court of Appeals for the District of Columbia.

But Kavanaugh was calm throughout the hearing conducted by the Senate Judiciary Committee and finally responded by emphasizing a judge’s duty to correctly interpret the law, rather than bending it to achieve his or any other judge’s view of the best policy.

Kavanaugh directly responded to those who demand only that he decide their way on their favorite policy issues of the day.

Democrats are going to get nowhere trying to attack Kavanaugh on his possible future rulings on health care or abortion. Indeed, Kavanaugh has written nothing significant about these or other hot social issues – which is why some religious conservatives launched a whisper campaign against him immediately after Justice Anthony Kennedy’s retirement.

Like nominees of all stripes since the Senate rejected Robert Bork’s nomination to the Supreme Court in 1987, Kavanaugh will refuse to answer questions on any specific matters that might come before as a justice. That’s appropriate – Supreme Court justices should judge cases based on the evidence and legal arguments that are presented to them, not based on their preconceived personal views.

It’s too bad that Democratic senators who entered the confirmation hearing with closed minds – determined to oppose Kavanaugh regardless of what he says or what his record shows – don’t show the patience, moderation, and good spirits that Kavanaugh displayed Tuesday.

The judge called for a return to the civility and common sense that used to characterize America’s greatest institutions of government. That’s something both Democrats and Republicans should agree to.

“The Supreme Court must never be viewed as a partisan institution,” Kavanaugh said. “The justices on the Supreme Court do not sit on opposite sides of an aisle. They do not caucus in separate rooms. If confirmed to the court, I would be part of a team of nine, committed to deciding cases according to the Constitution and laws of the United States.”

That kind of reasonableness could make Kavanaugh a far more influential player on the Supreme Court than Democrats may think. While the late Justice Antonin Scalia and the late Chief Justice William Rehnquist could excite with cutting prose or daring ideas, they had difficulty building winning coalitions on the high court for conservative jurisprudence.

Kavanaugh made clear that he would instead follow the example of Justice Kennedy, who he was nominated to replace for whom he clerked.

Kavanaugh described Kennedy as his mentor and hero, and called him “a model of civility and collegiality.”  If Kavanaugh were to apply his reasonableness and persuasive talents on the Supreme Court, he might move the court toward the more restrained, limited role that conservatives have hoped for these last three decades.

In both legitimate and illegitimate ways, liberals attempted to block the start of the first day of Kavanaugh’s confirmation hearing. Police had to remove protesters from the hearing room and several dozen were arrested.

Democratic senators repeatedly interrupted the Judiciary Committee chairman, Sen. Chuck Grassley, R-Iowa, when he delivered his mild opening statement, The Democrats unreasonably demanded a delay over the late release of thousands of pages of documents by the White House. This was an obvious stalling tactic without justification.

Such delaying tactics, however, reveal a Democratic Senate minority that has little stomach for conducting a responsible debate over the future of the Supreme Court.

In fact, if the issue at hand was simply Kavanaugh’s qualifications to sit on the high court he should win the approval of every senator, regardless of party.

Kavanaugh boasts a sterling background, including service as a law clerk in a federal appeals court and the Supreme Court, an aide to Kenneth W. Starr’s Whitewater probe and a prominent White House official under President George W. Bush. He has served for 12 years on the federal appeals court in the nation’s capital – commonly known as the second most important in the nation.

Democrats fighting Kavanaugh’s nomination are doing so because he was nominated by a Republican president they bitterly oppose. But since they are the minority party in the Senate, Kavanaugh seems virtually certain to win confirmation.

The judge might even pick up a few votes from vulnerable Senate Democrats – such as Joe Manchin of West Virginia, Joe Donnelly of Indiana, and Heidi Heitkamp of North Dakota – who face difficult re-election campaigns in states carried by Trump in the 2016 presidential election.

More important than his resume is Kavanaugh’s understanding of the limited judicial role in society.

In his opening statement, Kavanaugh rejected the outcome-oriented approach to judging that seems popular among Democratic senators, emphasizing his nonpartisanship and fairness in judging cases.

But that’s not what Senate Democrats want to hear. The vast majority of them appear to want to see justices on the Supreme Court who support the Democratic political platform of abortion rights, socialized medical care, and other issues near and dear to the party’s left wing.

This is not the role of a Supreme Court justice, and Brett Kavanaugh knows this. If he joins the nation’s highest court we can be sure he will be an outstanding and fair justice.