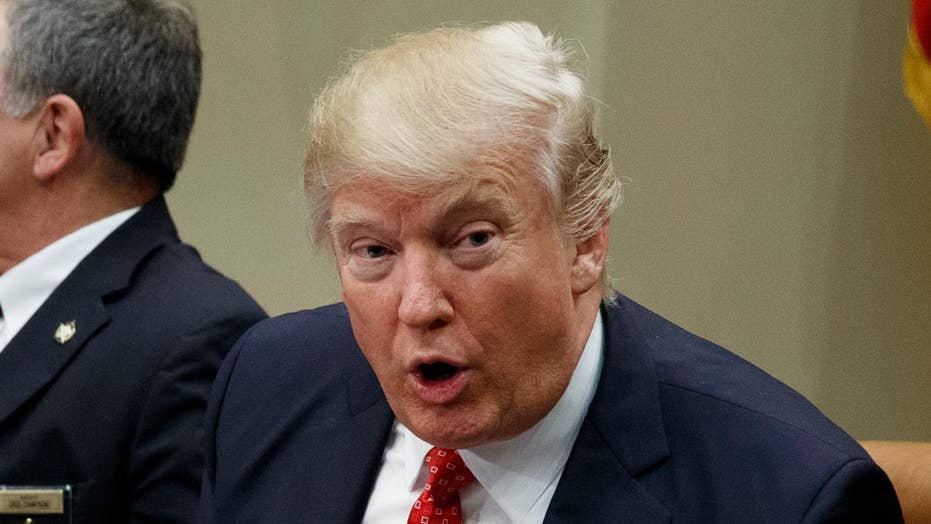 President pushes back at critics

It was a foolish mistake. But I slipped.

I read The New York Times.

This is bad for my health, because I get so mad at the smug socialist spin, but how can I not read it? It's my hometown paper. My wife wakes me up with indignant questions like, "How can you say government is too big? The Times says ... "

Wait a second. "Decades before"? They went back decades to criticize him? Actually, three decades -- to 1983, when as a young lawyer, Puzder represented a client whom the Labor Department accused of squandering union money.

The Times went on to say: "He has repeatedly argued that economic regulations stifle economic growth."

Puzder "argued" that? Regulations obviously stifle growth. That's their purpose -- to protect workers by putting limits on businesses' pursuit of profit. Regulation is a big reason this post-recession recovery has been so weak.

In just the last 10 years, the Department added regulations that require another 70 million hours of paperwork.

Oh, no! Trump will poison America with unsafe drugs!

President Trump hasn't actually made his FDA pick yet, but the Times worries "his push for deregulation might put consumers at risk."

The reporter cites thalidomide, which, 60 years ago, "caused severe birth defects in babies whose mothers had taken the drug in pregnancy. Since then, the F.D.A. has come to be viewed as the world's leading watchdog for protecting the safety of food and drugs, a gold standard ... "

Fool's gold. The FDA protected American babies from thalidomide not by being smart, but by being so slow. By the time thalidomide neared approval, its bad effects were visible in Europe.

The Times eagerly reports damage done by drugs: "Drug safety watchdogs point to examples like the painkiller Vioxx, which was withdrawn from the market ... "

But "invoking Vioxx as the icon for such looseness is itself ignorant looseness," says my medical researcher brother, Tom. "FDA approvals are tradeoffs between benefits and risks. The FDA knew about Vioxx's risks. It was the company, not the FDA, that withdrew the painkiller. Many doctors now say it was an ill-advised move that deprives patients of a good alternative. Vioxx's risks are no greater than painkillers like Motrin sold over the counter.

The Times avoids detailing just how onerous today's regulation is. The reporter says, "The agency sets a 10-month goal for approving standard drugs."

Gee, goals are nice, but does the agency honor them? The Times doesn't say. It also doesn't mention that the 10-month goal only applies to the final step of regulation -- after all trials are done. The entire process takes an average 16 years and $2.6 billion.

Americans want protection from bad drugs, but how many of us suffer needless pain, or die, while waiting those 16 years? How many die because a drug's developers cannot raise $2.6 billion?

No, he stopped a $9.25/month government subsidy for high-speed internet.

"He withdrew an effort to keep prison phone rates down," says the Times.

No, he stopped FCC lawyers from fighting about in-state phone calls because the FCC has no constitutional authority there.

Utterly reasonable. But the Times quotes an advocacy group saying, "Chairman Pai is showing his true stripes ... [doing] favors for the powerful corporations."

Please. Someone. Tell The New York Times that socialism was tried. It doesn't work.