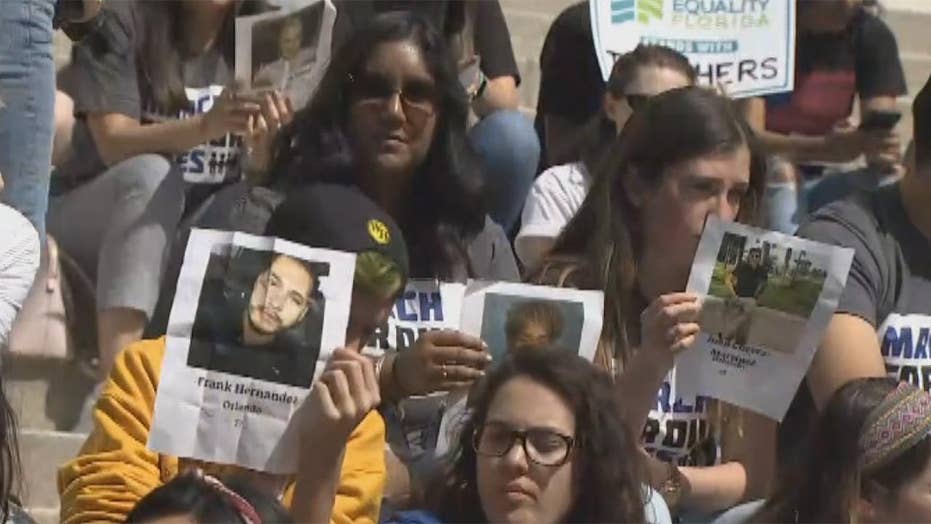 March for Our Lives makes the trip to Tallahassee to stop a bill that would allow some teachers in Florida to carry guns in the classroom.

Twenty years after Columbine High School shootings in Colorado, in which 12 students and one teacher were killed by two students who then committed suicide, Americans are still looking for what actions to take to stop mass public shootings.

The rest of the world, where mass public shootings are actually much more common, is also looking for solutions. Russia, France, Finland and Norway are among the European countries that have experienced far more deaths per capita than the U.S. from mass public shooting attacks.

Change is slowly coming across America. For example, a growing number of states and school districts are coming to the commonsense conclusion that we should not leave our children unprotected and defenseless in their schools.

Florida and Texas are both on the verge of enacting major improvements to their laws that will increase the number of teachers with guns who undergo firearms training to protect their students against attackers as a last line of defense.

With the strong support of the Republican governors and passage already by the state Senates in Florida and Texas, both bills are expected to become law in the next few weeks.

Florida’s bill removes a limitation that only allowed non-classroom-based staff (such as gym teachers, librarians and secretaries) to defend students.

We all hope and pray, of course, that our own children are never at the scene of a school shooting. But in the terrible eventuality that they are, we would all want them to come through the nightmare unhurt.

Texas’ legislation would remove the cap on the number of school personnel allowed to carry firearms at schools if authorized by local school boards. The bill would allow them to carry concealed firearms at all times in school, enabling them to react quickly if needed to protect students.

No school employee would be required to carry a gun in either state. Only volunteers would participate in the initiative designed to make schools more secure in the event of an armed attack.

We all hope and pray, of course, that our own children are never at the scene of a school shooting. But in the terrible eventuality that they are, we would all want them to come through the nightmare unhurt.

It isn’t by coincidence that all mass public shootings in Europe since at least 1990 – and many in other parts of the world – have occurred in areas where law-abiding citizens are banned from carrying firearms for protection.

Moms Demand Action, a gun-control advocacy group funded by former New York City Mayor Michael Bloomberg, argues that the bills in Texas and Florida “would make school a much more dangerous place for our children.”

By contrast, President Trump has proposed arming teachers and staff at schools, saying: “I’m telling you that would work.”

Currently, 20 states allow teachers and other school staff members to carry guns under a variety of rules on school property, so we don’t need to guess about how safe these schools are. Some states have had these rules for decades.

The Crime Prevention Research Center, of which I am the president, has just released a report looking at school shootings of all types in the United States from 2000 through 2018.

Our study found that during these 18 years Utah, New Hampshire, Rhode Island and parts of Oregon allowed all permitted teachers and staff to carry guns without any additional training requirements. Other states leave it to the discretion of the local superintendent or school board.

Roughly 5 percent of Utah teachers carry permitted concealed handguns at schools across the entire state, according to Clark Aposhian, the senior member of Utah's Concealed Firearm Review Board.

Support staff – including janitors, librarians, secretaries and lunch staff – carry firearms at a higher estimated rate of between 10 and 12 percent.

Carrying a gun in a school is no different than being armed in a grocery store, movie theater, or restaurant.

Some 17 million Americans have concealed handgun permits, amounting to 8.5 percent of the adult population outside of permit-unfriendly California and New York. Nobody knows whether the person next to them might have a gun, except in the rare cases it is needed.

We found 306 cases of gunshots on school property, 48 of which were suicides. Not counting suicides, 193 people died and 267 were injured in these incidents. Four cases were simply instances of accidental gunshots by police officers.

The rate of shootings and people killed by them has increased significantly since 2000. The yearly average number of people who died between 2001 and 2008 versus 2009 and 2018 has doubled (regardless of whether one excludes gang fights and suicides).

This increase has occurred entirely among schools that don’t let teachers carry guns. Outside of suicides or gang violence in the wee hours of the morning, there has yet to be a single case of someone being wounded or killed from a shooting when armed teachers are around.

There haven't been any serious accidents. No student has ever got hold of his or her teacher’s gun. And the one accidental firearms discharge by a teacher occurred outside of school hours. The teacher had only very minor injuries.

School insurance premiums haven‘t risen at all as a result of teachers being allowed to carry firearms.

“From what I’ve seen in Utah, (school insurance) rates have not gone up because of guns being allowed,” said Curt Oda, former president of the Utah Association of Independent Insurance Agents.  Nor has a survey of six other states shown any increase in insurance costs.

Police are important, but they can't be everywhere at once. Even if an officer is stationed at the school, mass public shooters are most likely to target the officer first. We’ve seen this time and again at malls, nightclubs and schools.

Allowing school employees to carry concealed guns also makes the job of the police much safer. Concealed carry means that killers won't know who is armed. Even if they take an officer by surprise, they must worry that they are revealing their position to someone else who can stop them.

Gun control groups may paint fearful pictures of what might go wrong with teachers carrying guns, but that fear gets harder to push given these programs’ successes.

This research provides evidence that armed teachers and other school employees deter attacks. It is past time for us to do something that really works. Let’s stop leaving our children defenseless in school and enable school employees to give them the protection they need and deserve.