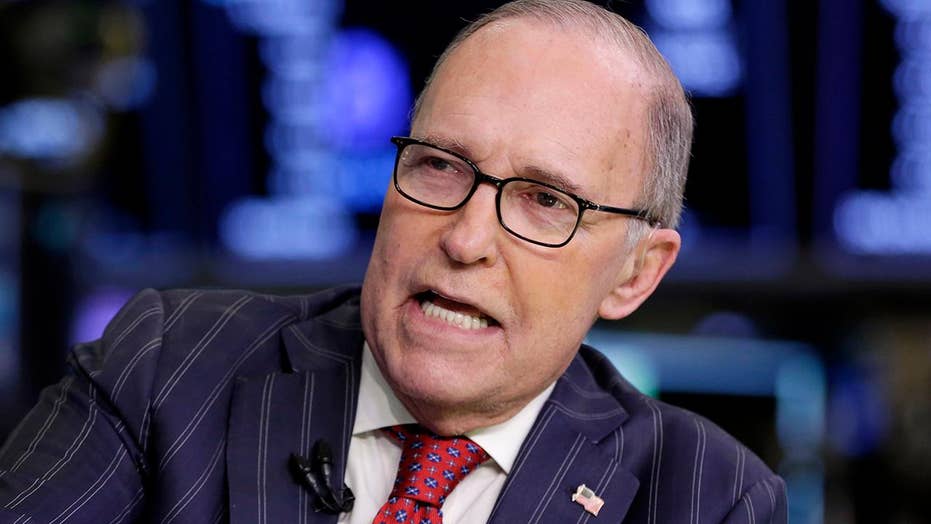 The economy has responded well to the tax cuts that became law in January. Growth is up, as is take-home pay. But there was a glaring omission in the tax bill that President Trump signed into law: there was no cut in the capital gains tax rates that act as a brake on more jobs and investment.

President Trump’s appointment Wednesday of supply-side economist Larry Kudlow as head of the National Economic Council could change that. There is no more passionate advocate of having the president issue an executive order to index capital gains for inflation. Unlocking frozen assets and stimulating investment, such a move would further turbocharge the U.S. economy.

President Trump clearly wants to cut taxes again. He recently told an audience in the White House Rose Garden that “we’re going to do a phase two” tax cut. White House aides tell me he is considering taking matters into his own hands with a capital gains tax cut that wouldn’t require a tortuous months-long legislative process.

Eliminating the tax on inflationary capital gains makes sense on the grounds of both growth and fairness. Back in the 1980s, President Reagan included in his tax reform the indexing of much of the federal tax code for inflation, so wage earners wouldn’t be automatically bumped into higher tax brackets.

President Trump speaks in St. Louis, Missouri at a roundtable with business leaders, addressing the tax cuts he has made and the beginning of phase two of his tax reform plan.

Larry Kudlow was then the deputy director of the Office of Management and Budget in the Reagan administration. He notes that the horse-trading that led to the omission of capital gains indexation from the Reagan program “has bedeviled economists who consider it bad policy to levy a tax on inflationary gains.”

Kudlow laid out an example of what he meant in a CNBC column last August: “You invest $1,000 and, after ten years, you sell that investment for $1,200. But if inflation averaged 2.5 percent in that period, the $1,200 you receive will be worth less in real terms than the $1,000 you invested. And yet, under current law, you will pay a tax on your $200 capital gain.”

In other words, the capital gains tax paid on such investments can easily exceed 100 percent once inflation is factored in.

In his CNBC column, Kudlow noted that former Treasury Department economist Gary Robbins has calculated that about one-fourth of capital gains revenue stems from taxing inflationary gains. Indexing all parts of the tax code to inflation would end that disparity, while also unleashing economic growth.

Kudlow quoted Robbins’ prediction that indexing capital gains for inflation starting last year would, by 2025, create an additional 400,000 jobs and boost our gross domestic product by roughly $500 billion. That would translate into an additional $3,600 for the average American household.

David McIntosh, the president of the free market Club for Growth, notes that much of the benefits of indexing capital gains would flow to working and retired Americans who would see their 401ks, IRAs, mutual funds and brokerage accounts prosper.

McIntosh, a former Republican congressman from Indiana, says that key White House players have recognized the pro-growth elements of such a move. He notes that his successor in Congress was Mike Pence, now the vice president, who introduced a bill to index capital gains for assets held for more than three years. One of the co-sponsors of the Pence bill was Mick Mulvaney, the current head of President Trump’s Office of Management and Budget.

There have been countless attempts since the Reagan years to get Congress to index capital gains. The GOP Congress sent President Clinton a legislative solution back in 1995, only to see it vetoed by him as “a tax cut for the rich.”

Prior to that, President George H.W. Bush was stymied in his efforts to get capital gains reform by a Democratic Senate. Boyden Gray, President Bush’s White House legal counsel, told me that the president had extensive research done into whether he could fix the problem through an executive order.

“We were all set to do it in 1991, and it would have dramatically accelerated economic activity and venture capital formation,” Gray told me this week.

At the last minute, objections were raised by Justice Department lawyers who questioned if President Bush had the legal authority to reinterpret the section of the Internal Revenue Service Code covering the definition of the word “cost.”

Gray notes that Congress has never specifically mandated that "cost" must be determined without regard to inflation, but in an abundance of caution the Bush administration abandoned plans for an executive order.

Since then, the legal case for the president’s authority to act has grown. Charles Cooper, who headed the Justice Department’s Office of Legal Counsel under President Regan, and attorney Vincent Colatriano wrote in 2012 in the Harvard Journal of Law & Public Policy that "jurisprudential developments over the last two decades have confirmed ... that Treasury has regulatory authority to index capital gains for inflation."

Cooper and Colatriano cited several cases. In Verizon v. FCC the Supreme Court affirmed in 2002 that the term “cost” was ambiguous and that the use of historical cost – the difference between the sale price of the asset and the cost of the asset – was not required by law.

A 2005 case affirmed the right of a federal agency to interpret an ambiguous provision of the law, while a 2011 case made clear that Treasury Department regulations could be interpreted in this way.

Kudlow knows all of these arguments backwards and forwards – economic, legal and moral – which is why he enthusiastically supports a Trump executive order on capital gains. In a TV interview Wednesday he repeated his backing for indexing capital gains without mentioning any executive order. But no one doubts that’s the direction he wants to go.

Ryan Ellis, the former director of federal tax policy for Americans for Tax Reform, said Kudlow understands that “now is the time, and now is the moment” for President Trump to act.

Lots of people thought that President Trump was done with his pro-growth economic agenda for the rest of 2018 after passage of the tax bill last December. But both the president’s recent statement on “phase two” and his appointment of Kudlow are clear signals signs that we ain’t seen nothing yet.