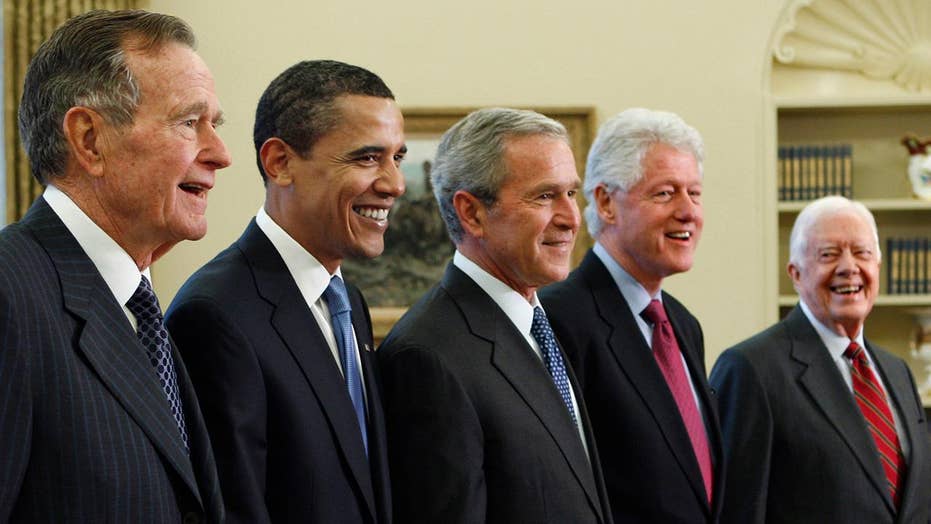 President Bush refused to discuss his legacy, but said that he would look down from heaven to see how historians judged his administration; reaction from syndicated talk show host and Writer Steve Gruber.

The death of former President George H.W. Bush at age 94 Friday closes out the remarkable life of a public servant who over a 50-year-span did everything from bravely tangling with Japanese planes in World War II to successfully managing the end of the Cold War.

But George H.W. Bush was also our most recent president to serve only one term. Despite a largely successful first term he lost a bruising re-election battle against Bill Clinton in 1992. Having won 40 states in a landslide victory in 1988, Bush only won 18 states in 1992 as his fellow Texan Ross Perot poached the votes of millions of independents and disillusioned conservatives. How could that have happened?

Many factors went into Bush’s defeat. A misdiagnosed glandular condition sapped him of energy and may have contributed to what was a haphazard and listless re-election campaign. The economy slipped into recession after he won the first Iraq War in 1990, and media bias obscured the fact it was in recovery when voters went to the polls.

But author Jon Meacham’s 2015 biography of George H.W. Bush – written with the former president’s complete cooperation – focuses on another factor.  In 1990, a year and a half into his presidency, Bush made an infamous reversal of his “Read My Lips, No New Taxes” pledge – a vow that went a long way to convincing voters he would follow the same course as his predecessor Ronald Reagan had.

Meacham called Bush’s retreat on taxes a Machiavellian maneuver. He told National Public Radio: “He thought if he were to take positions that he might not particularly feel strongly about in order to amass power, that was not cynical but instrumental.” But in a post-Watergate, post-Vietnam political environment Bush didn’t realize that cynical voters wouldn’t be as forgiving as previous electorates had been. Millions of Republicans and fiscal conservatives abandoned Bush for Ross Perot, costing Bush the White House. “It did destroy me,” Bush admitted to Meacham as he assessed the damage breaking his campaign pledge had created.

What Bush does make clear in his diary entries is that – like his first patron, Richard Nixon – he was far more interested in foreign than in domestic affairs.  Even before Saddam Hussein’s invasion of Kuwait in August 1990, Bush wrote in his diary: “I like wrestling with the foreign policy agenda. I don’t like the negotiations on the budget.”

After Saddam’s invasion – which came five weeks after the tax pledge was violated in the budget talks with Democrats at Andrews Air Force Base – Bush was stuck getting an unpopular budget deal through Congress at the same time he was planning to oust the Iraqi dictator from Kuwait.

“It did destroy me,” Bush admitted to Meacham as he assessed the damage breaking his campaign tax pledge had created.

Newt Gingrich, who was leading the GOP rebels in the House fighting the Bush tax increases, told Meacham he offered Bush an alternative strategy. He suggested Bush should suspend the budget negotiations and go to the country in the mid-term elections of November 1990 offering voters a choice. If they voted Republican they were against breaking the tax pledge and for spending restraint instead. If they voted Democratic, he would proceed with the budget blueprint.

But Bush rejected Gingrich’s idea, saying he wasn’t interested in pursuing political gamesmanship. Gingrich believed that decision helped cost Bush his 1992 re-election bid, in which he suffered the worst drop a presidential candidate has from one election to the next since Herbert Hoover. Bush won 54 percent of the vote in 1988. In 1992, with Ross Perot splitting the fiscal conservative vote, he won only 37 percent.

Grover Norquist, who designed the “no new taxes” pledge that Bush signed in 1988 as head of Americans for Tax Reform, says that while he respects Bush, he fundamentally misread the politics and economics of the times and the devastating impact that breaking the pledge would have on him.  He told me in a 2015 interview for National Review magazine:

“George H. W. Bush, like Nixon, acted as if the presidency was about foreign policy and not American economic power. Both damaged the economy by raising taxes and allowing regulations to run amok and that weakened their hand in foreign policy. Reagan understood the need to cut taxes and limit government to create a strong economy and then he had the power and political backing to win the Cold War.”

Bush responded to his critics by telling Meacham he had intended to honor the no-new-taxes pledge, but said that “when you’re faced with . . . the practical reality, of shutting down the government or dealing with a hostile Congress, you get something done.” But millions of people decided Bush hadn’t tried hard to enough to fight the “hostile Congress” and punished him for that.

George H.W. Bush was a good man and an admirable patriot. But when it came to breaking his “Read My Lips” pledge the real political gamesmanship involved was in breaking his promise to the American people. Sadly, he paid a steep price for that by – like Jimmy Carter – having his presidency cut short after only one term.