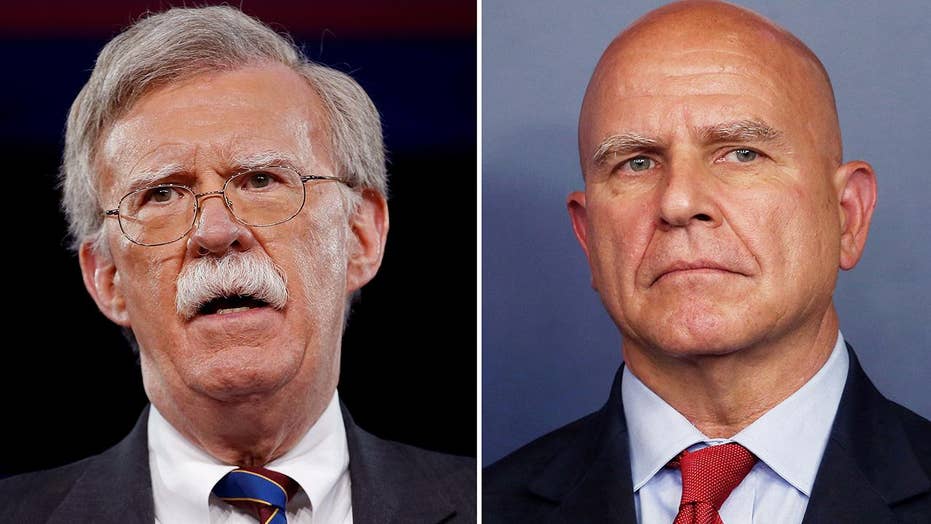 McMaster out, John Bolton in as National Security Adviser

No one can say for sure, and Bolton made clear in an interview on “The Story” on Fox News that he understands his role is to follow the policies set by the president. But Bolton’s long record in the spotlight in government and in many appearances as a contributor on Fox News give some clues and allow me to make some predications.

President Trump announced via Twitter Thursday night that Bolton was replacing McMaster. The move should not come as a shock. McMaster never seemed like a good fit in the world of Team Trump.

On five key issues, here is what I predict Bolton will advocate in the White House once he replaces McMaster:

Bolton has pushed privately and on Fox News for a tough stance against North Korean dictator Kim Jong Un and his Communist regime. Last fall, Bolton argued that the U.S. should not rule out the use of military force against the North if Kim refused to give up his nuclear weapons, or if China refused to join the U.S. in pressuring Kim to do so.

In recent days, the former ambassador has taken a more balanced approach, backing the president’s move to open negotiations with the Kim regime. But Pyongyang should take no solace in Bolton’s most recent comments.

If North Korea demands any sort of bribe for the simple pleasure of sitting down with the U.S., South Korea or Japan, expect Bolton to push for the ending those talks – and fast.

Also, Bolton will likely take a very tough line on any negotiations with the North – if such talks even happen. Look for him to demand some sort of concrete statement from the North that it intends to denuclearize in a predetermined timeframe that is verifiable.

Bolton will not allow President Trump to walk into any sort of trap if the president meets with Kim. Instead, Bolton will make sure there are predetermined deliverables before Trump even thinks about getting on Air Force One for a summit with Kim. No deliverables mean no summit will take place.

What Bolton will not allow is for Kim to get the photo op of a lifetime standing with the president of the United States, plaster it on every billboard in North Korea, and then walk away with the legitimacy and recognition he seeks from the most powerful nation on Earth without doing anything in return.

The incoming national security adviser has been a tough critic of the Obama administration’s past efforts that failed to hold to account a rising China that has been on a decades-long quest to dominate Asia.

Bolton will enthusiastically support President Trump’s decision to hit China with tariffs, announced Thursday. He will also support crucial allies and partners in their disputes with Beijing in the East and South China Seas, and make sure Taiwan’s democracy is never tampered with by China.

Bolton’s appointment as a key adviser to President Trump might be Moscow’s worst nightmare. A staunch critic of Russia’s actions in recent years, Bolton will likely play a key role in making sure Russia’s hostile and aggressive moves do not go unchallenged.

In fact, here is where some fresh blood could result in some dramatic changes in policy. Look for Bolton to push President Trump to press Moscow in Syria, Ukraine and over its often-overlooked help to North Korea.

I would also not be shocked if Bolton recommended increased arms sales to Ukraine, as well as pressing Moscow to end its troublemaking in Syria – perhaps by increasing America’s role in that war-torn nation if necessary.

With Bolton’s appointment, the nuclear deal with Iran is dead and buried. Period.

Bolton has been one of the toughest critics of a deal designed to temporarily keep Iran from becoming a nuclear power. Look for him to urge the president to kill this agreement – not seek any sort of replacement or even push for the resumption of tough sanctions to weaken Iran’s ability to spread trouble around the region.

Bolton will do all he can to prevent a nightmare scenario: a nuclear-armed Iran that could hit Israel, Europe or even someday the U.S. homeland with enough force to kill millions of people.

The biggest question of all is: How will Bolton mesh with an unpredictable and unconventional president who is prone to make snap decisions and think on his feet – many times to the angst of his own top advisers?

This is where Bolton’s experience and working in the top tiers of foreign policy decision-making will serve him well. And considering the challenges around the world this administration faces – especially a tough summit with North Korea on the horizon by the end of May – those years of experience will be needed and tested early and often.