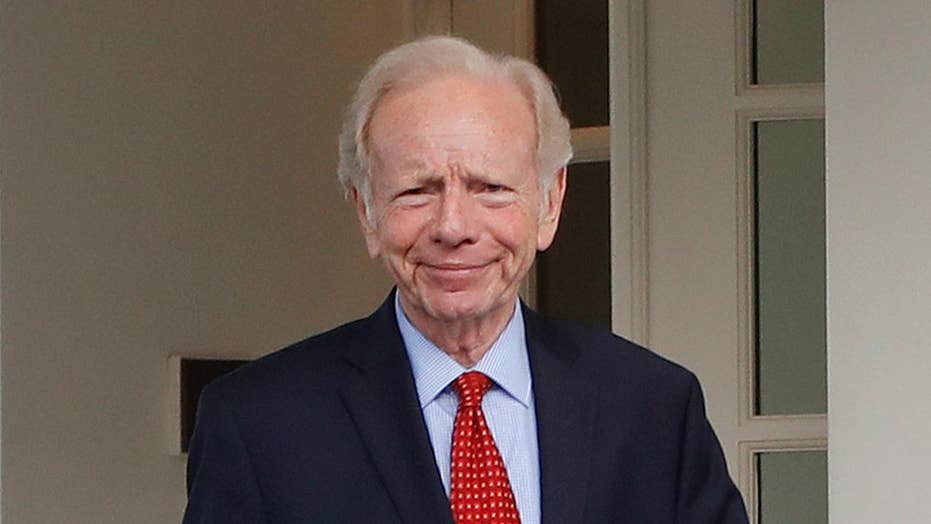 WH source: Lieberman out of the running for FBI director

Former Connecticut Senator Joseph I. Lieberman has been my friend for more than 40 years, going back to the days when we changed diapers together when our now oldest children were newborns.  He is the godfather of my oldest son.  That is my full disclosure.  But this column is about facts, facts, facts as to why Joe Lieberman’s withdrawal from consideration as FBI director is a shame.

I understand the senator withdrew because he saw the appearance of a conflict since he currently serves as Senior Counsel to the law firm in which one of the top attorneys, Marc Kasowitz, is representing and advising President Trump.

But there are also reports on the Internet grapevine that there was opposition to Lieberman among progressive Democrats who were unhappy with some of Lieberman's past positions. And some senators and others have raised questions about Lieberman's qualifications i.e., that a "politician" shouldn't be FBI director. (This is somewhat ironic since most senators did not object to Rep. Mike Pompeo becoming head of the CIA or former Sen. Dan Coates becoming Director of National Intelligence.)

Let's start with the issue of Lieberman’s track record as a progressive Democrat. The facts speak for themselves.  I remember Joe Lieberman at Yale when I was a freshman in the fall of 1963 and, then, Joe Lieberman was the distinguished Chairman of the Yale Daily News – but he was reporting from some dangerous places in Mississippi at the time, working with civil rights workers registering African Americans to vote and protecting their civil rights.

When Lieberman served as Connecticut’s U.S. senator for 24 years, he voted on the progressive side of the most important issues of the last four decades:  pro-civil rights, gay/LGBT rights, human rights, women’s rights, tough environmental-protection laws and regulations, tough measures on climate change and renewable energy, pro-labor, pro-minimum wage, pro-Affordable Care Act, anti-tax cuts for the wealthy, pro-choice, pro-gun control…what have I missed?

Yes, there are some exceptions that angered some progressives. For example, he voted for and supported the Iraq War, hoping that a small “d” democratic Iraq would be a force for peace in the Middle East and elsewhere. I disagreed with him on that one – as I did when he endorsed his good friend, Sen. John McCain (R-Ariz.), in the 2008 presidential race.  (I would add I considered John McCain then and now as a truly great American and hero).  I also appreciated Lieberman's support for Hillary Clinton in 2016 over Donald Trump and for his early support for Bill Clinton in 1991.

If it is true what I have read that some progressive Democrats opposed Lieberman becoming FBI Director because they can't forgive some of the few instances with which they disagree with his positions in the past, I say to them, respectfully – that level of intolerance strikes me as decidedly non-progressive.

As far as the arguments that Joe Lieberman was not “qualified” because he served as a United States senator for years and that makes him a “politician,” my answer is:  Seriously?

Lieberman served as attorney general of Connecticut for six years, leading law enforcement primarily in the areas of antitrust, environmental enforcement actions, consumer fraud and much more. He chaired the Senate Homeland Security and Government Affairs Committee and was a leader in almost every major counter-terrorism legislation since 9/11, especially as a lead sponsor of the Intelligence Reform and Terrorism Prevention Act, implementing most of the recommendations of the 9/11 Commission.

On the appearance of a conflict of interest issue, Lieberman chose to adhere to an even higher standard by not risking any questions about appearances if he was appointed FBI director by President Trump, considering his relationship with the Kasowitz law firm.

So, there it is:  A good man, a great public servant, someone who would have given leadership and integrity and independence to the FBI at a time of its great challenge, will not be the next FBI director.

How sad.  Sad for the FBI. Sad for our country.

But Joe Lieberman, my friend, is still a national treasure -- a man of integrity and character who, I hope, will find other ways to do public service, as he has for decades, for the public good.