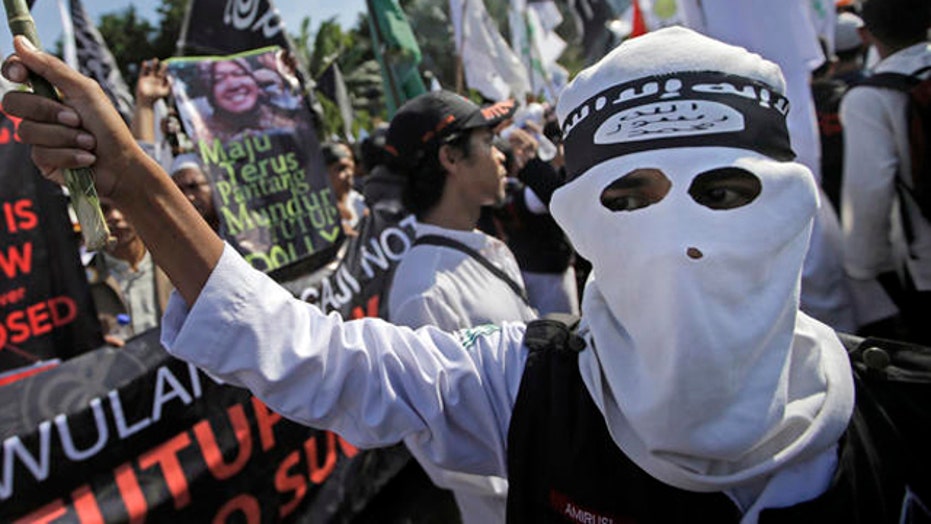 Threat from ISIS growing as more terror groups sign on

It’s the Obama administration’s latest -- and lamest -- attempt at some sort of strategy to combat ISIS and the rising tide of Islamic jihadism that is literally sweeping the four corners of the globe.

In blaming the rise of ISIS on economic woes and substandard social conditions in the Muslim world, President Obama has truly entered the Twilight Zone.

According to President Obama and other administration officials, ISIS has been empowered because Muslims around the world lack economic opportunities. And until these “legitimate grievances”—as the president recently put it—are addressed, Islamic terrorism will continue to grow and ISIS will gain new followers.

In blaming the rise of ISIS on economic woes and substandard social conditions in the Muslim world, President Obama has truly entered the Twilight Zone.

In blaming the rise of ISIS on economic woes and substandard social conditions in the Muslim world, President Obama has truly entered the Twilight Zone. Indeed, far from being a downtrodden group of illiterate misfits, ISIS jihadists comprise arguably the most well-off, highly educated and cosmopolitan terrorist movement in history—thanks mainly to the thousands of Western recruits who have eagerly flocked to Syria and Iraq to join its new caliphate.

In my latest book, "ISIS Exposed: Beheadings, Slavery, and the Hellish Reality of Radical Islam," I detail how scores of radicalized American and European Muslims have left -- or attempted to leave -- their comfortable, middle-class, often suburban existences behind and relocate to the Islamic State. Their desire to live under ISIS’s brutal rule has nothing to do with lack of career opportunities or fair housing and everything to do with ideology.

Take the case of Mujahidah Bint Usama, one of dozens of British women who have left the U.K. to start a new life inside the caliphate. Usama, a medical student, posted pictures of herself on Twitter wearing a white doctor’s jacket and proudly holding up a severed head as a group of young Syrian children looked on, wide-eyed.

The U.K., incidentally, seems to have the doctors-for-ISIS market cornered. Usama has been joined in ISIS by another British medical student, Nasser Muthana, and a former National Health Service doctor named Shajul Islam. All three left behind potentially prosperous careers to join the most sadistic terrorist movement in memory. But their decision should come as no surprise.

For instance, Mohammed Emwazi, better known as “Jihadi John,” was a “model student” at London’s University of Westminster, studying business management before embarking on a new career as the masked executioner in a string of ISIS beheading videos.

Likewise, the ISIS support network in Great Britain boasts no shortage of accomplished individuals. Anjem Choudary, Britain’s most notorious and outspoken radical Islamist, is a former medical student and lawyer who previously worked as a solicitor.

Then there is Anthony Small -- a disciple of Choudary’s who has publicly defended Jihadi John’s beheading of American photojournalist James Foley. Prior to his current role of championing jihad, Small was a British light middleweight boxing champion and a well-known public figure thanks to his athletic accomplishments.

Yet Small isn’t the only celebrity ISIS supporter. A pair of popular European rappers have gone from merely supporting the Islamic State to actually joining it as foot soldiers. German rapper Denis Mamadou Cuspert, who went by the stage name “Deso Dogg,” recorded three hit albums and toured with American hip-hop star DMX before converting to Islam and turning up in Syria with ISIS. He’s been joined there by British rapper Abdel-Majed Abdel Bary, who made the move from hip-hoppin’ to head-choppin’ after previously performing under the stage name, “L-Jinny.”

Back on this side of the Atlantic, of the estimated 150 U.S. citizens who have joined, or attempted to join, ISIS, Shannon Conley stands out. Conley, who grew up in a middle-class family in suburban Denver, was recently sentenced to four years in federal prison for attempting to travel to Syria and marry an ISIS fighter at the tender age of nineteen.

Why was Conley, like fellow U.S. citizen Ahmad Abousamra—an affluent, former Dean’s List student at Northeastern University who is now suspected of running ISIS’s social media operation from Syria -- drawn to the dark world of ISIS? And why have the Twin Cities of Minneapolis and Saint Paul  -- located in a prosperous state with a high quality of living—become America’s number one terrorist breeding ground, with dozens of residents traveling overseas to join terror groups like ISIS in recent years? They certainly weren’t driven into jihad by poverty.

Even before ISIS emerged onto the world scene, the tired “poverty causes terrorism” canard had been roundly discredited (before being resurrected by the Obama administration). Whether it was Usama bin Laden and his multi-millionaire family, or current Al Qaeda kingpin Ayman al-Zawahiri—a medical doctor who enjoyed a privileged upbringing in Egypt—or the numerous Hamas and Muslim Brotherhood leaders with advanced degrees, the world’s most prominent jihadist leaders had proven neither poor nor uneducated. Actually, they were quite the opposite.

As the rise of ISIS proves yet again, poverty does not cause terrorism—ideology does. While impoverished people have committed and will continue to commit acts of terrorism, their actions—just like those of Usama bin Laden, Ahmad Abousamra and other wealthy Islamic terrorists—are ultimately motivated by an ideological commitment to violent jihad.

With FBI Director James Comey recently testifying that ISIS-related investigations are now underway in all 50 U.S. states, the Obama administration would be well-advised to reverse its disastrous course and acknowledge that fact.