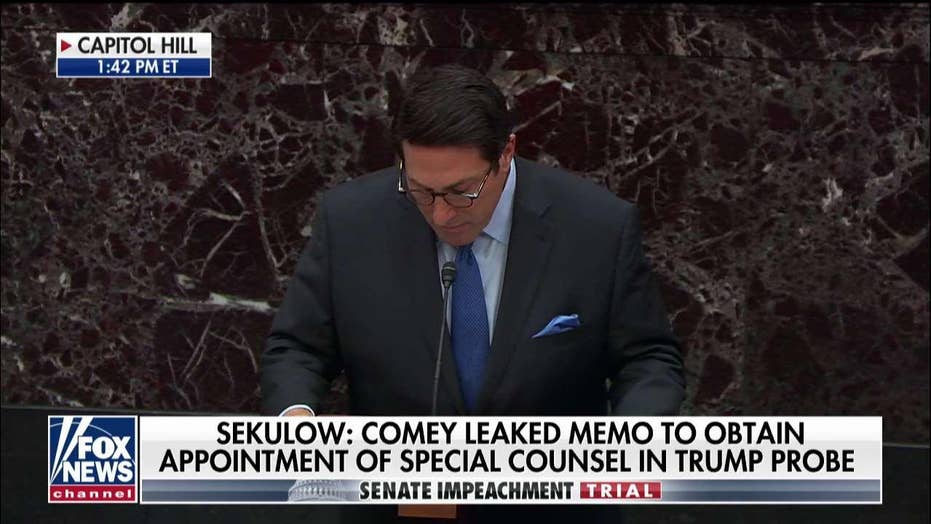 Jay Sekulow at impeachment trial: You're being asked to remove a president in an election year

As soon as House Democrats adopted two articles of impeachment against President Trump Dec. 18, they started making demands about how the Republican-controlled Senate should conduct the president’s impeachment trial.

Should they fail to get enough Republican support for witnesses, Democrats are trying to find another way to call witnesses in the impeachment trial.

The latest creative attempt is the claim that because, pursuant to the Constitution, Chief Justice John Roberts is presiding over the trial, he can unilaterally call witnesses. If this is true, House impeachment managers could bypass the Senate to get what they want from Roberts, if the chief justice agreed with the Democratic position.

The most prominent airing of this argument so far is an op-ed in The New York Times by law professors Neal Katyal and Joshua Geltzer, and former Rep. Marvin “Mickey” Edwards, R-Okla.  They say that the Senate’s impeachment trial rules give Roberts the sole power to issue subpoenas.

The three-point to Rule V of the impeachment rules, which states: “The Presiding Officer shall have power to make and issue, by himself or by the Secretary of the Senate, all orders, mandates, writs, and precepts authorized by these rules or by the Senate, and to make and enforce any such other regulations and orders in the premises as the Senate may authorize or provide.”

These authors are brilliant and exhibit their creative side in their op-ed. But they are wrong.

First, what they try to find unwritten in Rule V is actually written in Rule VI, which gives the “power to compel the attendance of witnesses” to the “Senate,” not to the presiding officer.

The authors might respond that the power to compel witness attendance refers to the authority to enforce a subpoena, but not to issue it. If so, their response admits that their argument fails.

The Senate would obviously not go along with this, since Article 1, Section 3, Clause 6 of the Constitution states that the Senate has “the sole Power to try all Impeachments.”

Even if Katyal, Geltzer and Edwards’ reading of Rule V was correct, that rule would be unconstitutional and their argument would fail anyway.

We can only speculate that those making this argument resort to such gymnastics because they are not satisfied with the Constitution and the impeachment process it establishes. They apparently fear that the established process will not give them what they want, so they attempt to create a different process.

If the witnesses that Trump critics are demanding were all that critical to the House’s impeachment case, one would think that the House would have at least attempted to secure their testimony. Instead, the House issued subpoenas that no administration would honor and turned the inevitable refusal to comply into another impeachable offense.

The House could have sought to enforce its subpoenas, but it did not. Democrats simply claimed that Trump represented such an existential threat to the nation that impeachment had to be rushed. When House Speaker Nancy Pelosi, D-Calif., refused for a month to share the House’s work with the Senate she obviously left that existential claim in doubt.

The House cannot have it both ways. House Democrats cannot decline to take necessary steps to secure witness testimony and then demand that the Senate take seriously what the House did not.

It appears that neither Democrats nor their allies are interested in making serious arguments in favor of impeachment. They’re interested only in using the impeachment process to score political points that they can use against the president.

That sounds like trying to interfere in the next presidential election.