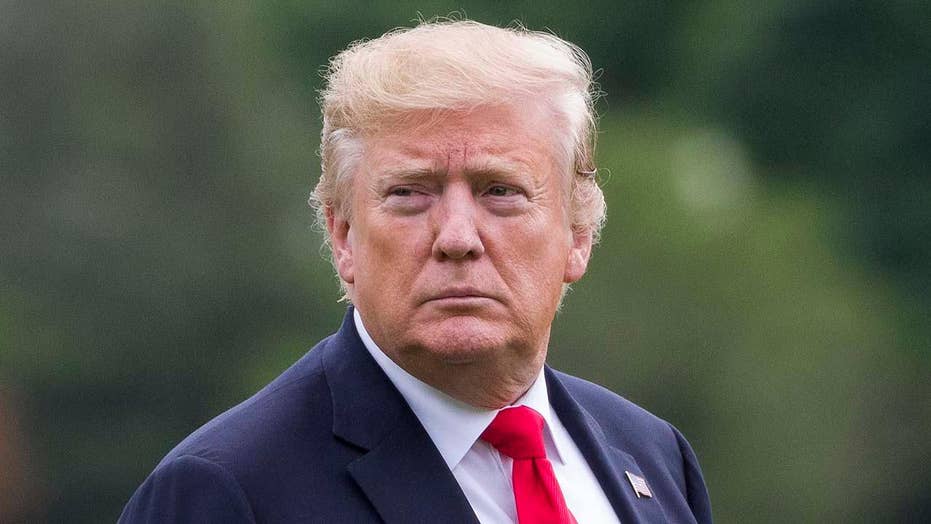 Trump says illegal immigrants will be removed at a later date

President Trump says that he will be building up 'removal forces'; Kevin Corke reports from the White House.

President Trump has announced a set of immigration reforms, many of which have merit. Even he acknowledges there’s little chance that Congress will act on them at least until after the 2020 elections. Yet the crisis at our border continues, as even House Speaker Nancy Pelosi now acknowledges.

But there’s also a crisis of trust – trust in our government’s ability to solve big challenges.

We feel this deeply: America is a nation of laws. It must have borders and it must enforce its laws impartially and consistently. We’re doing neither. And with every day the trust gap widens.

Do we trust that anyone in the federal government will really do something to address what is beyond question a broken immigration system? Finally, we don’t have to trust – we can see that President Trump has taken action.

We have a broken immigration system. Our borders are so porous that they encourage the greedy and cruel to take advantage of those seeking a better life. Human trafficking continues unabated and unchallenged. “Sanctuary cities” make a mockery of the rule of law.

We have a broken asylum system that can’t effectively distinguish between those fleeing real threats from those simply looking for better economic opportunities. And we have a broken guest worker program that leaves people frustrated at the border and in boardrooms.

These problems have been ongoing and festering for the better part of five decades. Thankfully, the administration has now courageously stepped into the morass and offered at least a partial guidepost for making real and lasting progress on the current crisis, as well as longstanding problems with our system.

We must start with the border. This is not simply a talking point. Securing the border, adequately policing our points of entry, erecting physical and virtual barriers, and obtaining operational control of who comes in and out of this country are prerequisites for any lasting future legal immigration reform.

The United States ought to know who is entering its borders, and for what purposes. A laughably insecure border only encourages the lawless drug cartels who are reaping billions of dollars from the new revenue stream of immigrants who wish to enter our country.

The United States ought to know who is entering its borders, and for what purposes. A laughably insecure border only encourages the lawless drug cartels who are reaping billions of dollars from the new revenue stream of immigrants who wish to enter our country.

The president’s proposal takes a strong step in the right direction by strengthening immigration and enforcement agencies, making the necessary investments along the southern border, and closing the loopholes that are exacerbating the humanitarian crisis.

It is encouraging to see the administration prioritize a workable system for asylum-seekers. We should offer America’s protection to those who are truly persecuted in their own homelands, but we must be able to determine that those threats are real – that the migrant isn’t simply reading from a script provided by traffickers or other bad-faith actors. Poverty is not a credible basis for asylum because America cannot house the world’s impoverished.

We must also recognize the important role immigration plays in our economy. American prosperity requires the industry and insight immigrants have always brought to America. President Trump’s proposal to grant more green cards based on merit, rather than family relationships, is a good idea. Nations like Australia and Canada have proven this works. As our economy becomes increasingly high-tech, we will need the highly skilled workers that a merit-based approach would provide.

And finally, we need a guest-worker program that ends the black market for labor. We can have an efficient system that helps industries – such as farming, service, and hospitality – find the workers they need while also broadly protecting American wages.

The government’s historical approach, de facto non-enforcement, is lawlessness – and lawlessness is, in fact, what millions are fleeing. It’s why they want to come to America. Why would we want to imitate that lawlessness here?

President Trump says his plan is “pro-American, pro-immigrant and pro-worker.” We should all be able to agree that those are worthy goals.

The crisis at the border is real, and so is the crisis of faith in our government. Our elected officials can address both, by keeping their promises, enforcing our laws and ultimately, securing the border, and reforming our immigration system.

President Trump has taken the first step. That’s how you rebuild trust – by action. Let’s see if Congress follows, or gets left behind by the American people.

Kevin Roberts is the Executive Director of the Texas Public Policy Foundation.