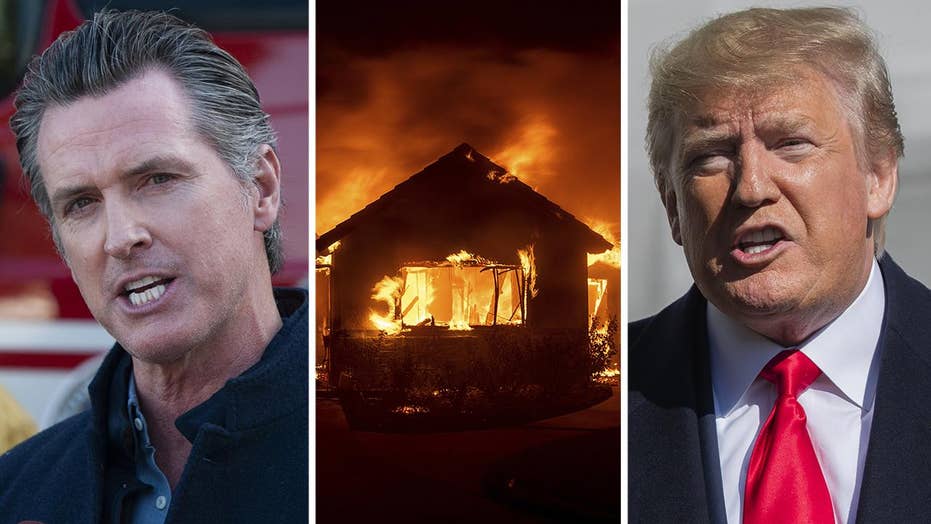 The president accuses California Gov. Gavin Newsom of doing a 'terrible' job of forest management while Newsom calls out Trump for not believing in climate change; William La Jeunesse reports.

California has a major wildfire problem. The Democratic Party’s response has been to push for tougher restrictions on greenhouse gas emissions, as though California could unilaterally and quickly change its weather to make the state cooler, wetter and less windy.

Former California Gov. Jerry Brown recently sounded the alarm about climate change creating wildfires: “This is only the beginning. This is only a taste of the horror and terror that will occur in decades.”

Blaming the recent fires on climate change is right out of an activist playbook. No matter the climate event, activists will assert that it is further evidence of manmade global warming. (To them, of course, the reverse is never true; if the country experiences a cold snap, no one is permitted to suggest it calls into question the extent of global warming.)

So, here we go again, with Democrats pushing for even more measures to restrict greenhouse gases in California. Last year, the state passed its most restrictive measure yet. A new law that requires that 50 percent of California's electricity be powered by renewable resources by 2025, 60 percent by 2030, and 100 percent by 2045. California already bans the use of coal for energy. Now there are calls for the elimination of natural gas, despite the fact that is cleaner than coal.

Berkeley has already banned it, and other cities, including Los Angeles, are considering it. Yes, Californians would have to replace their gas stoves and furnaces with electric ones, and replace their gas fireplaces with, well, since Los Angeles and many other California cities already prohibit new wood-burning fireplaces, it is not clear what could replace them. Perhaps they could use the fake fireplaces sold by K-Mart where flickering lights are made to look like flames?

The problem is that these policies have virtually no impact on California’s climate, and are likely to exacerbate the wildfire problem. Climate change is a global problem. California can reduce emissions all it wants, but it will not change the fact that countries such as China and India emit such gasses in greater and greater amounts.

The U.S. has been producing less air pollution, but smog levels are still rising in the West due to pollution from Asian countries drifting over the Pacific Ocean. “Scientists found Asian air pollution contributed as much as 65 percent of an increase in Western ozone in recent years,” according to one NPR report.

The obvious flaw in California’s strategy is in unilaterally implementing drastic and costly green initiatives without seeking or obtaining similar reductions from its Asian neighbors. California defends its policies by stating it is “leading by example.”

Has California Gov. Gavin Newsom never read “The Art of the Deal”? How well do you think President Trump’s trade negotiations would be going with China if his strategy was to eliminate all tariffs on products from China in hopes that China would “follow our example”?

In the meantime, California consumers gobble up Chinese-made products by the billions. Yep, the same products made with electricity generated by coal, which is polluting California’s air.

The other problem is that the state’s push for green energy is putting a huge economic and logistical strain on state electrical providers. It should be no surprise that they are now the biggest concern as the cause of wildfires. In 2017 and 2018, an estimated 30 wildfires were caused by electrical lines or transformers.

But for California’s expensive green energy mandates, these companies could have afforded to move power lines underground, or at least insulate them, and take efforts to keep trees and branches as far away from them as possible.

California’s mandates for electric vehicles, and preference for electricity over gas, also put a greater strain on electrical infrastructure.

To reduce wildfires, California should immediately improve its electric infrastructure, clear the brush, remove homeless encampments (the cause of 2,500 fires in Los Angeles alone last year), add firefighters, and improve the state’s antiquated response system. These are real solutions for a deadly, real-world problem facing Californians. But they have not been implemented because state leadership would prefer to use wildfires to further a progressive, green energy agenda.