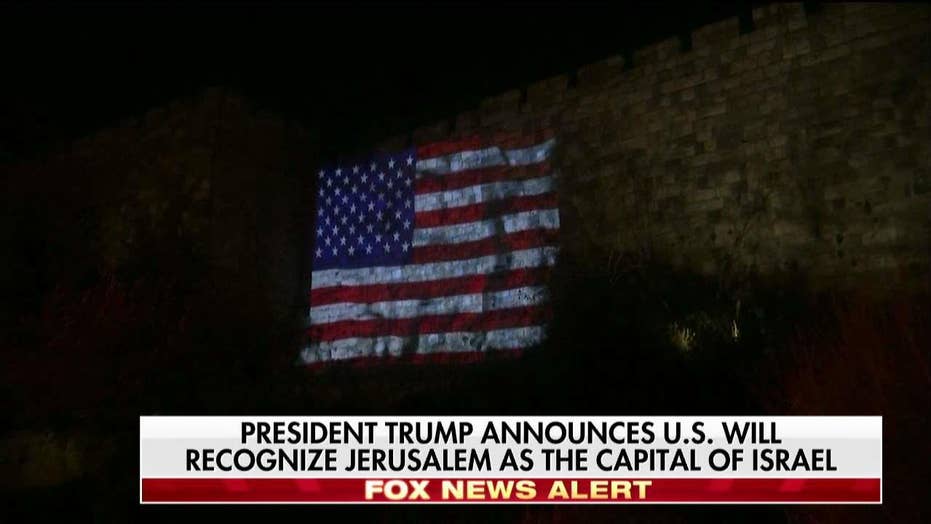 Fake news is a problem, but fake history is worse. And fake history has a lot to do with the troubles in the Middle East and the controversy surrounding Jerusalem as Israel’s capital.

President Trump announced Wednesday that the United States is formally recognizing Jerusalem as the capital of Israel and will therefore move the U.S. embassy from Tel Aviv to Jerusalem.

We were invited to participate in a conference call on this important decision hosted by White House Deputy Director and Special Assistant to the President Jennifer Korn on Wednesday afternoon. Ambassador David Satterfield, who is principal deputy assistant secretary of state in the Bureau of Near Eastern Affairs, discussed the implications of this decision and replied to a number of questions.

The controversy is stark. Not surprisingly CNN has posted columns promising that the president’s decision will cause “upheaval” and “dangerous reverberations.” The New York Times says Trump’s announcement “has drawn a storm of criticism from Arab and European leaders.”

And, predictably, various Palestinian groups, such as Hamas, are calling for protests and “three days of rage.”

Even Palestinian Christians burned pictures of President Trump in Bethlehem over implications from his announcement on Jerusalem.

President Trump has commented that his decision is“recognition of reality.” Well, of course it is. And it is recognition of history too.

The background briefing we were sent prior to the White House conference call makes it clear that the president and his team understand the importance of history – not the bogus narrative many on the left embrace.

We all know how the president feels about “fake news.” As it turns out, he doesn’t like “fake history” either. Peace in the Middle East will never happen if we keep lying about history.

Three important points – truthful history – need to be made.

First, the rejection of the Jewish State of Israel and the opposition to Israel’s claim of Jerusalem as the nation’s capital are based on fake history.

Key Islamic leaders have rewritten history, denying the historical existence of Israel. This is absurd. Finding peace in the Middle East is not helped refusing to tell the truth about the past.

The most egregious fake history revolves around the claim that there never was an ancient kingdom of Israel and that the Jewish people never had a temple in Jerusalem.

No trained historian and certainly no competent archaeologist agrees with such nonsense. Of course ancient Israel existed – and existed in the very place where modern Israel exists today.

But many Muslims and Muslim leaders simply refuse to accept the facts of history. Responsible world leaders need to call them out. We cannot talk peace if we keep lying about history.

Ron Dermer, Israel’s ambassador to the United States, recently spoke at the dedication service for the Museum of the Bible in Washington. We listened as he said the values of the Bible “gave us the strength to turn tragedy into triumph, restore our sovereignty and rebuild Jerusalem, the original DC – David’s Capital.”

Second, President Trump is on the right side of history.

By recognizing Jerusalem as Israel’s capital, President Trump is affirming the Jewish people’s history. He is also correcting a long-standing historical problem and a grievous injustice.

The president is doing nothing radical. His support for Israel is in step with the West’s support for the creation of the independent State of Israel in the aftermath of World War II and the Holocaust.

Refusing to do this, because of fear of what Muslim nations and Islamic terrorists might do, rewards terrorism. And it tacitly gives credence to false narratives and false maps of the world, on which “Israel” does not appear.

Denying Israel’s ancient history makes it easier for the anti-Semites and haters of Israel to oppose modern Israel’s claim to the land, including its historic capital city Jerusalem.

Many Jews and Christians offer theological arguments, citing biblical promises and prophecies about Israel being the home of the Jews. All of that is interesting, to be sure.

But the point that non-religious people should understand is that the Jewish people’s claim to the land that Israel now occupies is a historic claim based on facts – not simply a matter of faith.

The Jewish people have in fact lived in their land of Israel for more than 3.000 years and took possession of the city of Jerusalem itself almost exactly 3,000 years ago. They have lived there continuously, even though they have not always ruled over their own land.

Therefore, Israel’s legitimate claims to the land and to the city of Jerusalem itself should be accepted – regardless of your religious beliefs, or even if you have no belief whatsoever in any religion.

That, of course does not mean the Palestinians have no rights. They do. But no peace plan will succeed if and until Israel’s right to exist and its right to claim Jerusalem as its capital are universally acknowledged.

President Trump has taken the right step. People who know the real history – not a fake history – should support his decision.

Jeremiah J. Johnston, Ph.D., is president of Christian Thinkers Society, a Resident Institute at Houston Baptist University where he also serves at Associate Professor of Early Christianity. His latest book is "Unimaginable: What Our World would be Like Without Christianity."  You can listen to him regularly on his nationally syndicated radio program, The Jeremiah Johnston Show.