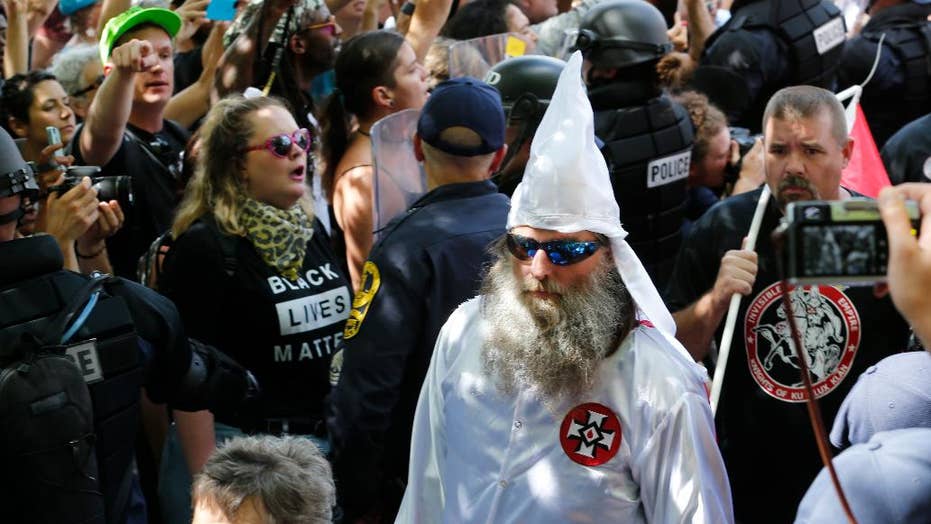 When images hit the web last Saturday night of white supremacist college students in Virginia carrying tiki torches in one hand and giving the Nazi salute with the other, Twitter and social media sleuths immediately went to work in attempting to identify members of the white shirt khaki mob.

Whether it be at a political rally or even a sporting event – or just about any public place anywhere – social media has pretty much all but assured that we are helpless to the power of becoming a viral moment, at any given moment, any time. But what if it doesn’t stop there?

Take all of those factors that can lead to misidentifying someone online and add a celebrity with millions of followers and fans into the mix, and you have a recipe for disaster.

The attempt to ID several members of the Alt-Right rally – including the suspect who rammed his vehicle into a group of protestors, killing 32-year-old Heather Heyer – has inevitably resulted in the misidentification and doxing of private citizens by amateur online sleuths at both Reddit and 4Chan, as well as by members of media.

Take all of those factors that can lead to misidentifying someone online and add a celebrity with millions of followers and fans into the mix, and you have a recipe for disaster.

That’s exactly what Jennifer Lawrence is doing. In a Facebook post directed at her 16,000,000 fans, Lawrence commanded: “These are the faces of hate. Look closely and post anyone you find,” and added, “You can't hide with the internet you pathetic cowards!”

Lawrence, one of the most recognizable, talented and powerful stars in Hollywood, is actively weaponizing her fame in what, on its face, may seem like a good cause – outing hate in America. She's also not alone in doing this.

There are two things wrong with this, though.

The first is, these guys aren’t exactly hiding. They are out in plain sight. They aren’t wearing hoods. They want the attention.

University of Nevada student Peter Cvjetanovic was identified in one of the more striking photographs shared from Saturday night’s backyard ti-k-k-k-i-fest. Since being id’ed, Cvjetanovic has given several interviews both in print and on television defending his beliefs.

“I did not expect the photo to be shared as much as it was. I understand the photo has a very negative connotation. But I hope that the people sharing the photo are willing to listen that I’m not the angry racist they see in that photo.” (Spoiler: He probably is.)

Media outlets are now lining up to interview Cvjetanovic in on-camera interviews where he is given a chance to spread his idiocy and intolerance far and wide.

Cvjetanovic and others like him aren’t an aggrieved class. They aren’t oppressed. They belong to a fractional culture and a group has told them they are in order to exploit their boredom and advance their own failed ideology. And to quote a great Nazi hunter “Business is ah-boomin” for them. They are getting exactly what they want. Attention. Nothing more. Good or bad, it doesn’t matter. Only that they have the platform.

The second problem with what Lawrence (and in fairness other celebrities with enormous social media microphones) is doing is the more dangerous and obvious one: organizing a digital mob with the power to misidentify people, to single out and punish the wrong people. There is almost no way for a private citizen, who could be misidentified by someone with Lawrence’s following, to fight back against this.

Kyle Quinn, an engineering professor in Arkansas, fell victim to such a mob this past weekend when he was mistaken for one of the men at the rally, thanks to one of the marchers wearing a T-shirt with “Arkansas” on it who bore a resemblance to him. His home address was posted and, fearing for their safety, Quinn and his wife evacuated their home to stay with a colleague.

“You have celebrities and hundreds of people doing no research online, not checking facts,” Quinn told the New York Times. “I’ve dedicated my life to helping all people, trying to improve health care and train the next generation of scientists, and this is potentially throwing a wrench in that.”

The Twitter account @yesyoureracist has made it its mission to publicly “out” and name those who attended the rallies this past weekend. In doing so, they have misidentified several people to their 370,000 Twitter followers. The account’s response is to simply say sorry, ask for more patron donations and move on. The innocent people on the other end, however, have to deal with days of threats, harassing phone calls to their employers and the fear that their private information might become public.

Shortly after the high-profile shooting death of Travyon Martin, director Spike Lee took to Twitter to blast out the home address that he thought belonged to George Zimmerman, the man who was accused (and later acquitted) in Martin’s death. The address was not Zimmerman’s, however. It belonged to a couple who were forced to vacate their home due to death threats. Lee later apologized profusely and settled with the couple out of court. Too late. Damage done.

As with other high profile cases of mistaken identity (Newtown shooter Adam Lanza and the Boston Bombing suspects) the rush to identify and dish out digital justice first can have devastating effects and perhaps even fatal ones. The absolute last thing a group of online blood-thirsty amateurs need is to be empowered by those with the largest platforms among us.

Calling out hate is one thing. Digital vigilantism dished out by celebrities like Lawrence where innocent people are bound to be targeted over no fault of their own is something completely different, and will only lead nowhere good.