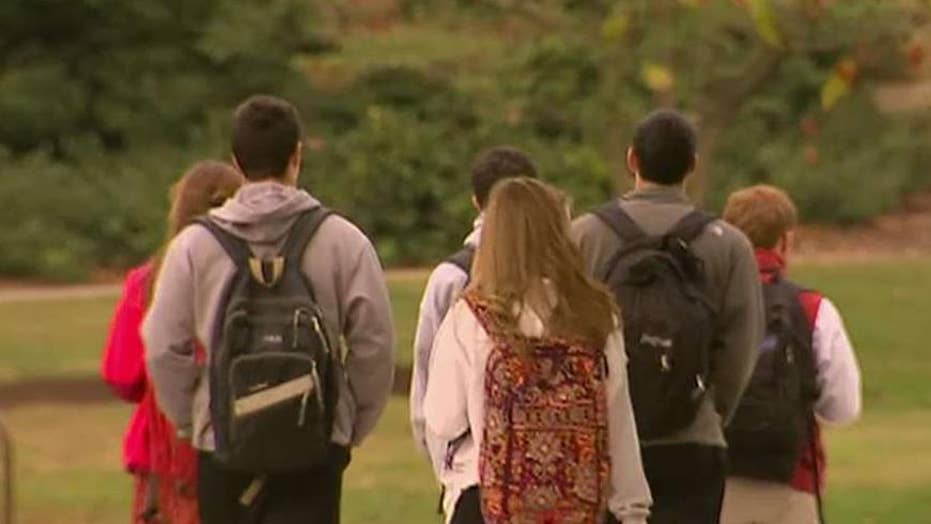 The president's plan to cut off aid to colleges that tolerate anti-Semitism has divided the Jewish community on Capitol Hill; Doug McKelway reports from the White House.

President Trump’s signing of an executive order Wednesday requiring colleges and universities to protect Jewish students from anti-Semitic discrimination or lose federal funds is further evidence that the president is a true friend of the Jewish people and the Jewish state of Israel.

﻿﻿From the time Donald Trump first ran for office – and then throughout my nearly three years working at the White House – I watched with surprise, then amazement and then dismay when some people made the outrageous claim that he is an anti-Semite. This is a vicious lie. Those who make such an utterly false claim do not know President Trump.

The executive order the president signed Wednesday recognizes Judaism as a nationality as well as a religion. This recognition will allow the federal government to act against anti-Semitism on college campuses under Title VI of the Civil Rights Act of 1964.

This Civil Rights Act allows the government to penalize colleges and universities that fail to combat discrimination against minority students – and now Jews are defined as a protected minority under the president’s executive order.

The president’s order will help protect Jewish students from a rise in anti-Semitism on campuses stoked by the Boycott, Divest and Sanctions (BDS) movement, which advocates isolating the Jewish state of Israel from the world. BDS has been embraced by anti-Semites as a vehicle to express their hatred of Jews with concrete action.

President Trump’s executive order provides very meaningful and needed protection to Jewish college students against anti-Semitic discrimination. Many college campuses around our great country have small groups of anti-Semites and Israel-bashing loudmouths who are given outsized media coverage and put Jewish students and those who support our cherished ally Israel in harm’s way and make them feel unwelcome.

Instead of targeting people who espouse such hatred and filth, there exists an army of talking heads, commentators and people ranting on Twitter who distort the truth and wrongfully attack a president who has steadfastly, time and time again, defended the Jewish people and the state of Israel throughout his presidency.

I am an observant Jew who worked for Donald Trump for 23 years. Only a very small group of people in the world have the deep experience that I do as a Jew who worked very closely for the man who now leads our country. Never once have I seen any evidence of anti-Semitism by him. He has always been tremendously respectful of me and my observance and of Judaism.

I have a message to all my Jewish brothers and sisters – and to all Americans who support Jews and the state of Israel: Despite our many differences of opinion on politics and policy that exist today, the time has come to unite to fight the real enemies of the Jewish people and Israel.

And the time has come as well to express gratitude, without equivocation, to those who fight tirelessly to protect the Jewish people and the state of Israel – including President Trump.

President Trump … is one of the greatest world leaders the Jewish people and Israel have ever had.

I am not writing this piece to convince anyone to agree with all of President Trump’s policies, his style of speaking, or his tweets. Thankfully, we live in a free country with diverse and robust opinions about all policies and how different people speak.

I am not asking you to agree with all that the president does and says. That would be unreasonable and unrealistic. But I am asking everyone to look at the many important actions taken by President Trump to raise awareness of anti-Semitism, to fight anti-Semitism, and to protect Israel.

We should not allow politically driven and agenda-driven individuals to falsely portray President Trump as an enemy. In fact, he is one of the greatest world leaders the Jewish people and Israel have ever had.

The executive order the president signed Wednesday is just his latest action in support of the Jewish people and Israel. He earlier recognized Jerusalem as Israel’s capital and moved the U.S. embassy there – something other presidents promised to do but never did. He also recognized Israeli sovereignty over the strategic Golan Heights.

In addition, the president has worked hard to end the decades-old conflict between Israel, the Palestinians and Israel’s Arab neighbors. And he has supported Israel in the United Nations against hostile and unjust resolutions.

Let us to band together to fight the many enemies of the Jewish people and Israel. The real ones. Those in hiding and those in plain sight. Those who spread hate on the Internet and on college campuses and those who physically attack and murder Jews. That’s the real danger to all Jews and to all Americans.

Let us learn that even if you have some criticism of the president or if you disagree with his policies or some of the things he says, nevertheless it is incumbent upon each of us to express gratitude when he takes action to protect us.

Let us learn not to distort the message or the messages of those who are our friends. And mostly, let us not turn a historic executive order that is designed to protect all our children – who deserve and are entitled to such protection – into something that it is not.

Let us reach across the aisle and unite in our fight against anti-Semitism and all forms of hatred – and let us target our real enemies together. It’s our only chance to fight and win against hate.