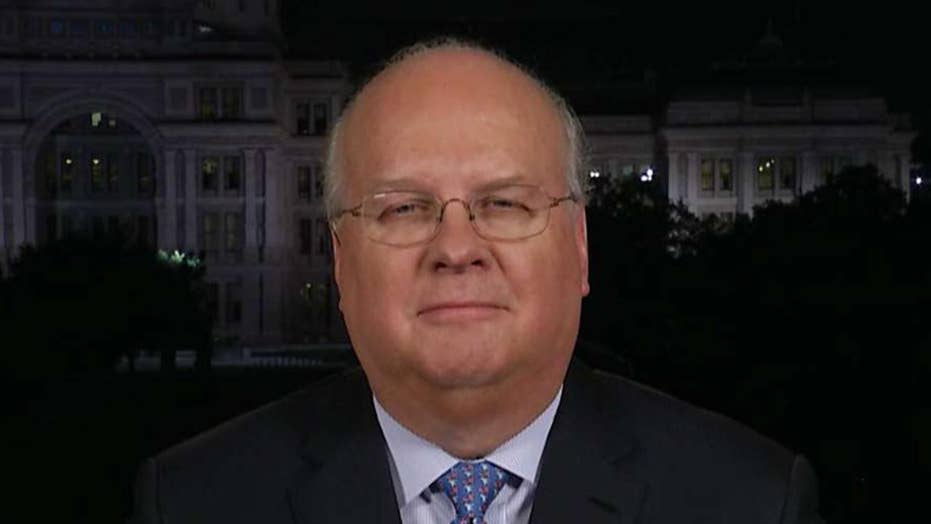 Karl Rove: It's going to months of Democrats demanding the unredacted Mueller report

Democrats parsing through the redacted report of Special Counsel Robert Mueller being released Thursday will be looking for any bit of information that might justify their fixation on a fruitless investigation. I'll be looking for something more important.

I want to know if political bias at the FBI drove the approach to Mueller’s investigation of whether Donald Trump or his campaign colluded with Russia to win the 2016 presidential election.

We already know that President Trump was telling the truth when he said repeatedly that “there was no collusion” – despite the erroneous belief by many in the media and many Democrats that the president was lying.

In his March 24 letter to members of Congress summarizing the Mueller report, Attorney General William Barr wrote: “The Special Counsel’s investigation did not find that the Trump campaign or anyone associated with it conspired or coordinated with Russia in its effort to influence the 2016 U.S. presidential election.”

We also know that Barr made a determination in the president’s favor regarding allegations that the president may have obstructed justice in the collusion investigation.

We already know that President Trump was telling the truth when he said repeatedly that “there was no collusion” – despite the erroneous belief by many in the media and many Democrats that the president was lying.

Barr wrote in his March 24 letter: “Deputy Attorney General Rod Rosenstein and I have concluded that the evidence developed during the Special Counsel’s investigation is not sufficient to establish that the President committed an obstruction-of-justice offense.”

Two things are not in doubt: that Russia tried to engage in manipulating our election, and that the top investigators of the collusion allegations expressed bias and animus towards Trump.

The question is, did that bias and animus result in an investigation that prioritized taking down Trump over taking down the Russians who tried to influence our elections?

The Mueller report on its own may not provide conclusive answers. Combining Mueller's findings with those of Justice Department Inspector General Michael Horowitz should prove much more illuminating.

Horowitz and his office have already done a deep dive into the FBI's handling of allegations against former Secretary of State Hillary Clinton, releasing a report last June that documented the very real bias and animus of some investigators.

But because the report's scope was limited to the Clinton investigation, it stopped short of analyzing that bias in the context of the Russia collusion investigation.

As we digest the conclusions of the Mueller report, let's refresh our memories about what Inspector General Horowitz has already documented.  His June report exposed "extremely poor judgment and a gross lack of professionalism” by FBI officials who engaged in anti-Trump texting while investigating what we now know was non-existent collusion with Russia.

The Horowitz report revealed "profound concerns about the volume and extent of unauthorized media contacts by FBI personnel,” finding that “FBI employees received tickets to sporting events from journalists, went on golfing outings with media representatives, were treated to drinks and meals after work by reporters, and were the guests of journalists at nonpublic social events." The sheer volume of media contacts "impacted our ability to identify the sources of leaks."

Horowitz also revealed that the FBI pulled its punches with regard to Hillary Clinton’s use of a private computer server and private email account to send and receive all her government emails while she served as secretary of state.

In testimony before the Senate Judiciary Committee, Horowitz said: "We found that the FBI’s explanations for its failure to take immediate action after discovering the Weiner laptop in October 2016 to be unpersuasive, and we did not have confidence that the decision of Deputy Assistant Director Peter Strzok to prioritize the Russia investigation over following up on the Weiner laptop was free from bias."

The “Weiner laptop” refers to a laptop computer used by former Rep. Anthony Weiner, D-N.Y., who was married at the time to Hillary Clinton aide Huma Abedin.

Though that Horowitz report on its own did not conclusively prove bias, when it is combined with the Mueller report and the upcoming report involving the Foreign Intelligence Surveillance Court, we may well see an undeniable pattern of an agency obsessed with discrediting a presidential administration over doing its job.

Based on what the Horowitz has revealed already, the bias went to the very top.

When Peter Strzok, the chief of the FBI's Counterespionage Section, had time to send tens of thousands of text messages to his paramour – FBI lawyer Lisa Page – what wasn't he working on? Was there nothing more important relating to Chinese spying, North Korean nuclear capabilities, ISIS terrorists, or actual Russian threats to our security?

Our geopolitical foes are very sophisticated. What does it tell us that the head of counterespionage was unaware his text messages could be compromised?

All of this is very unfortunate for an agency that had once earned the reputation for being dispassionate and professional. That's how I’ve found most FBI officials to be in my interactions.

My grandfather was a career FBI agent. I can't imagine trying to explain to him how his FBI has accepted gifts, tickets and favors from the media to share information during political campaigns.

The Office of Inspector General report issued in June made it clear that we have not yet seen the full disciplinary response to the lack of candor and professionalism thus far revealed involving investigators in the Russia collusion probe. Many questions remain to be answered.

Did bias and animus at the FBI lead the agency to prioritize political investigation over genuine threats?

Did FBI officials take action they would not have otherwise taken if their politics had been different?

To what degree was CIA Director John Brennan – now out of office and a harsh critic of President Trump – involved in the Russia investigation?

How much did President Obama and his inner circle know about the FBI efforts to surveil the Trump campaign and how did they react?

Was the unmasking of surveilled of Americans by Obama appointees used to create the Russia collusion narrative?

If all the reports reveal a pattern of political bias and against Trump, only substantive reforms and personnel changes will restore the credibility of federal law enforcement.