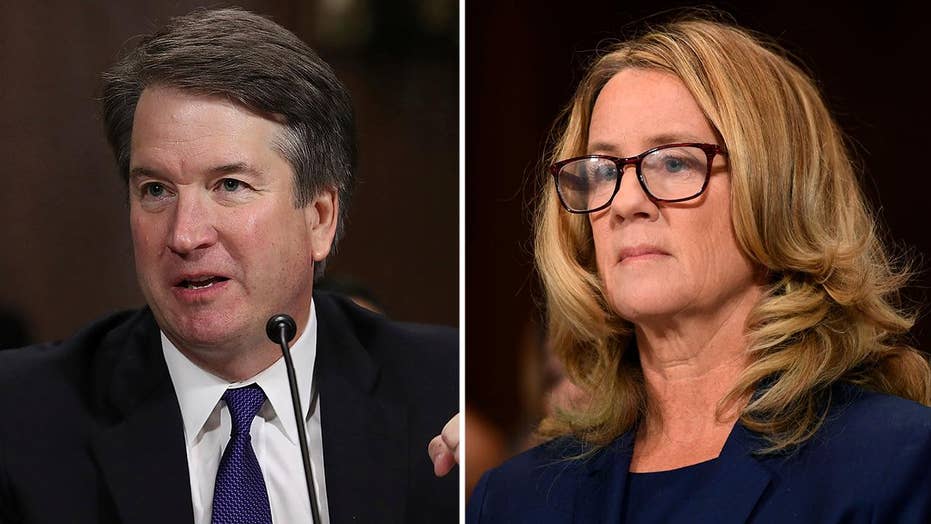 Breaking down the fallout of the Kavanaugh-Ford hearing

Former Indiana congressman David McIntosh reacts to the testimony from the judge and his accuser.

During the past week or so we have learned absolutely nothing we didn’t already know about Supreme Court nominee Judge Brett Kavanaugh – except that he has a passion to defend his honor, which was on full display Thursday at his confirmation hearing before the Senate Judiciary Committee.

As the committee prepared to vote Friday on Kavanaugh’s confirmation to the high court, we have, however, learned a great deal about Senate Democrats and their media enablers – much of which we wish we could unlearn.

We’ve learned that the Democrats have officially adopted a new posture – one that President George Washington, Thomas Jefferson, Abraham Lincoln and even Franklin Roosevelt could have never seen coming. The Democrats will do anything and will say anything – and I mean anything – to "win."

There are no boundaries. No treachery is "off-limits" any longer. Anything goes. Presumption of innocence? Gone. Due process? Gone. Burden of proof?  Shifted. Rules of evidence? Non-existent. Any pretense of integrity, honesty, or compassion? Zeroed out.

Do any of us – real, working Americans, who pay our taxes and play by the rules – want to see this become the new normal in American politics? Because if we don’t, this is the time to fight back. This is zero hour. Not in 2020.

As horrid as the Democratic elites have been, I don’t believe this new posture reflects a majority of Democratic working families across the country. I believe the leadership and extremists of the party have completely flown off the rails and left normal, left-of-center Democrats behind.

Democratic leaders have the nerve to call us "deplorable" and "dregs of society?” In reality, they have forever redefined those very terms downward and applied them indelibly to themselves.

I do not believe this repugnant, revolting display of ignorance and maliciousness attracts, reflects or represents a majority in this nation. The November midterm elections really will tell.

If the majority of voters buys what the Democratic-media elite is selling, our nation will have suffered yet another day that “will live in infamy.” We will have abandoned any commonality in our institutions, our traditions, our mores and our ability to hold together as a nation. There will no longer be any "we" in "We the people.”

Heaven help us if this works. If politicians learn from this that the formula for scuttling nominations with which they disagree is an avalanche of evidence-free allegations – solicited and prodded by partisan operatives and choreographed to blow up the confirmation process – that process is forever lost.

With such a tactic, truth is the first casualty. Partisans “win” simply by delaying or pressuring a nominee to withdraw. By the time the truth comes out, they will have their “win.”

For decades, extremists and radicals of the left have been accused of "hating America." I always thought that was extreme, that America is a big tent and has room for many opinions and viewpoints. I defended their right to protest.

I never wanted to characterize those who were discontented with policy or politics as "hating" this nation.

But when the leadership of a major political party joins in concert to destroy the very institutions that have allowed this republic to stand; to gladly light the torches to burn the institutions to the ground; and to obliterate every trace of decency, tradition and cohesion that has sustained us since the founding – I am left with no other conclusion available to me.

This is what has shocked me: the Democrats’ and their media allies’ willingness to destroy the nation in order to, in their fevered minds, “save” it. This I was not prepared to see. It is heartbreaking. Hate never saved anything.

The new Democratic standard of "presumed guilty" is no American standard; it is the standard of Stalin, of Castro, of the Khmer Rouge, of Mao. Is it coincidence that the new "it" meme for Democrats is socialism? Think about that, America, before you turn the majority in Congress to those who now embrace that and other such standards.

Do any of us – real, working Americans, who pay our taxes and play by the rules – want to see this become the new normal in American politics?  Because if we don’t, this is the time to fight back. This is zero hour. Not in 2020. Not when the shoe is on the other foot. But this election. Now. In these midterms.

Americans of all stripes must put the “we” back in the “We the people” by loudly and definitively rejecting the politics of personal destruction and the people who practice it.