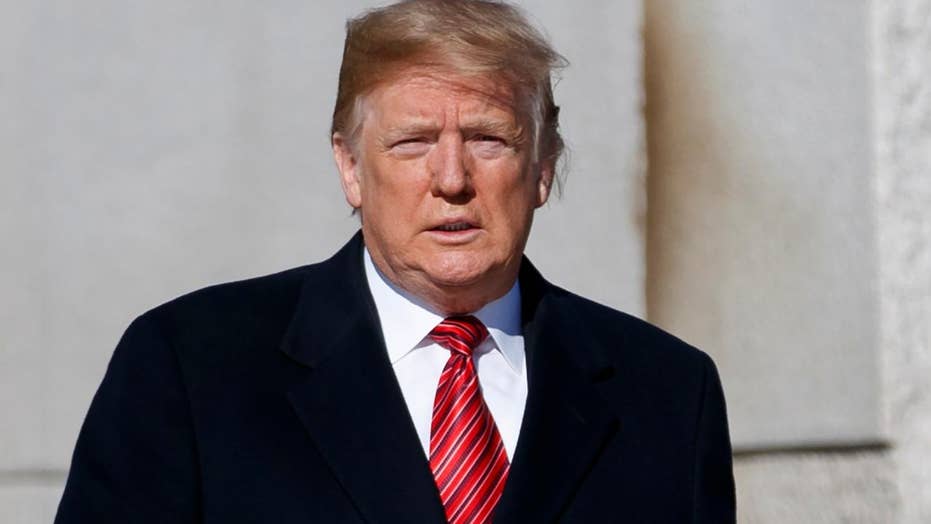 It’s disappointing that the Supreme Court failed Tuesday to grant the Trump administration’s appeal of a lower court order that prevents the president from ending the Deferred Action for Childhood Arrivals (DACA) program. But it’s not the end of the story.

Importantly, the high court didn’t reject the request filed by the Justice Department to allow President Trump to end DACA. The request is still pending.

If the Supreme Court grants the Justice Department’s appeal of the lower court order between now and the end of June, the case to determine the fate of the DACA program will be heard during the next term of the court that begins in October.

BUILD THE WALL AND ALLOW DACA RECIPIENTS LIKE ME TO STAY IN AMERICA, THE ONLY COUNTRY I KNOW AND LOVE

Roughly 700,000 immigrants brought to the U.S. illegally as children are protected from deportation by DACA. The argument in favor of the program is that the children didn’t choose to break the law and so should not be punished because their parents violated immigration laws by bringing them to the U.S.

But the central issue at stake in the DACA case is not whether the young people now protected by DACA deserve or don’t deserve to be allowed to stay in the U.S. The issue at stake is what power the Constitution gives the president to act alone by issuing executive orders, without seeking approval from Congress.

The framers of the Constitution very deliberately set up a system of government where power was divided between the president and Congress, with the courts given the power to rule on disputes. These checks and balances were created to prevent one person from ruling the country as an all-powerful king or dictator. The system has worked brilliantly.

To preserve that system of checks and balances, the Supreme Court should hear the appeal of the lower court case on DACA and give President Trump the authority to end the program.

No matter what view you may have about whether the DACA program is good public policy, the decision to extend amnesty and government benefits to illegal immigrants is a decision that under the Constitution can only be made by Congress – not the president.

President Trump announced Saturday that he would support legislation in Congress to extend DACA protections for three years for the 700,000 young people now in the program, and also support a three-year extension of another program that allows 300,000 immigrants from countries stricken by disasters or conflicts to stay in the U.S. But in return, the president said Congress would need to approve the $5.7 billion he has requested for a barrier along portions of our southern border.

Rather than agree to the president’s compromise proposal that would give DACA the congressional approval it needs to pass constitutional muster for three more years, Democratic leaders in the House and Senate rejected the offer immediately because they refuse to fund the expansion of current border fencing.

DACA was created by an executive order issued by President Obama in 2012 without the approval of Congress – despite the fact that Article I, Section 8 of the Constitution assigns complete authority to Congress to determine our nation’s immigration rules.

But providing administrative amnesty and access to government benefits is beyond a president’s constitutional and statutory authority. This was the ruling of the 5th U.S. Circuit Court of Appeals when it upheld a court order against President Obama’s attempt to expand DACA and implement another program with similar benefits in 2014, called Deferred Action for Parents of Americans and Lawful Permanent Residents (DAPA).

The appellate court said that federal immigration law “flatly does not permit the reclassification of millions of illegal aliens as lawfully present and thereby make them newly eligible for a host of federal and state benefits, including work authorizations.” A divided U.S. Supreme Court upheld this decision in 2016, leaving the court order against DAPA in place.

The Trump administration announced in 2017 that – given the Supreme Court’s ruling in the DAPA case – it was going to wind DACA down, too, since the same arguments accepted by the courts as to the unlawfulness of President Obama’s actions on DAPA applied equally to DACA. This is a logical and obvious conclusion.

President Trump said the wind-down would not immediately terminate the two-year grants of immunity that DACA recipients had received. This would give Congress time to act if it believed the DACA program was something that should be authorized through federal immigration law.

Given the huge battle currently going on over immigration policy, funding for a border barrier and the partial government shutdown, it should come as no surprise that Congress did not act on DACA.

Instead, a number of challengers – including the University of California – went to court and managed to convince a federal district court judge and a panel of the 9th U.S. Circuit Court of Appeals to issue a court order preventing the Trump administration from ending DACA.

The lower court rulings defy not only common sense, but the Constitution.

It is untenable to claim that a subsequent president cannot end a program put in place by a prior president – particularly when courts have already held that prior executive action by a president on virtually the same issue was beyond his executive authority, violating the Constitution and statutory law.

No one questions that Congress could implement a DACA- or DAPA-type program. Congress can grant citizenship or amnesty to any immigrants it wants. But a president lacks the authority to do so.

The wisdom of the policy of allowing DACA recipients to spend the rest of their lives in the U.S. and eventually become citizens – as many Democrats in Congress advocate – is also questionable.

The media portrayal of DACA beneficiaries paints a uniformly rosy picture of highly educated, fluent individuals. But that is not in accord with the facts.

For example, according to the most recent figures only 49 percent of DACA beneficiaries have attained a high school education – despite a majority of them now being adults.

Almost no background checks were conducted by the Department of Homeland Security, resulting in illegal immigrants with criminal backgrounds being accepted into the DACA program, including members of the MS-13 criminal gang.

And one study estimates that perhaps as many as a quarter of DACA-eligible illegal immigrants are functionally illiterate in English, while another 46 percent have only “basic” English ability.

Providing amnesty and potential citizenship to DACA recipients and other illegal immigrants before we have a secure border will only encourage even more illegal immigration, just as the 1986 amnesty in the Immigration Reform and Control Act did.

The federal government should be concentrating on enhancing immigration enforcement and border security to stem the flow of illegal immigrants into the country and reduce the number of them already in the interior of the U.S.

Until we achieve those goals, it is premature to consider any kind of benefits for any immigrants in the U.S. illegally.

The Supreme Court has a duty to take up the Trump administration’s DACA appeal and throw out actions by lower courts that are not in accord with the Constitution and federal immigration law. That action would send this issue of whether the DACA program should exist back to where it belongs – not to the president, as President Obama mistakenly believed, but to Congress.