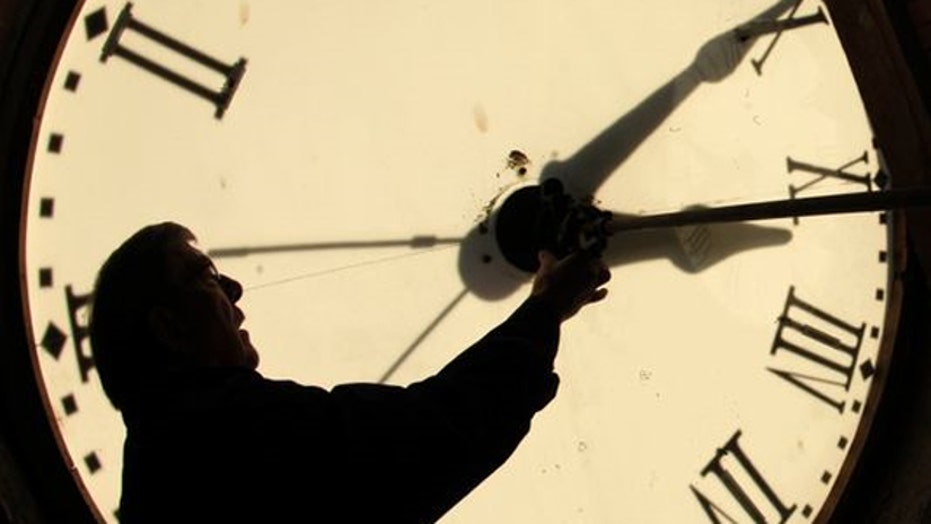 Tips to help you adjust to end of Daylight Saving Time

Clocks set to 'fall back' on Sunday

At 2 a.m. Sunday, daylight saving (not savings) time comes to an end for most Americans. Good riddance. Turns out it’s a lot like Justin Bieber – way overrated.

People think that farmers like DST, but that’s a myth. Author Michael Downing points out his book “Spring Forward: The Annual Madness of Daylight Saving Time” that farmers were the main group lobbying against the first peacetime imposition DST in 1966.

It seems farmers don’t like the later sunrise created by DST and dairy cows adjust poorly to moooving the clock.

But DST helps conserve energy, right? No, that’s another myth, burst by a study by the California Energy Commission that found a reduction in energy use under DST of less than two-tenths of 1 percent.

And National Geographic reported that a 2008 National Bureau of Economic Research study of DST in Indiana “found that lighting demand dropped, but the warmer hour of extra daylight tacked onto each evening led to more air-conditioning use, which canceled out the gains from reduced lighting and then some.” As a result, electric bills increased slightly under DST.

The real beneficiaries of DST are the charcoal and grill industry, which lobbied successfully to tack a seventh month on to DST, and the candy companies, which pushed Congress to add an eighth month so they could sell more mini-Kit Kats in the days before Halloween.

So I say, let’s have Congress – which hasn’t been able to agree on almost anything this year – pass a bill eliminating daylight saving time. And as a kicker, the bill could revoke Justin Bieber’s work permit and send him back to Canada.

Eliminating DST provides endless benefits – and not just for cows. You won’t have to struggle to figure out what time it is in Arizona or Hawaii, which don’t change their clocks.

The airlines will save hundreds of millions of dollars, because they won’t have to shift flights to handle the twin time changes in spring and fall.

Amtrak won’t have to pull its trains over to sidings in the fall (so they don’t arrive too early – and yes, they do that) or race to be on time in the spring.

Best of all, you won’t be an hour late for church or golf in March or an hour early in November. There’s always one guy who strolls in an hour late on the first Sunday of DST, oblivious to the time change, the cause of much snickering among people intelligent enough to spring ahead.

Childhood obesity will diminish, because kids will have an hour less to trick-or-treat.  (OK, that’s wishful thinking.)

But on a serious note, the New York Times published an article in 2014 reporting that Swedish researchers found a 5 percent increase in the risk of heart attacks right after DST began, along with an increase in traffic accidents, workplace injuries and suicide rates. The problem is that while our body clocks can slowly adjust to seasonal changes in the amount of daylight, the sudden change when DST begins throws off our body rhythms.

Some people might say that Daylight Saving is a hallowed national tradition. Yes, Benjamin Franklin had the idea first, but when he wrote about it in 1784, he was in Paris and he meant it as a joke. He wrote a satirical piece about how the French could save 200,000 candles a year if they adopted his plan.

The French, of course, had no sense of humor, took Franklin seriously, and adopted the idea. They didn’t save any candles, but since everybody could see who was going to whose apartment, the rate of adultery may have dropped precipitously.

America adopted DST in fits and starts, kept it going all year long (how can you tell?) during World War II, and finally made it national in 1966, unless a state opted out.

So it’s only as much of a tradition in this country as, say, expecting the Mets to be out of the pennant race by August.

While we’re at it, it’s time to realign time zones in the United States so they actually make sense. Who said time zones have to be vertical? They would actually make much more sense if the country were realigned as follows:

Have one time zone that encompasses most business and finance – the new Important Standard Time, which will stretch from Boston to New York, Philadelphia, Washington, Chicago, Denver, Salt Lake City, Dallas, and Los Angeles.

South of that will be Golf Standard Time.

Just north, Redwood Standard Time, which will separate Southern California from Northern California, which is what both halves of the state have always wanted anyway.

Sending Bieber back to Canada? Maybe that’s the only thing all Americans can agree on.