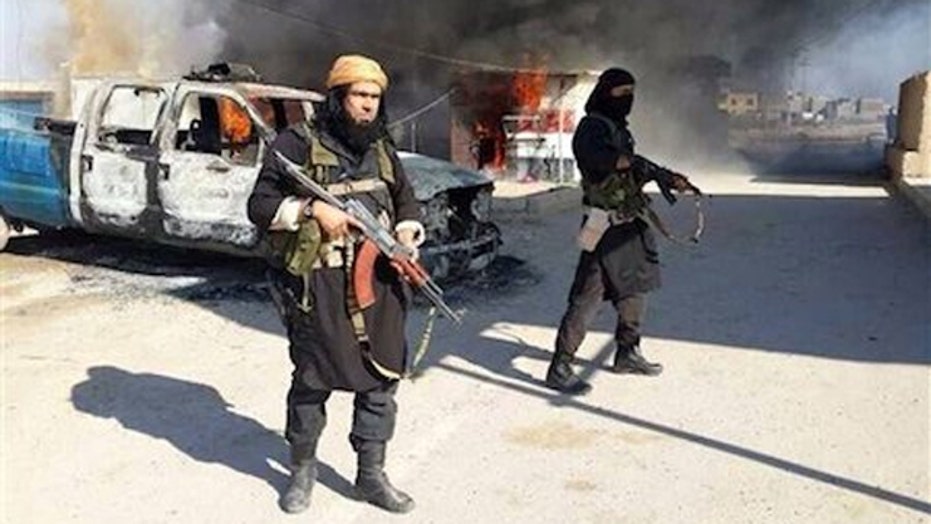 Activists claim up to 100 Christians captured by ISIS

Still reeling from last week’s news of the Islamist beheading of 21 Coptic Christian migrant workers in Libya, Middle Eastern Christians were again targeted by a large scale Islamist terror attack with thousands of victims Monday, in Syria. Islamic State jihadists laid siege to a string of Christian Assyrian villages, along the Khabour river, in northeastern Syria, kidnapping or killing scores of residents. Those abducted are now in imminent peril and thousands more who were expelled have joined the ranks of mendicant displaced.

Piece by piece, Middle Eastern Christianity is being shattered.

President Obama must acknowledge that ISIS has religious objectives, that its actions are not simply random acts of “extreme violence,” and that ISIS aims to make the region – and beyond-- pure for Islam.

What this means for the Islamist militants are gains in strategic ground and further headway in the goal of religious cleansing. In other words, the Islamic State also known as ISIS is still winning -- militarily and politically. And despite upbeat statements about our counter-terrorism strategy by new Defense Secretary Ashton Carter, and last week’s Counter Violent Extremism conference at the State Department, our side -- those who oppose this barbarism – finds itself still back on its heels.

President Obama must acknowledge that ISIS has religious objectives, that its actions are not simply random acts of “extreme violence,” and that ISIS aims to make the region – and beyond-- pure for Islam.

Archimandrite Emanuel Youkhana of the Assyrian Church of the East emailed that sources in the city of Hassakah, reported that some 3,000 of the villagers managed to flee, either to that city or to Qamishly, where they are being sheltered in churches. According to his source, who requested anonymity, the captives included “50 families in Tel Shamiran, 26 families in Tel Gouran, 28 families in Tel Jezira, and 14 young people (12 males and 2 females) who were defending Tel Hormiz.” Milad, a 17-year-old man, was “martyred.”

Since a family averages five people, this translates to over 120 Christians captured by ISIS. The Islamist militants reportedly separated the captives, men from women and children -- a pattern also seen when ISIS attacked Iraq’s Yizidi community on Sinjar mountain last August. The Syrian Christians’ fate is unknown but could include murder, enslavement, rape or traded as a hostage. Churches in the seized villages could be seen ablaze from the opposite river bank.

Syrian-Catholic Archbishop of Hassakah-Nisibi, Jacques Behnan Hindo, told the Vatican press Fides that the Christians feel like they are “abandoned into the hands” of ISIS.

“Yesterday American bombers flew over the area several times, but without taking action. We have a hundred Assyrian families who have taken refuge in Hassakah, but they have received no assistance either from the Red Crescent or from Syrian government aid workers, perhaps because they are Christians. The UN High Commission for Refugees is nowhere to be seen.”

Archimandrite Youkhana observes that, after its defeat in Kobani, ISIS redirected its fight to the Christian Khabour valley, which was weakly defended by Kurds and Christian Assyrian defense squads, while the PYD (Democratic Union Kurdish Party) was fighting elsewhere. He reported that IS also had support from neighboring Sunni Arab villages. A welcome exception were the Sunni Arabs near the Christian Assyrian village of Qaber Shamiat, who rescued 15 Christian men and women.

The U.S. military’s Central Command reported that in fact there were coalition airstrikes on Monday near Hassakah. But evidently,there were not nearly enough. Ten airstrikes hit 2 jihadists vehicles, far less than what was needed to deter the ISIS’ convoy of 40 jeeps advancing that day on the strategic but vulnerable 40 kilometer Christian stretch of the Khabour, close to the Iraqi border.

President Obama must acknowledge that ISIS has religious objectives, that its actions are not simply random acts of “extreme violence,” and that ISIS aims to make the region – and beyond-- pure for Islam. Maybe then, America’s generals would recognize that Christian, as well as Yizidi, communities are prime targets for ISIS, that Kurdish militias need to be equipped and pressed to protect them and air strikes need to be more seriously deployed.