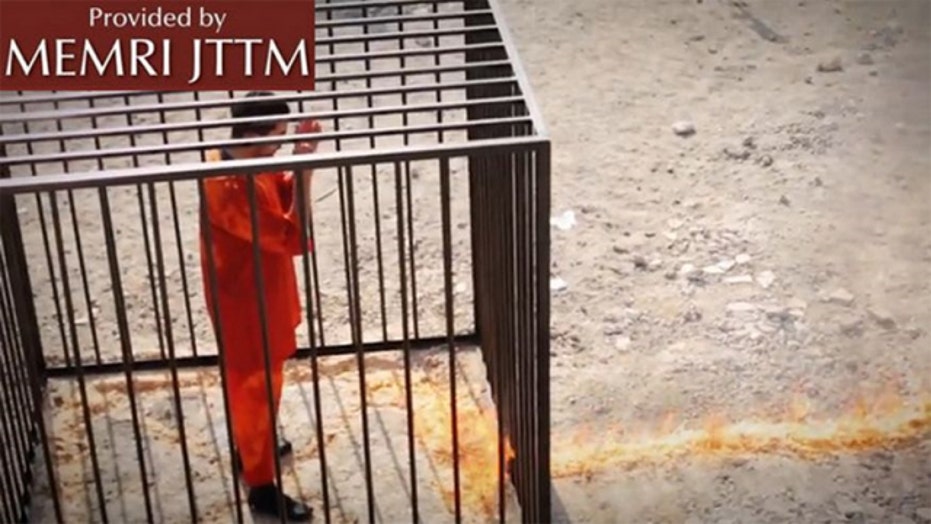 America wants to know, when is President Obama going to get angry? When is he going to slam his fist on the desk, demand vengeance, put aside his incessant campaigning and call out the Islamic radicals of ISIS as the animals they are?

Interrupted in the course of yet another photo-op on the benefits of ObamaCare, the president looked almost irritated Tuesday to be asked his reaction to the murder of the Jordanian pilot, shown on an Internet video being burned alive by ISIS.

When is President Obama going to slam his fist on the desk, demand vengeance, put aside his incessant campaigning and call out the Islamic radicals of ISIS as the animals they are?

He talked calmly about the “bankrupt ideology” of this “organization,” like he was addressing unhealthy menu choices at a fast food company. Where’s his outrage?

When is President Obama going to slam his fist on the desk, demand vengeance, put aside his incessant campaigning and call out the Islamic radicals of ISIS as the animals they are?

At the least, we would expect Mr. Obama to be angry that his relentless pursuit of legacy goals is yet again likely to be sidetracked by pesky questions about his anti-terrorism strategy. Faced with yet another House vote to repeal ObamaCare, the president thought fit to host several families who apparently consider themselves beneficiaries of his legacy health care bill. Too bad; happy talk about health care probably won’t be tomorrow’s headlines.

He doesn’t get it. No one doubts that many Americans are happy to be receiving free health care. It’s the rest of the country – still the majority – who are unhappy that our policies cost more than they once did, that those same policies are not as generous as in the past, that we may no longer visit our favorite doctors or hospitals, that we may be fined if we don’t sign up for insurance, that health care costs are still going up, that none of the supposed experiments in tort reform have surfaced – in short that we are now paying for those lucky enough to be on the receiving end of the country’s largesse.

A recent poll shows more Americans saying the United States is less safe from terrorists now than at any point since 9/11. We are concerned that our president does not share our alarm.

Rather, he appears desperate to sign a deal with Iran, he pretends that withdrawing our troops from Afghanistan and Iraq has made us safer, he proposes in his budget to actually cut back spending on our overseas anti-terrorism effort, he spurns Israel, and can’t be bothered to show up in Paris when the world gathers to protest the savage murders at Charlie Hedbo.

Once again this past weekend, in an interview with Fareed Zakaria, President Obama said he doesn’t “quibble with labels,” suggesting that the denouncement of Islamic terrorists was not an important declaration, but rather unnecessary nitpicking.

He made the case, once again, that we need to acknowledge that though ISIS is a “particular problem that has roots in Muslim communities,” we harm our cause if we fail to recognize that most Muslims “reject this ideology.”

Fair enough, but a case could be made that Muslims around the world are doing far too little to “reject” extremism, a point recently made by New York’s Cardinal Timothy Dolan. As he pointed out, during the “troubles” in Northern Ireland, the Catholic Church would routinely condemn acts of IRA violence.

Where are the moderate Imams? Their silence is deafening.

Mr. President, these savages of ISIS have taken your measure, and are not impressed. They know we do not have the resolve to put aside politics and devote the country’s energies towards coming after them full-bore. They know you are obsessed with you infernal “legacy” which, as luck would have it, will include some of the worst foreign policy blunders of modern times.

Robert Gates, Leon Panetta – even Chuck Hagel – they have all blasted your inept foreign policy. Just wait until Hillary Clinton hits the campaign trail in earnest; my guess is she will not be a supporter.

The world is a dangerous place, and unhappily you have been in the crosshairs as a new, malignant threat has emerged – the group you once derided as the "JV team." They turned out to be savages, varsity level, as the most recent ISIS video makes clear.

Presumably the ISIS strategists (unlike your administration it appears they do have a strategy) decided we were becoming inured to beheadings; they took it up a notch. Their most recent video does just that, signaling a new and more gruesome barbarism.

President Obama, you need to address the nation, and condemn Islamic radicalism – something you have been unwilling to do. The time is now.