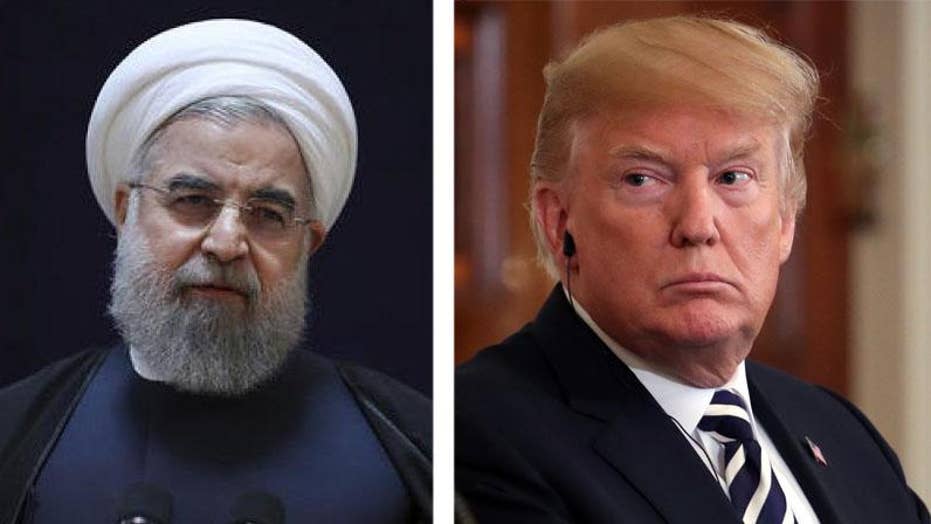 President Trump says his administration is implementing an aggressive stance toward Iran, despite being prepared to talk. Rich Edson has the story for 'Special Report.'

Don’t look for any improvement in U.S.-Iranian relations anytime soon, or for a summit between President Trump and Iranian President Hassan Rouhani.

“Mr. Trump! Iran is not North Korea to accept your offer for a meeting,” Jafari said Tuesday, according to Iran’s Fars News agency. “Even U.S. presidents after you will not see that day.”

President Trump exposed Iran’s diplomatic hypocrisy when he suddenly offered to meet with Iranian leaders if they wished.

Secretary of State Mike Pompeo quickly added preconditions for a meeting. He told reporters that President Trump will meet Iran’s leaders only if they “reduce their malign behavior” and “enter into a nuclear agreement that actually prevents proliferation.”

The Iranians negotiate faithfully only when they have no other recourse, and change their behavior only when diplomacy is backed by the credible imposition of costs for noncompliance. This is because the Islamic Republic is not – as some incorrectly argue – a rising state with peaceful intentions that have not been reciprocated by America’s Arab Gulf allies.

In reality, Iran is an aggressive and expansionist power that is actively exploiting sectarian fault lines to remake the Arabian Peninsula-Persian Gulf region and the wider Middle East in its own revolutionary image.

The 2015 Iran nuclear deal – reached by the U.S. and six other countries – temporarily curbed Iran’s nuclear ambitions by placing restrictions on Iran’s nuclear programs in an effort to keep the nation from developing atomic bombs.

But the agreement failed to do anything to limit Iran’s projection of military power across the region, its capture of territory and political power via proxies, and its aggressive ballistic missile program.

All this makes the Iran nuclear deal a deeply flawed agreement. History has since vindicated the skeptics of the deal, which was reached after over two years of negotiations. President Trump declared in May that he would withdraw the U.S. from the deal, triggering the return of tough U.S. economic sanctions on Iran and worsening already tense U.S.-Iranian relations.

Since the signing of the Iran deal three years ago, Iranian terror cells have been uncovered in Bahrain and Kuwait. Iran continues to aggressively support its Houthi rebel allies in Yemen, who regularly fire Iranian-made ballistic missiles against civilian targets in Yemen, Saudi Arabia and the United Arab Emirates.

Hezbollah has further built up its missile arsenal and strengthened its hold over Lebanon while it, the Revolutionary Guards in Iran and the Iraqi Popular Mobilization Units have –with Russian support – sent fighters to Syria and saved the genocidal regime of Syrian dictator Bashar Assad at enormous human cost and suffering to the Syrian people.

In Iraq, Iran maintains near-total dominance over much of the country through its Revolutionary Guards-controlled militias, which have prevented the formation of an Iraqi government independent of Iran.

Iran makes no effort to hide its ambition to dismantle America’s Middle East security architecture. Its leaders openly boast that the city of Sanaa in Yemen is now the fourth Arab capital to “belong to the Iranian Islamic Revolution” and that “following the victory in Yemen, the turn of Saudi Arabia will undoubtedly arrive.”

But perhaps the clearest indication of the seriousness of Iran’s intent to dominate the Middle East is its continued willingness – despite sanctions and economic distress – to divert billions of dollars to support Hezbollah, Hamas, the Houthis, Assad, the Iraqi Popular Mobilization Units (Shia militias), and its own enormously expensive nuclear program and ballistic missile capability.

Thousands of Iranians are increasingly holding protests in the streets in outrage over their government’s misplaced priorities, which have contributed to skyrocketing inflation, widespread unemployment and inadequate government services. But the protests seem to have had no impact on the conduct of the regime that rules the nation with an iron fist.

As far as Iranian behavior is concerned, we should always look at how the regime allocates its scarce financial reserves – rather than listen to what its smooth-talking diplomats say to foreign audiences – if we wish to better understand Iran’s priorities and objectives.

The unfortunate truth is that Iran will only change its behavior when confronted with the credible threat of tough sanctions backed up by coercive U.S. power.

This is what happened in March 2003. Three months after American satellites verified the existence of Iran’s covert uranium enrichment plant at Natanz – and 10 days before U.S. combat operations began in Iraq – Iran proposed a comprehensive peace deal to Washington. At that time, the prospect of 175,000 U.S. and allied soldiers marching across Iraq’s border after overthrowing Iraqi dictator Saddam Hussein to depose a second rogue regime allegedly developing weapons of mass destruction seemed a real possibility.

But after the threat of a U.S. invasion passed, Iran reverted to old habits and engaged in years of interminable negotiations over its nuclear program. This cost the Islamic Republic nothing, but succeeded in dividing the United States from Europe, Russia and China.

Even the Obama administration – which has been justifiably maligned for turning a blind eye to Iran’s destructive regional policies – understood that Tehran would not negotiate a nuclear deal unless it had no other option. To this end, President Obama’s Cabinet worked with the United Nations Security Council and the European Union (EU) to apply graduated sanctions that culminated in the United States and the EU freezing Iranian assets and banning Iranian oil and petrochemical imports.

Simultaneously, the United States and Israel sabotaged Iran’s nuclear program, knocking out thousands of centrifuges via the Stuxnet computer virus and eliminating at least four key nuclear scientists. Iran only agreed to the nuclear deal after these actions degraded its nuclear capabilities and cost it billions of dollars in lost oil revenue.

America’s Arab allies have learned the hard way that negotiating with Iran without leverage is an exercise in futility. For example, following the election of Iranian President Rouhani, Kuwait actively courted Iran by pushing for closer economic ties, unequivocally backing the nuclear deal, and working to bring Iran closer to its Gulf neighbors.

The Kuwaiti emir also made an unprecedented official visit to Tehran. Despite this, Iran worked to subvert the Kuwaiti government. This activity was finally exposed when the Kuwaitis discovered a large Hezbollah-trained sleeper cell with enough hidden arms and explosives to launch a full-scale revolution in what became known as the “Abdali incident.”

The Trump administration understands that the Iran nuclear agreement failed to deal with what Saudi Ambassador to the U.S. Prince Khaled bin Salman recently described as the “Iranian playbook” – using proxies to prey on sectarian fault lines and “capture” weakened states in order to achieve total regional domination.

President Trump also recognizes that Iran will not negotiate in earnest unless its leaders have no other recourse. To this end, Pompeo’s welcome statement that there are, indeed, preconditions for a Trump-Rouhani summit reassured the United States’ regional allies that Washington will continue to maintain its firm position toward Iranian behavior.

Ultimately, a strong and steadfast America is the best antidote to Iranian mischief. So far, the Trump administration’s unwavering stance has reintroduced an important element of deterrence toward Iran that had weakened considerably under the Obama administration.