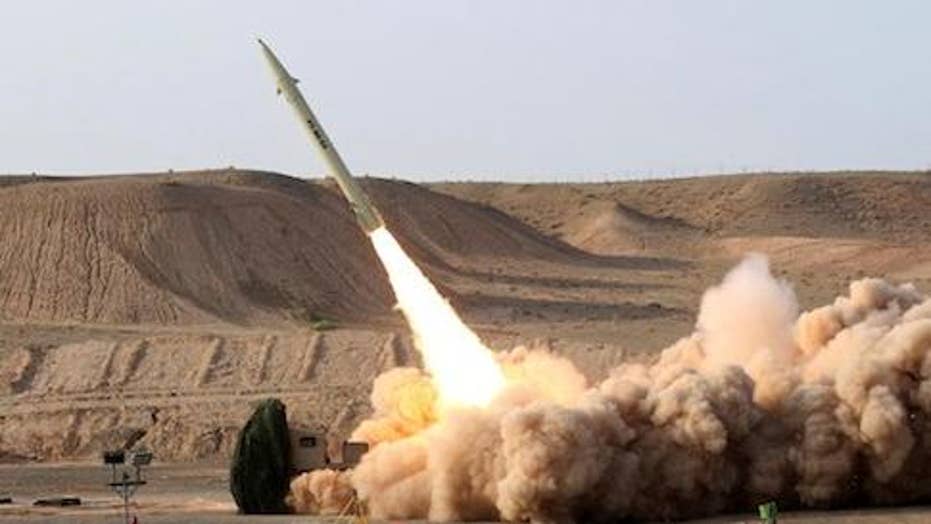 The report says since 2016, the regime has launched 16 missiles considered to be nuclear capable; Rich Edson has the details for 'Special Report.'

The anti-American, radical Islamic theocracy that rules Iran with an iron fist today will likely not be able to hold onto power for much longer. Right now Iran is a ticking time bomb that will explode without a systemic and transformational reform of its economy. And there’s no chance the ruling clerics will make such fundamental reforms.

So at some point this year, growing unemployment, inflation, bankruptcies and declining living standards will inevitably push Iranian citizens back onto the streets in anti-government demonstrations. These could escalate to the point of forcing a change in government.

Iran’s clerical regime will not give up power easily. It is adaptive. Its leaders have outmaneuvered, arrested or assassinated their way out of all previous attempts by Iran’s citizens to challenge state authority. But this time seems to be different. Iran is rapidly approaching a fiscal cliff that expedient short-term fixes cannot make disappear.

During the last week of 2017 and the first week of this year, tens of thousands of Iranians in 142 towns and cities across the country rose up and demanded an end to the repressive clerical rule forced upon them since 1979. As it did during previous mass uprisings in 1999 and 2009, the Iranian government brutally suppressed this challenge to its power.

But the economic and demographic drivers of popular discontent in Iran are not going away. With a rapidly aging population, large parts of Iran’s pension system face bankruptcy.

Due to shortfalls in revenues, the government currently owes more than $35 billion to the country’s largest pension fund, which covers 73 percent of pensioners. The Civil Service Pension Fund’s 1.2 million pensioners outnumber its employed insured workforce.

Iran’s banking system is insolvent. Toxic assets account for 40 to 50 percent of total banking assets. The collapse of private lending institutions in 2017 wiped out the savings of millions of small depositors

What does this tell us? According to researcher Peyman Asadzade, because populations outside Iran’s major urban centers are generally more apolitical and religious, “the protests in small cities are not a struggle for democracy, freedom or women’s rights. Rather, they are the fury of the common folk against a stagnant economy and worsening living standards.”

A 2017 study by the National Council of Resistance of Iran showed that from 2005 to 2015, the nation’s GDP fell by 12 percent. Per capita income declined by a third. And inflation increased by a stunning 176 percent. During the past year, the Iranian currency (the rial) has lost more than 10 percent of its value.

The costs of recapitalizing the banking system, bailing out the pension funds and rebuilding the country’s failing water system are off-balance-sheet liabilities that far exceed Iran’s GDP.  As one economist put it, “the Iranian regime is drowning in unfunded obligations.”

The economic enterprises, foundations and industries under the direct control of Iranian Supreme Leader Ayatollah Ali Khamenei account for two-thirds of Iran’s GDP. Khamenei also controls two-thirds of the nation’s budget. He uses it to fund the security and intelligence bodies under his authority, Iran’s nuclear and ballistic missile programs, and proxy armies in Iraq, Syria, Lebanon and Yemen.

Iranian President Hassan Rouhani holds far less power. Even if he wanted to take steps to liberalize the economy, he has neither the mandate nor the authority required to do so.

Only the Supreme Leader, with the acquiescence of the clerical authorities in the Guardian Council and Expediency Council, could undertake the structural revolution necessary to avert economic disaster, and there is no way that will happen.

Iran is not China. It cannot enact sweeping economic reforms while at the same time preserving the current system of government. For Iran, economic liberalization would compromise the coercive power of the state, which in turn would lead to uncontrollable popular unrest.

The clerical regime and its security arm, the Islamic Revolutionary Guard Corps, are therefore in a death spiral. The real questions are not if, but when will the government will fall, and what should the United States do about it?

Iran’s recent protests demonstrated that the country is closer to a counter-revolutionary tipping point than many previously realized. If the economy is the regime’s Achilles heel, the United States should dial up the economic pressure.

Congress and the Trump administration should:

? Expand the number of Iranian entities subject to economic sanctions.

? Designate the Revolutionary Guards as a terrorist organization.

? Sanction the enterprises the business the Iranian government controls, as well as any outside entities that do business with them.

? Impose costs on the Iranian regime for its support to the terrorist group Hezbollah, Syrian dictator Bashar Assad and the Houthis (radical Islamic military forces in Yemen).

The faster we act, the sooner the people of Iran will be in a position to free themselves of clerical rule, and the better off the world will be.

Adam Ereli was the U.S. ambassador to Bahrain and deputy State Department spokesperson during the George W. Bush Administration.