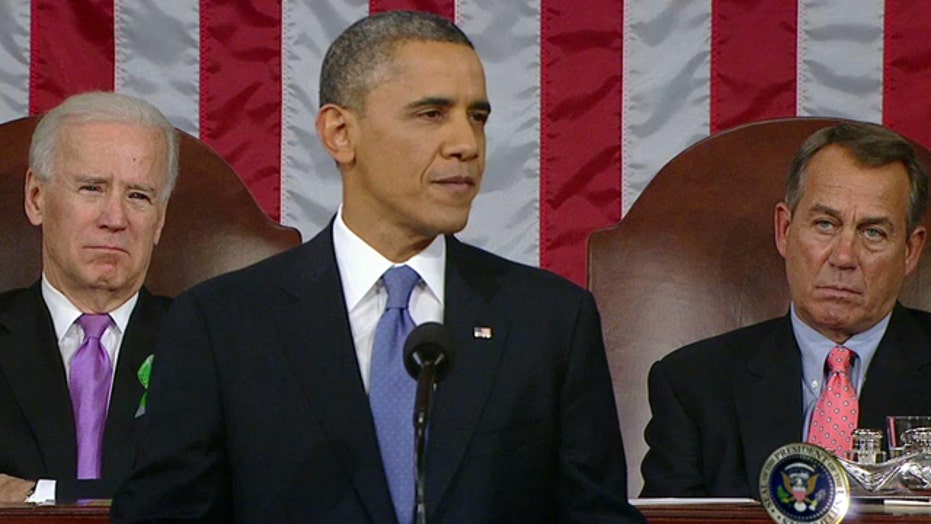 Obama: Now is not the time to gut job-creating investments

State of the Union, Part 2: President pledges to make 'America a magnet for new jobs and manufacturing'

President Barack Obama took us inside his mind, again, Tuesday night and gave us a glimpse of what motivates him, how he sees the country and how much of the country sees itself.

The president is psychologically predictable. He does not surprise. Having been abandoned as a boy by his father, and then his mother, only to then learn that his grandmother feared people of his race, he seems inherently to distrust individual initiative and intention and to place his trust only in the collective—i.e. the state. What benefits a burgeoning central authority is good for all.  When a child’s guardians keep letting him down in profound ways, that child can grow up to want a lot of power himself and distrust the idea of giving anyone else very much.

Hence, the president wants to use tax increases to remove wealth from those who earned it, fair and square.  Because, you see, wealth really does confer power on those who amass it, and giving that kind of authority to individuals, rather than the collective, is anathema to the President.  It likely reawakens in him very closely held memories of what he got from his parents when most in need: Not much.

Individuals are also better off without guns, the president would have us believe. It is true, of course, that some capital crimes are committed with guns (but only the minority with automatic weapons, and lots with knives and explosives and by strangulation, too).

But guns also happen to empower tens of millions of American individuals, too. They promote in individuals the idea that they can take care of themselves and make their own decisions and take care of their families, including their children. And that’s what I believe is the president’s real problem with them.  Because, as a boy, the independent decisions of the adults around him were, frankly, horribly traumatizing.

The president celebrates his Affordable Care Act. But the reality of ObamaCare is that, for the first time, ever, it earmarks American citizens’ after-tax income to be spent, by law, on a product that they might or might not want:  health insurance. They have to buy it. The collective always knows best in Obama’s mind.  Because individuals left him out in the cold, when he needed consistency and nurturance the most.

Many millions of young Americans listened to Barack Obama on Tuesday night, as they have listened to his core message for nearly five long years. And his message has remained remarkably consistent and remarkably toxic to their psychological well-being:  Do not rely on yourself.  Entitlement Nation will parent you, until you forget about growing up, period. Stay on your parents’ health insurance, even if you are 18 and in great health and would rather—wisely or not—use that money to start an Internet company in your basement.  It’s okay to blame rich people if you can’t earn money.  Just ignore the fact that government policy is now hostile to entrepreneurs who might otherwise decide it is worth the risk to staff up.

The government will even grade colleges and tell you which ones are worth attending.  Really?  Teenagers can’t even research that for themselves, anymore?  Their parents can’t help them evaluate schools?  The state, the collective—long known for the miserable educational system it has deployed—will  decide which institutions of higher learning are worthy?

Welcome to the psychological projection of an abandoned boy’s vision of how much you can rely on other individuals and on yourself. The less, the better.  When your mother and father take off on you as a kid, when your white grandmother seems to fear people of color, you probably figure putting any trust in individuals is crazy.

My 10-year-old son was watching last night.  I was just glad that he got to see part of the Bruins’ game, too.  Because he saw remarkable athletes find something inside themselves that they tapped to come back from being down three goals, to tie the game 3-3 (even though they eventually lost in a shootout).  And when Brad Marchand scored that tying goal, with 42 seconds left, and no goalie in the Bruins’ net, I saw my son jump up, out of his chair and pump his fist in the air and yell, “Yes!  He did it!  He did it!”

People—individual people—make things happen.  Yes, they are part of a team.  But celebrating their individual accomplishments and rewarding them for them isn’t bad.  It’s good.  Brad Marchand scored that goal.  He did it.  And people build their own businesses, too, Mr. President.  Things did not go well for you at the hands of the individuals who were empowered to care for you.  But individuals are not inherently bad.