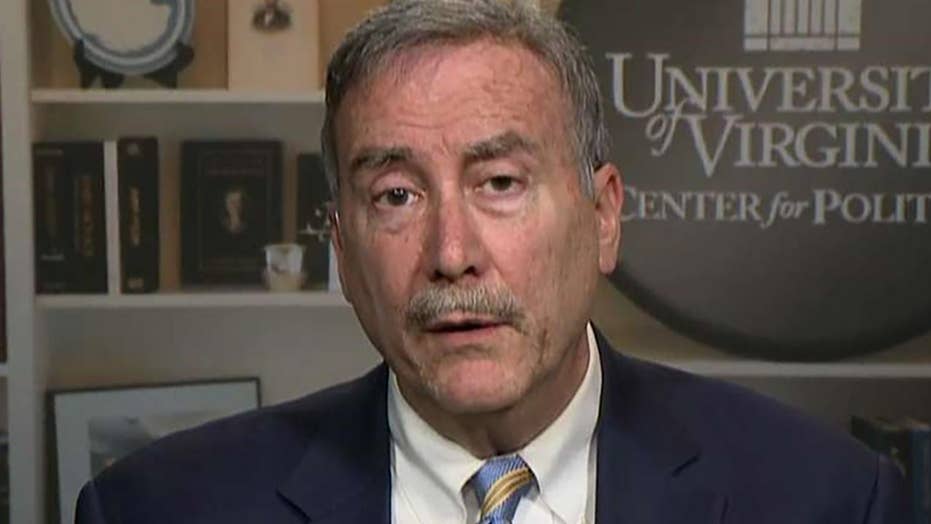 Candidates set out on final campaign push ahead of midterms,

Larry Sabato, director of the University of Virginia Center for Politics, on the crucial final weekend for candidates.

Political operatives and pundits are always sounding the alarm and declaring that the next election is the most important one ever.

As campaigns have heated up in the last few week for Tuesday’s midterm elections, party leaders have been quick to claim premature victory. They hope if they say their candidates are winning enough times, momentum will be willed into action. Just think of how many times you have heard a Democrat say a “blue wave” is coming.

While I may be a Democrat, I do not see the midterms as a wave election for either party. This is not 2006, when Democrats ran a nationally coordinated campaign based on restoring ethics in Congress.

Today it may seem that the Democrats only national platform is to be anti-Trump. Maybe that’s how the party elites make it sound, but in reality, candidates have to position themselves differently vis-à-vis President Trump.

In Democratic districts where Trump won in the 2016 president race, Democratic candidates have to be careful not to alienate the all-important Trump voters. Conversely, in Republican districts won by Hillary Clinton, GOP candidates often keep President Trump at arm’s length.

Neither party has had the luxury to run a coordinated national campaign this year. There are too many variables, and both parties are also shifting ideologically.

This midterm cycle is driven by state and district-level dynamics. The strengths and weaknesses of individual candidates clearly also contribute heavily to the competitiveness of each race.

And where incumbents are running for re-election, being part of the “establishment” does not hold the value it once had. In fact, thanks in part to President Trump’s unconventional path to the White House, voters seem to be more open to non-traditional, first-time candidates than ever before.

I know that polls are not always the best indication of electoral outcomes. We all learned that in 2016. But I think it is still possible to assess broader trends, alongside polling data, to draw educated predictions about elections. It is with this approach that I am making my midterm observations and predictions.

The contest to control Congress gets most of the media attention, but gubernatorial and state legislative races have significant national implications. These elections will shape the dynamics of the 2020 presidential election as well as congressional redistricting in 2022. Arguably, state government races have longer-term impacts on the political landscape than federal elections. As a former state lawmaker myself, I have seen this firsthand.

On Tuesday 36 states will hold elections for governor. Of those, 16 are open seats – with seven of those listed as tossups by RealClear Politics. A number of the tossup races somewhat mirror 2016 battleground states.

For example Ohio, Florida, Nevada and Wisconsin were swing states two years ago. Now each of these states has neck-and-neck race for governor as well. It is always tempting to try to find a common thread in political trends, but I caution against that.

Yes, these four states were all swing states, but Nevada went for Hillary Clinton while the rest went for Trump. Wisconsin has an incumbent GOP governor; Nevada is a three-way race while Florida and Ohio are open seats.

Trump does loom large in both Ohio and Florida’s gubernatorial races. Republican former U.S. Rep. Ron DeSantis is largely seen as a Trump disciple, making the contest for governor in Florida a proxy war between Trump’s Republican Party and the Bernie Sanders progressive wing of the Democratic Party, represented by Democratic candidate for governor Andrew Gillum, the African-American mayor of Tallahassee.

In my home state of Ohio, longtime GOP fixture Attorney General Mike DeWine is running against Democrat and former Consumer Finance Protection Bureau chief Richard Cordray. Both are party retreads, and Ohio leans center-right, so it would seem safe to assume that Republican DeWine would have the edge.

I say not so fast and here’s why: DeWine is associated with current Ohio Republican Gov. John Kasich, an outspoken critic of President Trump. The Ohio GOP is split between the Kasich and Trump camps. Trump voters are unlikely to be motivated to vote for DeWine, because they see him as part of the party that is anti-Trump.

Meanwhile, Georgia has taken center stage in gubernatorial contests due to a progressive Democratic African-American woman running against the GOP secretary of state. Georgia has been reliably red for a while now, so the fact that Democrat Stacey Abrams is not just competitive, but in striking distance of Republican Brian Kemp, should cause people to take notice.

Regardless of the outcome in Georgia, this race has put the debate over voting rights in the national spotlight. Secretary of State Kemp has jurisdiction over election regulations and has refused to recuse himself, even though he is running for governor. Accusations of voter roll purges and voter suppression efforts – especially within the African-American community – will be part of the narrative if Abrams loses. If Abrams wins, expect Democrats to point to her campaign as a model for party success.

All of the races are close, but for different reasons. It will be a long night come Tuesday, going into Wednesday morning.

Governing Magazine, which reports on state governments, lists the Colorado, Maine, Connecticut, New Hampshire and New York state Senates as tossups, while rating New Hampshire as the only state with a House chamber up for grabs. Democrats will not undo the major GOP advantage in state capitols across the country overnight, but it does seem Democrats are slowly but surely turning the tide. This could give Democrats more influence over redrawing congressional district lines in 2022.

There are many more GOP-held districts in tossup territory than Democratic-held seats. California and Pennsylvania are two of the most important states to watch in the contest for control of the House.

The combination of GOP retirements and Republican House districts won by Hillary Clinton in 2016 will be a factor if Democrats can pick up seats in both California and Pennsylvania. Furthermore, Pennsylvania has a unique attribute in that its congressional district map was thrown out and lines were redrawn favoring Democrats.

House seats filled during special elections over the last two years are also important to watch. There was a great deal of hoopla around these races as being indicative of midterm outcomes, but that theory does not seem to be holding up. Most matchups seem to favor whomever won the original special election, and Republicans won most of those contests. Don’t expect seats won in special elections to give insight to any national trends.

My prediction is that the House will switch from Republican to Democratic control by a narrow margin.

There is no question the fallout from the Senate confirmation hearing for now-Supreme Court Justice Brett Kavanaugh had a direct impact on the competitiveness of Senate races. Democrats got dragged down by their nasty conduct surrounding the hearing, which also fired up Republican voters who were previously not as energized.

Arizona’s open Senate seat being vacated by retiring Republican Jeff Flake and Nevada’s Senate seat occupied by GOP incumbent Dean Heller are ones to watch, because both could flip from Republican to Democrat. However, Democrats are likely to lose their Senate seat in North Dakota, while Indiana and Missouri are too close to call.

My prediction is that Republicans will continue to hold the Senate majority by a narrow margin.

What to watch for

Turnout is historically lower in midterms, but early voting is outpacing 2014 numbers significantly in most states that offer it as an option. The president’s party usually loses seats in midterm cycles as well.

However, 2016 proved that historic trends might not continue to hold up as electorate behaviors are shifting. For example, Democrats usually have low turnout during midterm elections, but seem to be energized more than in previous years.

Electtion night is sure to have some surprises in store for us. Regardless of the outcome, the results are unlikely to produce a majority with a clear mandate.

The Senate will likely continue to be a chamber filled with tensions surrounding presidential appointees and hemmed in by chamber rules. Functionally, the federal government will remain status quo, doing little and getting even less done no matter which party comes out on top in the elections.